Bitten by deadly snake, she lay unconscious for 3 days after anti-venom injection failed to help… 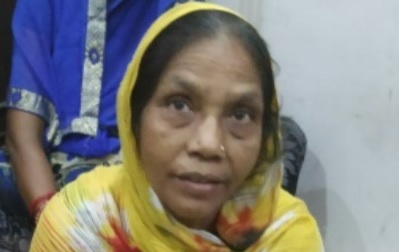 “Greetings to you in the precious name of our Lord Jesus Christ! Thank you so much for your intercessory and financial support. We are receiving outstanding reports from our harvest workers in the field.”

“Sumitra (above & below) was bitten by a snake and was no longer conscious when taken to the hospital. There the doctor injected her with anti-venom, but after a half hour she failed to wake up. The doctor informed the family that nothing else could be done for her, and that she should be taken home. At home, Sumitra lay unconscious for three long days while her family, dreading the worst, hovered over her.

Her family then decided to call for our Elijah Challenge workers. Considering her very dire condition it would have been very risky to attempt to minister to Sumitra. But our workers went with great boldness and ministered to Sumitra in the amazing name of Jesus Christ. She then regained consciousness. The family believed and accepted Jesus Christ. Witnessing such an extraordinary miracle, even the neighbors put their faith in the Lord Jesus!”
. “Ajit (below with his wife) and most of his family members were under siege by demons. At night especially when the family tried to sleep, the attacks began and kept them awake. They sensed the demons were somehow sucking out their blood, making them physically weak and from day to day thinner and thinner. They called for sorcerers who came and performed sacrifices and mantras in their home, but in vain. Then they sought out our Elijah Challenge workers who came to their home, spending a night rebuking the demons in Jesus’ name and ministering to the family. They were then delivered from the attacks. Ajit and his wife accepted Jesus Christ.”
. “For a long ten years Balmati (below) had painful arthritis. Her suffering made it very difficult for her to work. She had been treated at hospitals and by several doctors but without any relief. She had taken prescription drugs including ayurvedic medicine—costing her a lot a money—but to no avail. It was a difficult struggle for poor Balmati. Then our Elijah Challenge workers came to her home and ministered to her in the name of Jesus Christ. The Lord touched her, and within a few days she was miraculously healed from her arthritis. She accepted Jesus along with her husband.”
. “Prasanti (below) was demonized and acting like a madwoman. Her family couldn’t keep her at home anymore. The poor thing would cry and scream. Some sorcerers made promises to help her and took non-refundable payment from the family in advance. But their promises came up empty. Prasanti’s parents asked our workers for help. They came by and with authority rebuked the demon in Jesus’ name. Prasanti was then set free and delivered from the unclean spirit. The family believed on Jesus Christ as their only Lord and Savior.”
. “For most of the time, an elderly man named Laxman Naik (below) felt a terrible burning sensation in his body. It was very difficult for him to go out to the fields to work. It had been like this for five to six months when he came across one of our believers who introduced him to our workers. After our workers ministered to Laxman in Jesus’ name, the burning sensation disappeared. He accepted our Lord Jesus.”
.