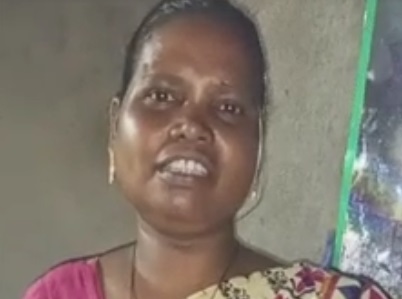 “Thank you so much for your intercessory and financial support. I have received very powerful reports from our harvest workers here in India.”
.

“Bimala (above & below) had breast cancer for the last three years. She had already spent so much money for expensive treatment at her local hospital, but her condition went unchanged. But after our Elijah Challenge workers came and ministered to her in the supernatural authority and power of the name of our Messiah Jesus, she was miraculously healed of the breast cancer. Bimala then put her faith in Jesus, and her entire family accepted Him as their only Lord and Savior.”
.

“Over a period of six months, Sushila Bhoi (below) was mentally disordered. She could not remember a thing. Without informing her husband, she would just wander off. Her husband took her to see a doctor who prescribed medication for her. But after a month of taking the drug, there was no change. But her neighbors knew about our Elijah Challenge workers. After they were contacted, they went to Sushila’s home and ministered to her authoritatively in the name of Jesus Christ. She was marvelously delivered from the mental disorder. Both she and her husband then accepted Jesus Christ.”
.

“For the past twenty years, a woman named Purnima (below) had suffered from hemorrhoids. During that time she been treated by many doctors at many hospitals. But her hemorrhoids would not relent. She also tried ayurvedic as well as homeopathic medicine, but both to no avail. After having spent a huge amount of money for all these various treatments, she was not well. Finally she heard about our Elijah Challenge workers, and contacted them. They went to Purnami’s home and ministered to her in the wondrous name of Jesus Christ. She was then miraculously healed from the hemorrhoids. She then believed and accepted Jesus Christ.”
.

“For a long time a man named Bhudhuram Munda (below) had a heart condition, making it difficult for him to breathe and to walk. Treatment with prescription medication by a doctor did not help. Then our Elijah Challenge workers came and ministered to him in the name of Jesus. Bhudhuran’s heart was miraculously healed, and he was able to breathe and walk normally. He then accepted Jesus as his Lord and Savior.”
.

“Suna (below) had severe pain all over her body due to arthritis. She was taking prescription medication regularly, and without it she had difficulty surviving even a single day. Then our Elijah Challenge workers ministered to her in the powerful and authoritative name of our Messiah Jesus. She was marvelously healed from the arthritis, and accepted Jesus Christ as her personal Savior.”
.

“Laxmi’s (below) body shook uncontrollably, making it difficult for her to work and even to eat. She had consulted with the doctor in her village, but he could not diagnose the reason for her shaking. He advised her to go to the more advanced hospital in the capital city of Bhubaneswar, but coming from a poor family Laxmi could not afford it. Then they heard from the village chief about one of our house churches in their village. Laxmi went there with her husband and received ministry in Jesus’ name from our workers. Praise the Lord, she was wonderfully healed and the shaking totally ceased. Both Laxmi and her husband then believed and accepted Jesus Christ.”
.