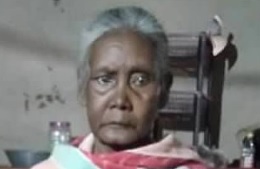 “During a discussion with our harvest workers in the state of Chhattisgarh, I learned that it has been very badly affected due to by COVID-19. Many servants of God there have passed away from the virus. The media in India however have not reported it. But praise the Lord that our Elijah Challenge workers are continuing to bear fruit for the gospel. Please uphold them  in prayer, that they remain invisible to the authorities as well as to the virus.”
.

“An older woman named Sima (above & below) had diabetes and high blood pressure: two well-known comorbidities for COVID-19—especially for the elderly. Her condition was already very serious…she was bedridden and couldn’t talk or move. She had difficulty breathing. But when our Elijah Challenge workers came and ministered to her in the incomparable name of Jesus Christ, she was supernaturally healed. Very grateful to the Lord, Sima’s entire family accepted Jesus as the only Lord and Savior.”
. “Young Rakesh (below) was mentally ill. His parents had brought well-known sorcerers one after another to treat him but none of them could help. One of them was actually performing a sacrifice for him at the moment our Elijah Challenge workers arrived. They left without ministering to him. Two more sorcerers came, but left empty-handed. A few days later Rakesh’s father went and summoned our workers to come back. When they ministered to him in the wondrous name of Jesus Christ, Rakesh was completed delivered from his mental illness.”
. “For two years Rima (below) had arthritis, making it very difficult for her to walk and get around. She had tried medication from her doctor but there wasn’t any change in her condition. In succession she then tried allopathic medicine, homeopathic medicine, and then local medicine, all of which failed to help her. When our Elijah Challenge workers showed up and laid hands on her in the name of Jesus, she instantly felt God’s supernatural power in her body. At that moment Rima was totally healed from the painful arthritis. Her entire family came to Jesus.”
. “In a village called Harekrishnapur, young Lipi (below) suffered from tuberculosis. She had already been under medical treatment for a year. Her father then took her to yet another doctor who prescribed more medicine for her. After three months Lipi still did not improve, but instead was getting weaker and weaker. Then our Elijah Challenge workers visited their home to minister to her. Within a week Lipi was well. Her parents accepted Christ.”
.