Pastor Albert Kang of Malaysia is The Elijah Challenge Coordinator for Asia.

Other reports by Albert Kang

The Healing Rally at Dharabasail was more like a local village carnival. Flags and lights were hung along the streets. Right before the entrance, which was a bamboo bridge that led to the church, a special gateway was raised and decorated with many colour lights. Every night, before the official rally time which was 6.00 PM, crowd of villagers and outside visitors thronged into the venue.  Passing by a large make-shift kitchen where foods for all the participants were prepared, the crowd moved toward an open area facing a beautifully decorated stage. Sitting upon straw mats that were carefully laid upon bare ground, under a skilfully constructed canvas tent, the participants carefully divided themselves to male and female sections. Some of the trained pastors and church leaders were serving as musicians and worship leaders before they healed the sick. There were no song books or electronic visual devices to project the songs! Everybody seemed to have memorized all the Bengali worship songs. The participants sang with great enthusiasm and entered into deep worship. Surprisingly, for a Muslim country, the government of Bangladesh gives much freedom to the practitioners of other faiths. For the three nights of evangelistic rally, the loudspeakers blasted the village with worship songs and Muslim and Hindu villagers, who did not attend the healing rally, also had the opportunity to listen to the sermons and healing testimonies.

Night after night, I challenged the people to repent of their sins and accept Jesus as their Savior. On those three nights, different interpreters conveyed this important message in Bengali. The first night, Rev. Jonathan Munshi, the General Superintendent of the Assemblies of God in Bangladesh, interpreted with much power of the Holy Spirit. The people responded to the salvation call and many were saved. The second night, Rev. Phanuel Pandey, the AG National Youth Director, was the interpreter. Like his superintendent, he was fast and accurate. During that night, the crowd had increased in size and the message of salvation continued to appeal. As Rev. Phanuel interpreted the salvation invitation, hands shot up from among the crowd. Many subsequently stood up to repeat the salvation prayer. The third night, the tent canvas wall was pushed right to the back so as to accommodate more people. More than 700 villagers attended and according to Brother Paul, this was their record crowd. Rev. Proshanta Roy, the Senior Pastor of Maranatha Assembly of God in Faridpur, interpreted my message with similar intensity and power. The Holy Spirit was present and souls were saved.

Every night, after the salvation prayer, I moved quickly to challenge the congregation to experience the love and power of Jesus through healing miracles. In a country where basic healthcare is available only to the minority who can afford it, health needs are an never-ending concern. There were too many infirmed people for the trained believers to lay their hands and so distance mass healing was the appropriate method to begin the healing sessions. For the infirmed Christians, the interpreter of the night led them in a prayer of confession and repentance before they received the healing from the Lord. The healing miracles experienced by both the infirmed believers and non-believers proved to every villager in Dharabasail that Jesus Christ is the only way to God the Father and that it is only the Son of God who can grant them everlasting life.

The trained believers stood in a long row at the front facing the congregation. They were trained to exercise their faith when the commands for healing were given. With determined faces and hands stretched out with firm resolve, these men and women of God followed the Bengali commands loudly. Across the hall, the infirm stood with their hands laid over painful or diseased areas of their bodies. Some of the infirmed Christians shut their eyes and repeated the commands, not realizing that they were not praying but applying the authority and power to heal in the name of Jesus. Brother Paul Sujit and Pastor Proshanta were the two leaders who took active roles in helping me to command in Bengali. On many occasions, I would command in English and then the interpreter would command in his language. Then the trained believers would follow. However the process was too tedious and slow. And so in this Healing Rally, I decided to ask our two leaders to command directly in Bengali instead. The people had been told that the power of healing did not reside with me individually but with the Church as a whole. Therefore, when they did not see me commanding, they had no questions about that at all.

After the commands stopped and everybody quietened down, the infirm were instructed to check their health conditions. Having been instructed beforehand to testify when healed, one by one began to step up onto the stage to testify about their healing miracles. We had more people healed on the final night because of the sheer number of people in attendance. After every testimony, the congregation responded with loud applause. Seeing so many people healed, Pastor Proshanta told me later that in all the years of his ministry, he had never seen anything like that before. He was very impressed by the healing results and later requested to be an integral part of The Elijah Challenge. Some of the testimonies were quite impressive and accompanied with deep emotions and tears.

After the distance mass healing, the remaining infirmed people were invited to advance to the front and stand before each of the trained believers. The pastors and trained leaders laid their hands upon those infirm standing in front of them. They followed the commands closely and exercised their authority to heal in the name of Jesus. After the commands had ceased, they asked the infirm to check their conditions. For three nights, the healing results were remarkable. Headaches were gone and so were the shoulder and arm pain. Back pain disappeared and arthritis no longer restricted the movement of the joints. Knee pain left and those healed bent their knees rapidly to prove that they were healed. People who could only limp were healed. The healed were streaming up to the crowded stage to testify.

A bald man rushed out of the crowd and fell to the ground screaming. At first, I thought he was possessed by demons but upon further investigation, he was just desperate for God to heal him of his chronic skin disease. The trained believers promptly ministered to the poor man and he apparently found relief and calmed down.  Another man who had a stroke, was suffering from pain in his arms and legs, sat on a chair waiting to be healed. After the trained disciples laid hands on him, the pain left and he got up to walk. He walked back and forth, swinging in arms, much to the amazement of all those present. Many testimonies were made about back pain being miraculously healed. The elderly testified about healed knee problems most probably triggered by arthritis. Those who had chest pain and asthmatic condition, found obvious relief and testified about their healing miracles. Frozen joints in the arms were also healed and the recipients of this healing swung their arms to test the result of their miracles. There were many more miracles that happened after the healing rallies. Brother Paul, our elderly lay leader who was responsible for the launch of this series of evangelistic rally, continued to heal a long line of infirm with a team of dedicated trained ministers, way beyond the closing time.

This was no ordinary healing rally that we had experienced in Bangladesh. We believe it was the beginning of something great in that country. Pastor Proshanta shared the observations of many of his colleagues – “We have never experienced such types of healing miracles before in Bangladesh”. Ever since we returned to Malaysia, we had received reports of miracles happening in the various churches of the trained pastors and leaders. Pastor Proshanta has asked to become more actively involved with The Elijah Challenge and most probably become one of the coordinators in Bangladesh. Brother Paul Sujit promised to introduce the healing paradigm to his Anglican church. He is such a blessing to his people in Bangladesh and will definitely be an effective Elijah Challenger.

Grace and I have been invited back for another Healing Rally in 2012. Even though we have not yet agree, we know one thing for sure, is that for these pastors and church leaders, life will never be the same again in Bangladesh. 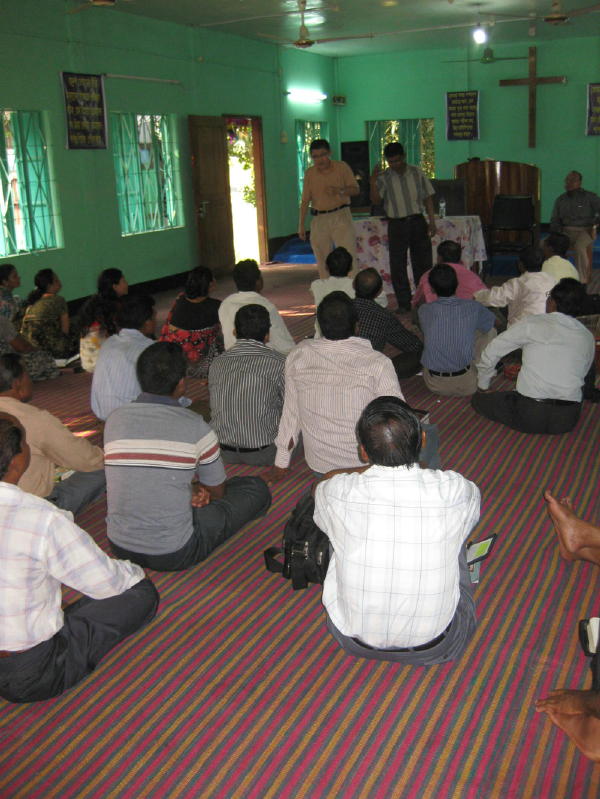 Pastors and Leaders gather to learn to evangelize with power 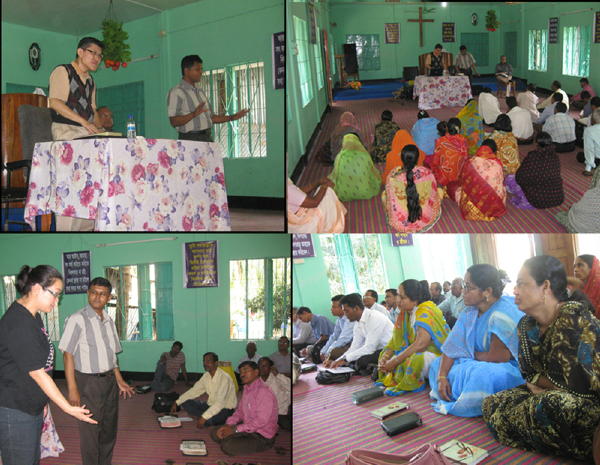 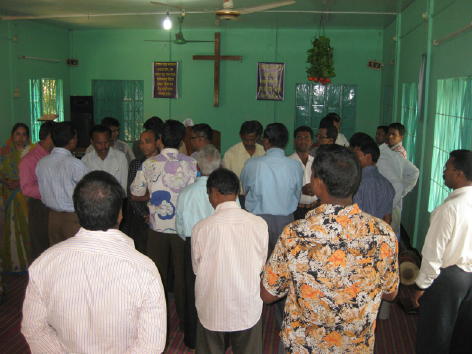 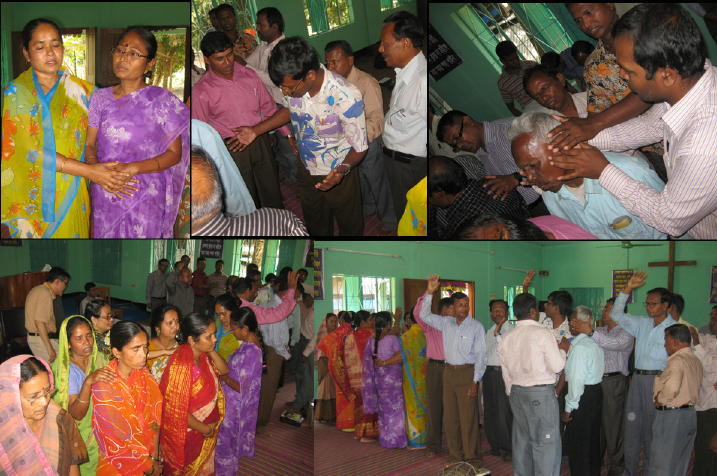 Exercising faith to heal in the name of Jesus 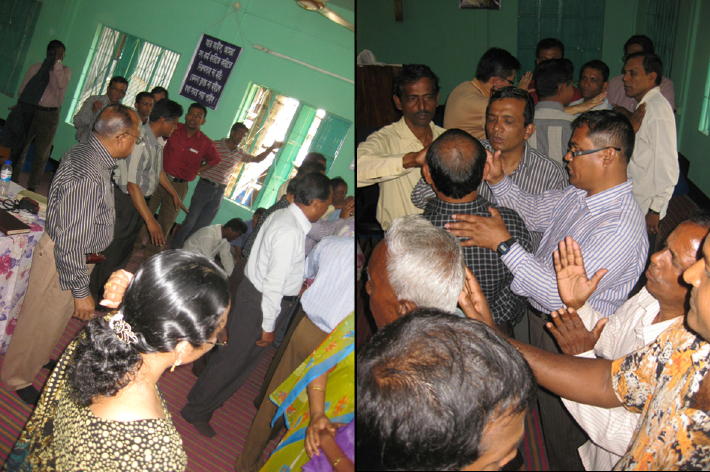 Commanding in the name of Jesus 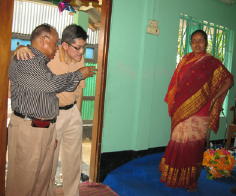 The sister’s neck and shoulders are healed 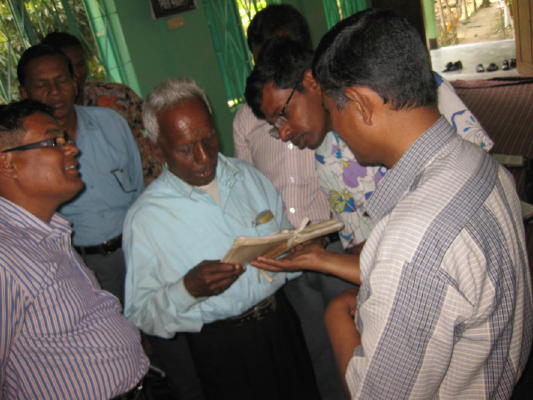 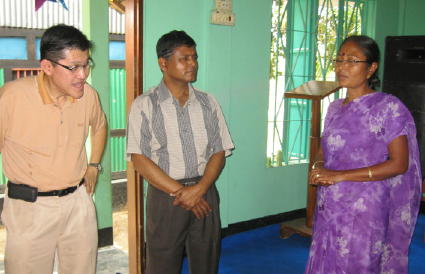 A sister testifies about her miracle 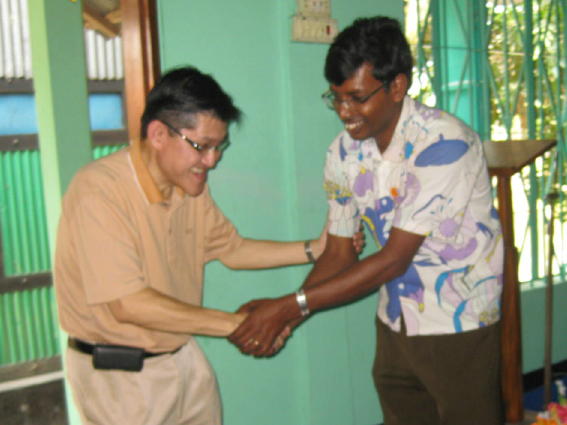 Pastor Auron is also healed by the Lord

Many of the pastors and leaders are miraculously healed 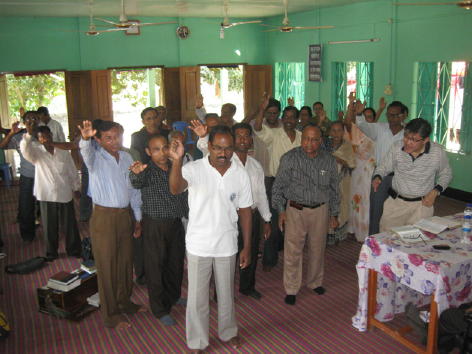 Practicum – Healing at a Distance (Luke 7)