Tribe persecuting Christians in Orissa is now being reached – March 2009

Please first read the amazing backdrop of this event

Tribe which initiated persecution against Christians in Orissa now being reached

A month before this event, Pastor Subodh wrote: “I am very grateful to God because in the district of Kandhamal in Orissa, this same tribe of people is very rebellious toward the Christians and they are the ones who are their main persecutors. The entire problem started in Orissa by that group of people in Kandhamal but praise God a few miles up in the mountains this same group is receptive to the Gospel, it is unbelievable. It is just a miracle of God and nothing else.”

“The Lord was so good and faithful to us. This was the first time in my life I was able to minister to such a great multitude. Also this is the first time I could experience the heavy anointing in my life during the evangelistic meeting. There were three thousand people who gathered.

Thousands of people accepted the Lord for the first time in their life, both Christians and non-Christians. The anointing of the Holy Spirit was so powerful on every one of them. I saw how people were confessing their sins with tears.” 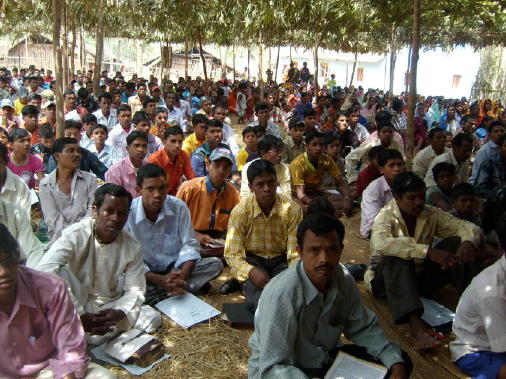 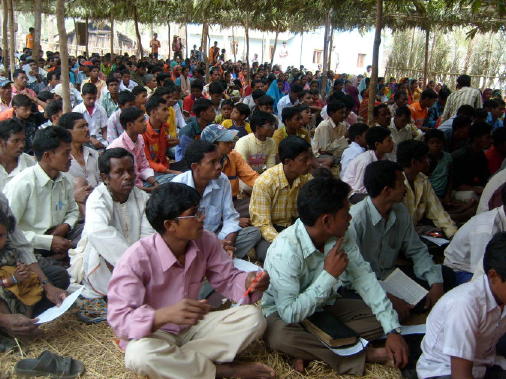 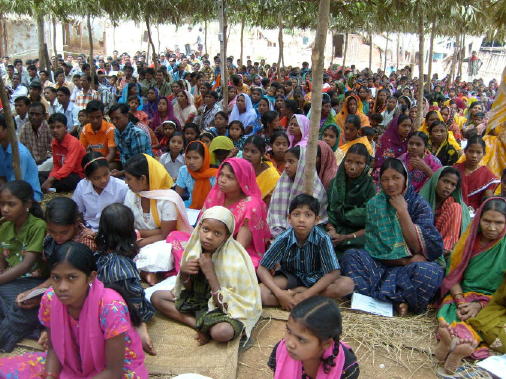 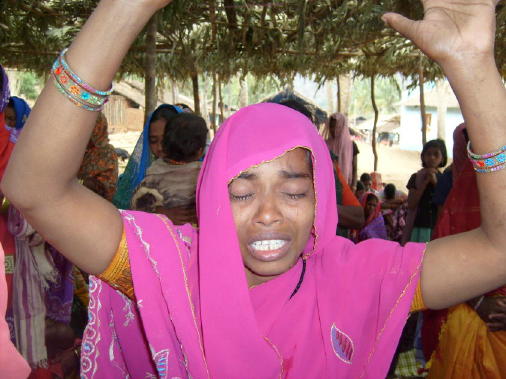 Above & below: Crying out to the Lord Jesus and submitting themselves to His Lordship 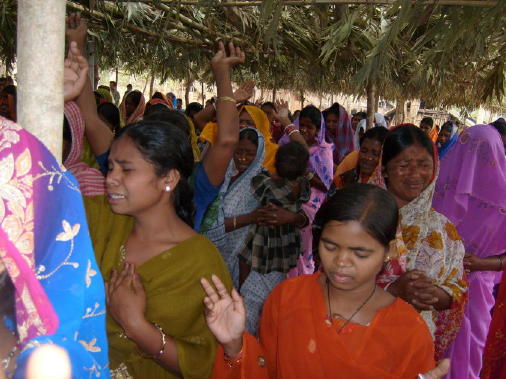 Some testimonies of miraculous healing

“The Lord’s healing touch came to every one of the infirm people. So many people were miraculously healed.

Drunks came and testified and so many people were receiving the Lord Jesus Christ with repenting from their sins and accepting the Lord in their life. Many of the youngest came forward and testifying that we won’t do the government job, instead we will serve the Lord.

Yes, God is so good and His work is so wonderful.”

Below are photos are people testifying that the Lord had healed them of their infirmities. 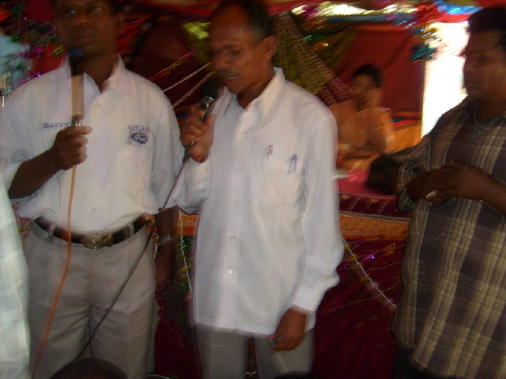 This elderly man had been suffering from pain in his teeth for a week. He came to the meeting with the pain. He believed that God would heal him. During the ministry of healing he was completely healed. 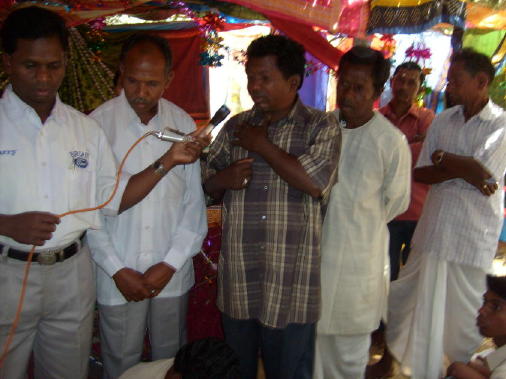 This gentleman had severe pain on the right side of his body. He was not able to lift his right arm. He had been suffering for one year. He had gone for medical help and was taking a lot of medication to no avail. God touched him at that very moment and he was completely healed. 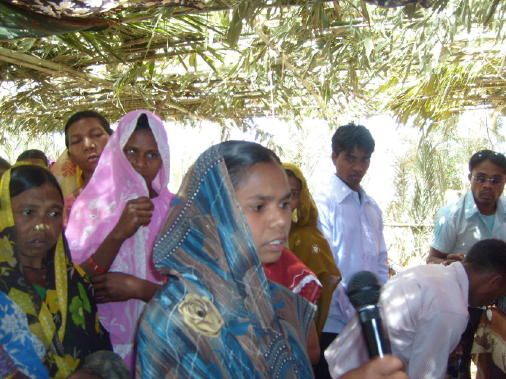 Sister Janani is a government worker. She was suffering from stomach pain and she usually had a fever. After receiving ministry, she testified that she was healed. She dedicated herself to God and promised to leave her job in order to do God’s work. 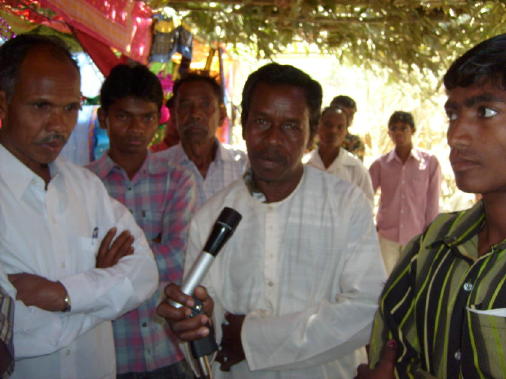 This gentleman had a stone in his stomach on the right side. God touched him mightily. At that very moment he testified that the pain had disappeared and that the stone had vanished. He rejoiced in the Lord! 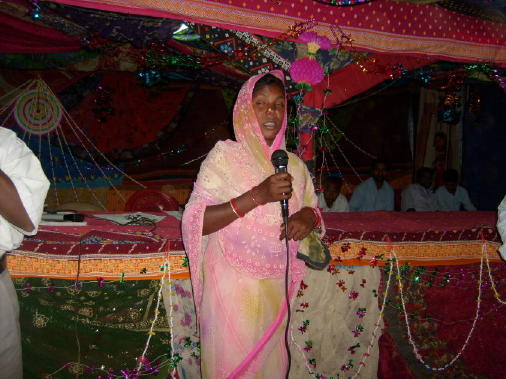 This sister was suffering from knee and joint pain. When I ministered to her she was touched by God and was completely healed. 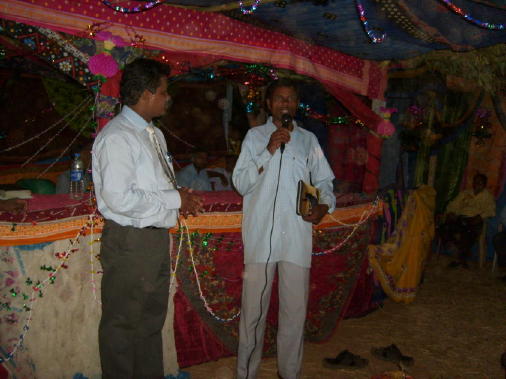 This brother was touched by the word of God. When I was ministering to everyone he experienced the mighty power of God. He felt free from all bondage. 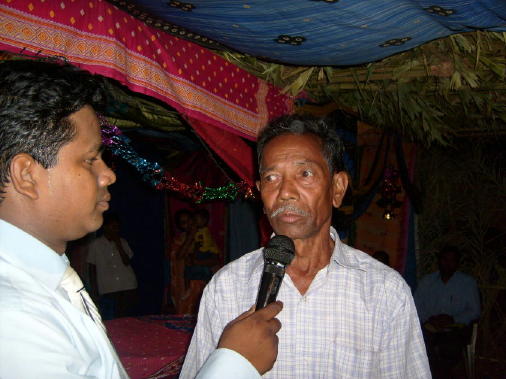 This man had severe chest pain. He could not talk and breathe properly. But God touched him and he was totally healed. 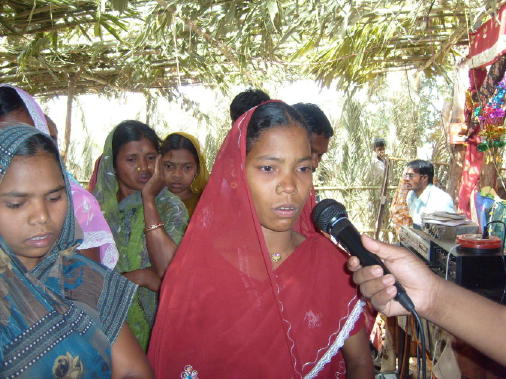 This pregnant sister suffered from constant pain and was unable to give birth. But after God touched her womb there was no more pain in her body. She believes that she will give birth to her baby. 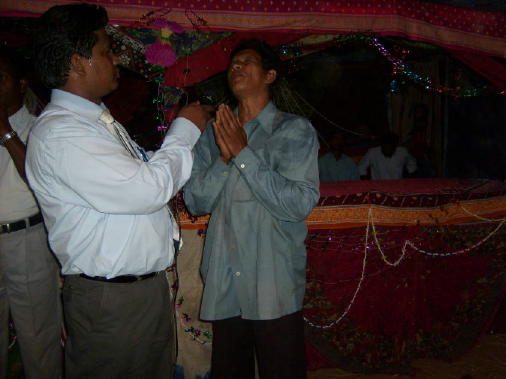 This man was an alcoholic. He never knew about Jesus. Whatever money he had he spent it on alcohol. But after hearing the message his life was changed. He testified that he will no longer sin against God. 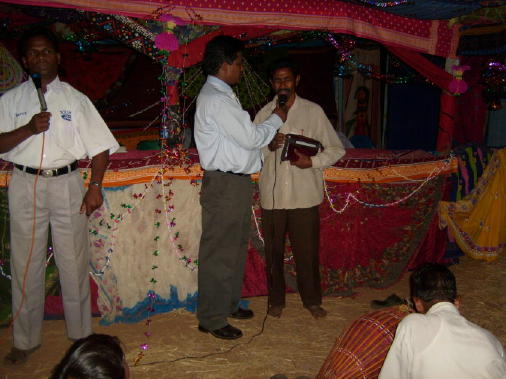 Some time ago this man had fallen from a tree and suffered severe head injury. His relative took him for medical help and he lived, but there was pain from top to bottom. After I ministered to him he felt free in his body.

“There were people from eighteen villages who participated in the evangelistic meeting. They were eagerly waiting for us. And those two days were memorable days for them. The farewell was so painful for them and us too; we cried. Those innocents did not even want to leave us. As we left, for half a kilometer they formed a procession with a band party.” 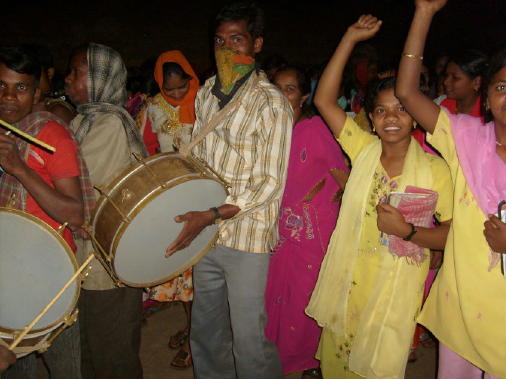 Villagers bidding us farewell as we left for home

“It was Jesus Christ our Lord who performed mighty things in Orissa. And only by His grace could we feel the fullness of joy in witnessing so many miracles.

They all are farmers here. They all do the same work—they go to the fields every morning and come back in the evening. One of the saddest things is that education for children is very poor in that area. When I asked about this they said that there are schools in that area up to fifth grade. However, there is only one teacher available and that teacher does not regularly go up the mountain to teach. So hundreds of children do not have education.

Usually they arrange an Annual meeting every year. They have a committee called Samillani. The main leader of the different villages took the initiative to arrange the meeting. Though they are poor they still did everything with their own income. They collected the money, rice, dal [a kind of bread] and they arranged the program. They even invited their own people, both Hindus and Christians. The meeting was fully orderly and we were amazed to see the unity among them. They have love, affection and sympathetic support for each other. So they are able to do it every year for the glory of God and for the extension of His kingdom.”

Initial obstacles on the way to the meeting

“A Maoist group had killed the leader of the RSS Hindu fundamentalists. Many of our relatives and other brothers and sisters called us and said that do not go to that place because in every districts the roads are closed. We prayed and left our home. Praise God nothing happened to us on the way.

There was heavy rain for two days from that day onwards. There was rain on the way. We were in a house for a few minutes and prayed to the Lord about the rain. I shared with my co-workers that the thunder and the wind obeyed the Lord. It will stop in the same way and it will not happen again. And surely God will do the same for us. After prayer [and rebuking the storm] we saw a big change in the weather. Nothing stopped the work of God. Even the surrounding areas of Nundrum had rain but praise God not one drop of water fell on the ground [in our meetings].” 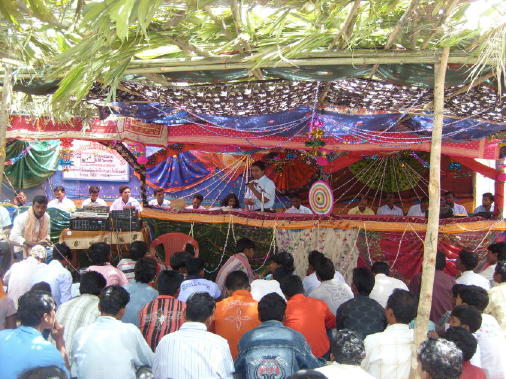 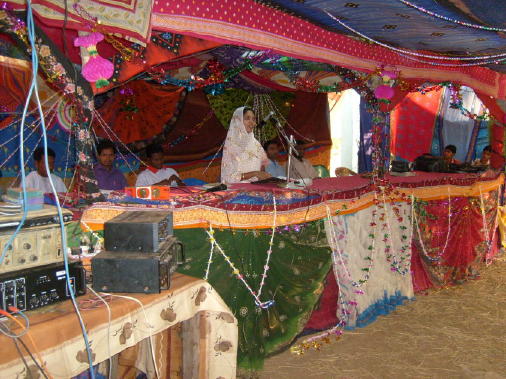 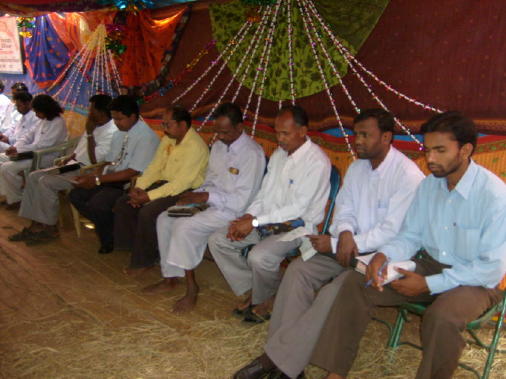 The local leaders who organized the meetings

Miraculous healings at an unexpected stop along the way

“Before reaching Numdrum we stopped by a Catholic village called Mohona which is located 10 kilometers from the road. We had never been to that village before and we did not know anything about it. But God had a plan for us. One sister named Sujata heard that infirm people had been healed by God as I ministered to him. They called me and said, “Pastor, we want you to come and minister. Another thing is many sick people are here and we want to bring them to you in Chandragiri,” a place where we stayed for two days during the big Numdrum meeting. I told them that there was no need for them to come to us and that we would go there to minister them all—it was just a 10 kilometers from where we were. There were a total of four families who waited for us.

1. One mother and her son came from 150 kilometers away from a place called Ashrayagada. Her condition melted our hearts. She was undergoing a pathetic situation, having pain in her heart for her family. And her son Bliason had jaundice. Month by month he suffered. After we ministered to them her son was completely changed in his body.

2. Sister Sujata had a snoring and breathing problem for three years. She was very powerfully touched by the power of Jesus Christ and was completely healed.

3. A brother named Asaranta Naik who came from 10 kilometers away from a Mohona village called Liligada. After he felt the Lord’s healing touch in his body he testified, “when I heard about God’s healing power I just thought, ‘if I go there I will be healed.’ When Pastor ministered to me some thing happened in my whole body. I had hemorrhoids but now I have no more. Hallelujah!

4. Sister Manjuli Mahanad was suffering from back pain and pain in her legs. For many days she was not able to sit and even kneel. But on that day she sat right after I came and when I ministered to her she knelt down for fifteen minutes. Praise the Lord.

5. This mother Parsrila Naik was suffering from headache and also had a problem with her eyesight. After I ministered to her, she testified that she had been touched by the Lord and at that very moment she felt free in her body. Praise God that she was completely healed.

When we were on our way back home to Bhawanipatna after the Numdrum meetings, Sister Sujata called to tell us that they all were so happy and well by the grace of God. She thanked us and asked us when we would go their way again, for there were many more there who needed the Lord’s healing touch.”

Below are photos of some of the Mohona villagers who were healed. 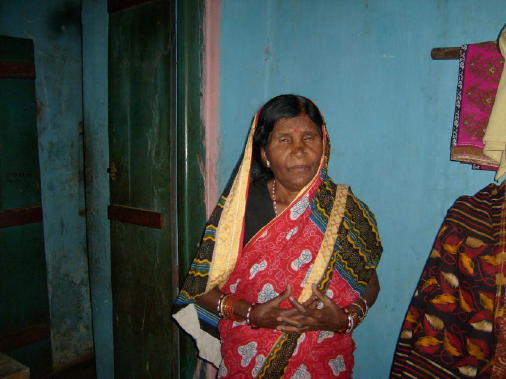 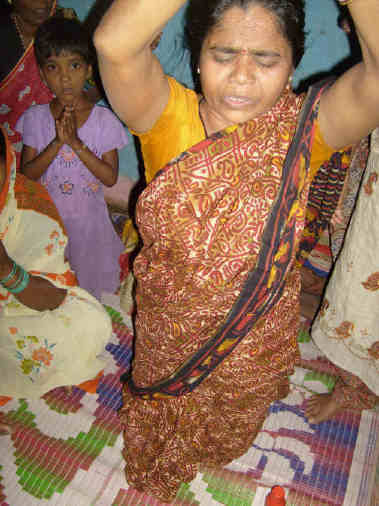 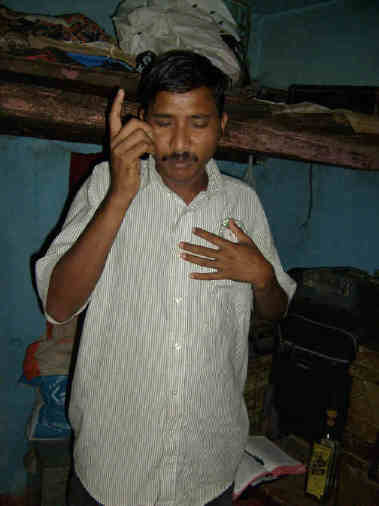 In the aftermath of the Event

“We just received a phone call from Pastor Suna Hingu Raita, Nundrum, and he gave us some feedback. Oh what a wonderful God we serve.

He said, ‘We are so privileged to have you in our annual program (2009). Though we have arranged several meetings in every year but we have never seen anything like this. This meeting is totally different from before. This meeting brought a revival to our community.’

And he was saying that the word of God was so powerful and the presence of God was quite unique. All the participants were so delighted with this powerful service. We will invite you again and in the next meeting the gathering will be double the size of this time.”