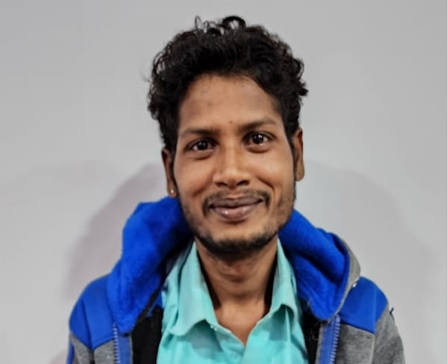 “A young man named Manthan Rout belongs to a high cast Hindu family. For three years he suffered from a severe mental disorder. According to his parents, it was the result of black magic sent by a sorcerer. Initially Manthan’s father had taken him to several hospitals and to sorcerers to be treated, but it was all in vain.

After a few months, his condition worsened. Manthan did not sleep anymore, roaming here and there day and night. He could no longer recognize people, even his own parents.

Three times within a period of two years he tried to kill himself. His father is a carpenter and among his tools is a cutting machine. The first time Manthan used the tool to cut open his neck, leaving him unconscious for a few days in the hospital. The second time he cut a vein in his left hand and in the process broke the hand. He was admitted to our local hospital in Bhawanipatna where the doctor was unable to reset the bones in the hand. His father had to take him to the bigger hospital in the city of Cuttack.

In his third suicide attempt Manthan cut open his stomach causing very severe bleeding. Again he had to be hospitalized. Below are photos of the three areas where he cut himself.

Manthan would also beat his father and mother. Finally he had to be restrained with chains for most of the time.

Somehow the family heard about us and asked us to come to their home. Along with a few of our believers we went and ministered to him with authority in the wondrous name of our Messiah Jesus. That same night Manthan was able to sleep for the first time in a long while. Sudden changes in his behavior were evident the following day. Within a few days Manthan was totally delivered and his mind restored.

He and his family accepted Jesus Christ as their only Lord and Savior.

We rejoice to see how his life has changed. The Lord is so faithful and gracious to use us in such a way.”