Dr. Paul Rains is a physician practicing in Missouri who trained with Brother B in Evangelistic Healing Crusades they held in Togo, West Africa in January 2002. Since then the Lord has used Dr. Rains in miraculous healing as he preaches the gospel in overseas Crusades. Dr. Rains below reports on his meetings in India, where he ministered in March and April, 2003. 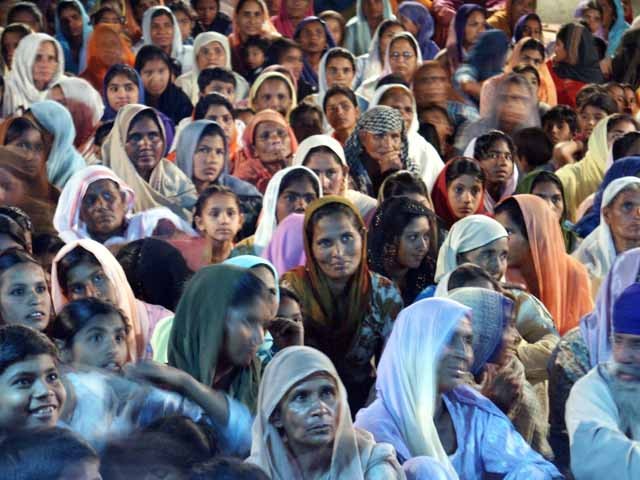 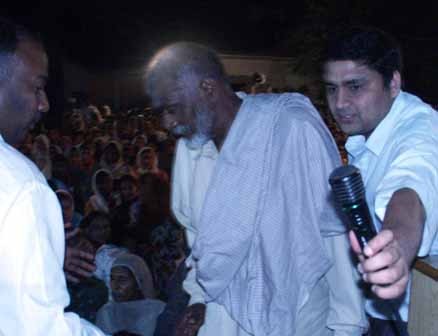 Blind man testifies he can see

“We held two open air meetings in Punjab—one in Makhu and the second in the large city of Moga. Between 275 to 300 received Jesus Christ as Savior in Makhu and about half that many in Moga, a total of around 400 to 450 in all. These meetings were attended by Sikhs and Hindus among others. God demonstrated His power by miraculous healings, which pointed honest seekers to the reality of the true God of redemption. On the first night in Makhu one elderly man regained his eyesight after years of blindness.

On the last night in Moga one young man drove up on a motorcycle and said he was going to come back with others to disrupt the meetings. Many of our young men stood at the entrance ready to intercept them if they arrived, but they never did show up. We later learned that Hindu dissidents were in the audience and reported the event of the meetings to the newspapers. They hoped that the sympathetic anti-Christian media would generate problems for our evangelistic efforts.

Reporters were especially interested in the physical healings. They interviewed those who testified in the meetings of healing, and could not find any case that was not valid. So they reported this and gave a positive account of our meetings which was published all over Punjab, one of the states of India. God thwarted the enemy’s attack! The claims of Christ were broadcast throughout the state, reaching a much greater population than those present at the meetings.”

Dr. Rains reports on his meetings in September 2003….

This week I have returned from glorious evangelistic meetings in Punjab, northwest India. These towns are right on the Pakistan border.

In Guruharsahai we expected smaller crowds and smaller effect. We were pleasantly surprised when the crowds doubled each night to 3000 people and literally hundreds found Christ as Savior. Even after return to New Delhi, we received phone calls of amazing testimonies.

The larger city of Ferozepur is where we expected the huge crowds and larger effect. We were disappointed that this did not happen, for a variety of reasons. First, the man organizing the meetings for us was in the hospital with heart disease. Second, harvest time started that very day that the services were meeting. In planning, we anticipated that harvest time would be several days later. And thirdly, the region is known to have competition rather than cooperation among their pastors. We will plan one day to sponsor a pastor’s conference in that region to address some of those issues and encourage pastors toward more effective ministry.

Even so, we leave Ferozepur with 132 new commitments to Jesus Christ.

To make a commitment to follow Christ when you belong to a Hindu, Moslem, or Sikh family requires much sacrifice as it will inevitably mean ostracism from the family. So pray for these new believers.

All told, just over 1000 people found Jesus Christ as Savior on this trip! So as I head home on the plane I have the sense of “mission accomplished!”

I do two mission trips a year. The next is not fully planned, but we are considering having three nights of meetings in Jalander, a large city in Punjab, and then return to Manipur where we were just over two years ago. The numerous Baptist churches in those beautiful hills have invited us to return. Last time the attendance reached 10,000 each night. Pray as we seek God’s guidance on this next trip.

After arriving in New Delhi we took a train to Jalandhar in Punjab for the three days of evangelistic meetings as scheduled. A very conservative estimate is 300 accepted Jesus Christ as savior during those three days, perhaps the real number is much higher. In any case that alone made the trip worth all the effort!

Our team scattered on Sunday morning throughout churches in the city. Jim Stewart along with Lana Jennings preached in three churches that day finally finishing at 9 p.m., and they led six people to Christ. We all developed special relationships with individual churches and pastors as we broke off in ones and twos.

God showed His grace in several physical healings as well. Especially in places in India and Africa where I go this tends to get the attention of people that the God of grace is the true God. People of Hindu and Musl__m backgrounds then take more seriously the gospel message when they witness the powerful grace of God.

One lady came from a village outside of Jalandhar with paralysis and inward deviation of the left leg and foot. The whole village knew of her deformity for several years. Her leg was straightened and made normal. She gave her life to Christ as did several in her village. There were many other testimonies of the grace of God.

As I write this report I am on the plane between Delhi and Amsterdam, returning home. Roberta Cook, my wife Julie and I feel a sense of accomplishment in that over 1000 people made a decision for Christ. These were new believers mostly coming out of Hinduism and Sikhism.

On October 8 we landed in Delhi and were received by our host, Pastor Simon Haqq. We stayed in his house and ministered to his church on Sunday morning. That night we took an overnight train to the city of Bathinda where we were met by the organizer of the meetings in that city, Pastor Wilson.

Pastor Wilson took us to a hotel in Bathinda and for the next three nights we witnessed the amazing grace of God.

Julie led a woman’s Bible Study one morning. The three evening meetings were well attended and on the first night we had 40 new believers, 35 on the second night and too numerous to count on the third night. We placed a very conservative figure of 150 that night, but it must have been much more.

After the third meeting in Bathinda we traveled by car at night to Jahlander where we stayed in a hotel. This was our base as we commuted three nights to the city of Nakadhar where we had wonderful open air meetings. The crowds grew each night to around 3000 the last night. On the first night we had 100 decisions for Christ, 200 on the second night and an amazing 500 on the third night!

The audience was a mixed group of adherents to tribal gods, Hindus, Sikhs, and Musl__ms. Also Christians were present who helped organize the meetings. Many people testified of miraculous healings by the hand of God during those gospel meetings. Many people asked us to pray for them after the meetings. The lines for prayer were long, and Roberta Cook spent much time in praying for people individually.

We were all impressed by the simplicity of faith and the love that people demonstrated. We were literally swamped by requests for prayer and we would spend much time after each meeting praying for individual people.

As we now sit here on the plane we have a sense of accomplishment in seeing God do miraculous transformations in Punjab.

I am deeply honored to be invited by two large cities in north India to hold city wide evangelistic outreaches. Both cities are in Punjab, near the Pakistan border.

We will have four evenings of open air evangelistic meetings. I am told that this will be an historical event. Nothing like this has ever been attempted in AMRITSAR. I am humbled to be invited as the featured speaker. Please pray that the Word of God will penetrate the hearts of those who listen. Pray that thousands will be born anew through Christ.

BATALA is another large city near Amritsar. A large number of churches here have also banded together to arrange for this city wide outreach. A young pastor first approached me about Batala last year. He projected a massive turnout. Please pray for a large harvest in Batala, where we are also scheduled for four nights of open air meetings.

In addition to large harvests in these cities, we pray that these events will also be a means to begin strong cooperation and unity among churches and believers.

Dr. Paul Rains is a physician practicing in Missouri who trained with Brother B in Evangelistic Healing Crusades they held in Togo, West Africa in January 2002

“Mission accomplished! I’m writing this on the airplane returning home. After four evangelistic open air meetings we have 693 new commitments to Jesus Christ:

The last two were tiny villages we saw in the daytime.

In addition there were many wonderful accounts of healing of various diseases. We also visited in many homes, individually prayed for hundreds of people, and spoke to school children in classrooms.

More than one person told me they sensed a special need to pray for us on this particular trip. All three of us were in a store in a New Delhi shopping center. From there we went directly to our car. As soon as we closed the doors of the car we heard a tremendous explosion—a sound that later we learned would be heard around the world.

Later I was told that this was the top news story in the US. Instantly 25 people were killed and many others were injured. We missed the deadly explosion by 15 minutes.

Below is a photo I took of our team member Sonela in the shop that had the bomb which blew up this store and others in the market. This digital photograph was taken 35 minutes before the bomb exploded. After this photo Sonela looked at a couple of suits but did not try them on because they were obviously too large for her. We would have to have been within feet or even inches of the terrorist bomb.” 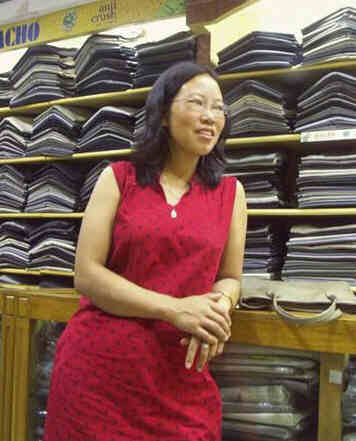