Documented Miracles in the Largest Campaign in the History of Egypt 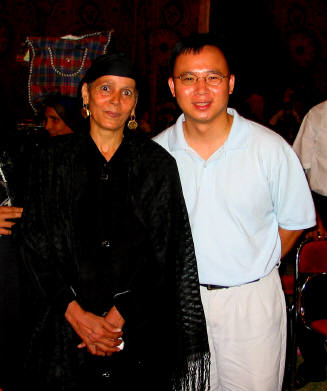 Back to Egypt 2002 Campaign webpage

Teammate Joshua Chen is an engineer who serves at Houston Chinese Church, the largest Chinese evangelical church in Houston. Just a few days earlier, before the Campaign began, he attended our Healing Encounter where workers were trained how to minister healing to the sick as confirmation of the gospel.

At our medical clinic after the Campaign began, he prayed over a woman who had been totally blind in her left eye for five years. The Lord restored her sight in the blind eye. At the Tent Meeting the next day, she gave her testimony to the delight of the large crowd. Never before had such a thing happened. Corroborating her testimony was a neighbor, a Campus Crusade worker named Mirvet, who confirmed that she had indeed been blind in that eye.

In a separate interview videotaped a few days after the miracle, she said that she was now able to see clearly through her left eye. She had gone to her eye doctor. After examining the blind eye he discovered that it was perfectly fine and functioning because apparently someone very skilled had performed an operation on the eye. When he asked her who had done it, she told him that it was God! (When the doctor examined her other eye that was supposed to be good, he wrote her a prescription to buy some eye drops for it.)