The name of Jesus Christ showed itself powerful this weekend at the Indonesian Full Gospel Churches in the Bay Area. Indonesia is the fourth most populous nation in the world after the United States with more Musl__ms than any other country. At a Saturday Healing Encounter, believers were taught according to the Scriptures how to minister healing in His name for the sake of the gospel. These are some of the miracles done in the name of Jesus after the Saturday teaching sessions and during Sunday services in Silicon Valley, Pinole, and San Bruno. 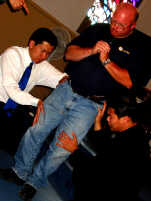 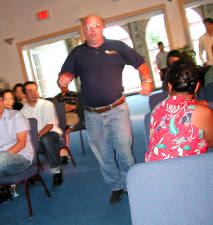 A new believer named Bob was brought to the meeting in San Bruno. Bob was born with cerebral palsy, and walked slowly and with difficulty. He came forward to the front and two believers laid hands on him, rebuking the infirmity in the name of Jesus. Immediately I told Bob to walk. He surged forward like a race horse out of the starting gate and walked very briskly down the aisle to the back of the church, circling the back pew and returning to the front without slowing down. “I haven’t been able to walk like that since 1965,” Bob told me excitedly at the front before the congregation. I instructed the believers to minister to him once more. Then I told him to go around the church again. He took off down the aisle and momentarily broke into a jog before circling back to us at the front! Although Bob was not completely healed, he was praising the Lord for the dramatic improvement he experienced in his body because of the name of Jesus.

A Chinese businessman named Yohanes from Jakarta visiting San Francisco for the wedding of his son came forward for prayer for pain in his elbow, his heel, and for pain in his knee when climbing stairs. As believers ministered to him in the name of Jesus, he was healed of all three infirmities. To demonstrate it, he climbed up the raised platform at the front without difficulty.

An elderly Chinese gentlemen who spoke the Hakka dialect had injured his back as a boy growing up in Indonesia. The injury had never healed properly, and whenever he arched his back he felt pain. A believer came forward to lay hands on him. After the prayer of faith in the name of Jesus, I asked him if he was better. He arched his back, and smiling, testified that there was no more pain!

At the Pinole meeting, I felt the Holy Spirit telling me that there was someone with an ankle problem whom He wanted to heal. I announced it to the congregation, and later during the meeting a young woman in her twenties responded, coming to the front. She testified that as a teen-ager she had injured her ankle. It had not healed properly, leaving her with a bad ankle that could not take much weight without pain. During the meeting the Lord had directly healed her ankle. No one had ministered to her. At the front before the congregation, she removed her shoes and put weight on her ankle in every conceivable way, from every angle. There was no pain. The Lord generally uses believers to minister healing to the sick, even as He uses us to preach the gospel of salvation. But there are times when He gently moves us aside and does the job Himself. He is the Sovereign God!

A young man had a bad back. Whenever he tried to twist his back from left to right and back, he felt pain. After I prayed over him the prayer of faith, he could no longer feel the pain when he rotated his back to the left and the right.

A middle-aged sister had arthritic pain in her shoulders, making it very difficult and painful for her to raise her arms over her head. After I laid hands on her shoulders and rebuked the arthritis in the name of Jesus, she was able to raise her arms easily over her head. Barely able to hold back her tears of gratitude to the Lord, she gave glory to God before the congregation.

At the Saturday Healing Encounter in San Bruno, a brother always felt pain in one of his ears during the loud and exuberant worship led by the musicians with their instruments—keyboard, guitar, and drums. At my invitation a college-age boy came forward to minister healing to him. I instructed him to put his finger into the man’s ear (as Jesus did in the gospels), to rebuke the infirmity in the name of Jesus, and to command the ear to be healed. Immediately I asked the worship team to go up to the platform to lead the congregation in a loud song of praise to the Lord. No matter how loud they turned up their instruments, the brother could feel no pain in his ear. At the Sunday service the next day, he was able to enjoy the loud praise and worship songs without any pain at all!

In San Bruno sister Kaini could not lock her knee in an extended position without feeling pain. I called forward a young believer named Priscilla to minister to her. She came forward a bit nervously and laid her hand on Kaini’s knee according to my instruction. Then I asked Kaini to extend her knee. There was no pain at all.

In Silicon Valley I called Linda, the wife of an evangelist, to come forward to minister to a middle-aged woman who felt pain in the joints of her fingers when she curled them into a fist. Linda held the woman’s fingers in her hands and rebuked the spirit of arthritis, commanding the pain to go in the name of Jesus. The woman smiled and testified that the pain had disappeared.

A young Asian body-builder felt pain in his forearms when curling his biceps. After a brother ministered to him in the name of Jesus with the laying on of hands, he reported that one arm was healed 90%, and the other over 50%.

A woman had a lump at the side of her eye. The lump disappeared when a sister laid her hand on the lump, and rebuked it in the name of Jesus.

I man had pain in his wrist, but after a brother ministered to him in the name of Jesus, he was able to flex his wrist freely without pain. 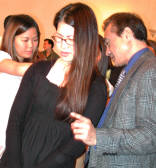 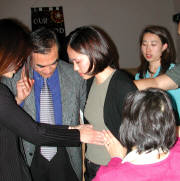 Two young woman each had scoliosis, an abnormal curvature of the spine. Because of this, they suffered from back pain, headache, and pain radiating elsewhere, including down to the leg. During ministry in the name of Jesus, their spines straightened. The friends of the first could no longer see or feel with their hands the abnormal curvature of the spine. The other woman discovered that her rib cage had moved into normal position as her spine was straightened in the name of Jesus.

An older woman named Tante Irene had cataracts in both eyes and a problem with her breathing. After a sister laid hands on her eyes, commanding the cataracts to go in the name of Jesus, she testified that she could see more clearly. As the sister laid hands on Tante Irene’s chest, she testified she could literally feel the Lord’s power opening up her lungs and healing her!