“Greetings to you in the sweet name of our Lord Jesus Christ.

In this top time in the state of Orissa, our powerful God was our protection. Even though we were a little worried, we knew that many anointed servants of God were interceding for us.

We started our journey from Bhawaniptna on Saturday, 10th January at 10 am in the morning towards Kandhamal and Gajapati districts—myself, my wife Rosy, little Naithan, and another brother.

After sixty kilometers we arrived in the Kandhamal district. We were surprised to see that there were so many schools, colleges and other institutions closed. They closed down after the persecution and till today there is nothing going on. Everywhere we saw the CRPF Police who secure the people. The children are roaming here and there without having any aims and objective. We did not find many people in the villages while we were traveling on the road it was all over only solitude.

Because of the CRPF police protection people are living in few villages.

We were a bit nervous seeing the solitary areas but thank God nothing happened on the way to Tundruma. God helped us to reach safely.

Around twenty-five kilometers up we ride the mountain to reach the village of Tundruma.

We were shocked to see the village on a mountain top. There were hundreds of houses on the mountain. Those tribes called Kui-Soura. They are uneducated; we could found there half naked people. I believe only the power of Gospel can transform the life of the Kui-Soura tribe. There are many villages in this tribe who live in this mountain area. 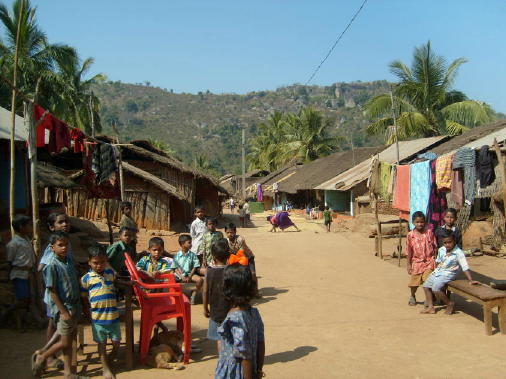 We came to know that they are facing many problems such as water and electricity. If they want to get water then they need to walk down one kilometer. If they want to purchase anything they need to go down kilometer after kilometer. After seeing all those things I asked them why you have to build a house here instead of building on a flat plain. They answered that we are tribal and our work is laboring and farming on the mountain. 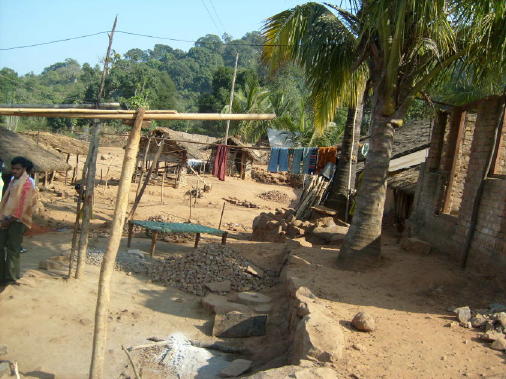 As I have informed you very few believers are there in Tundruma but we are so happy the way of their welcome and arrangements. I was thinking few people would be attending our program in a mountain village. But when I saw a big gathering I was just astonished. Before our arrival they had gathered.

Before my message Rosy led them in worship and we all enjoyed worshiping the living God. 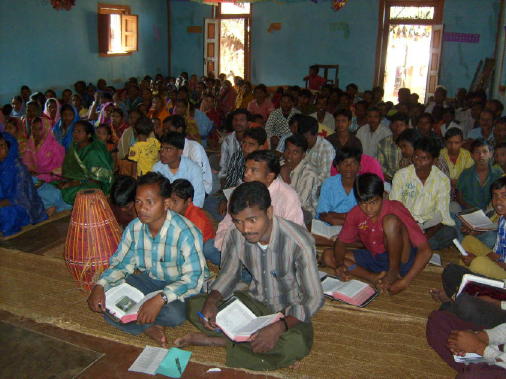 Thank God for enabling me to share from the word of God. I believe because of the prayers of the many servants of God I could speak forth and it was touching to many of them. The movement of the Holy Spirit was so powerful we all could experience His mighty presence. 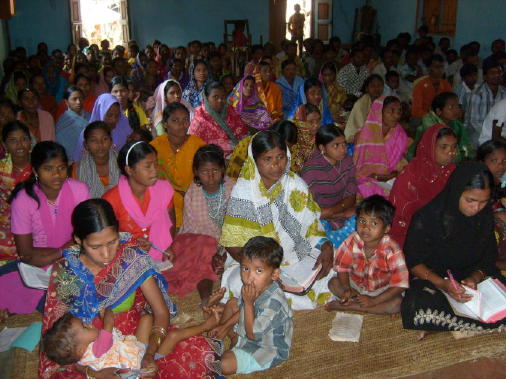 I saw so many people crying bitterly, confessing their sins and accepting the Lord Jesus Christ in their life. It was so wonderful to see the people’s heartfelt response with tears. May the Lord Jesus continue to pour out His Spirit in their life as they began a new life in Christ.

In Tundruma around three hundred and twenty people were gathered. The majority were non-believers. One hundred and seventy non-believers received the Lord Jesus Christ. The Lord did mighty healings and miracles there. 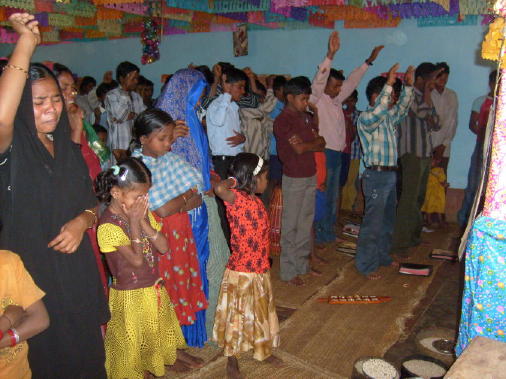 Above: Tribal people accepting Jesus Christ
Below: Ladies coming to the Lord Jesus in repentance 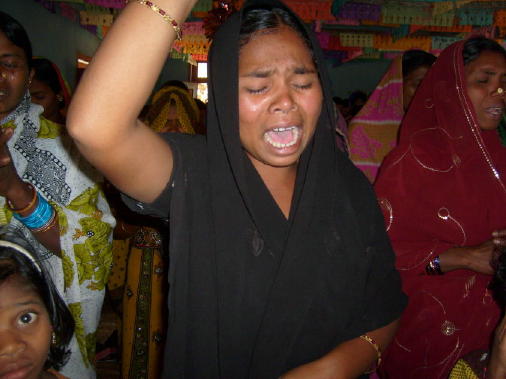 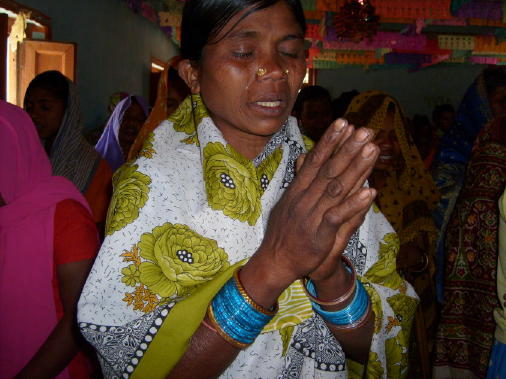 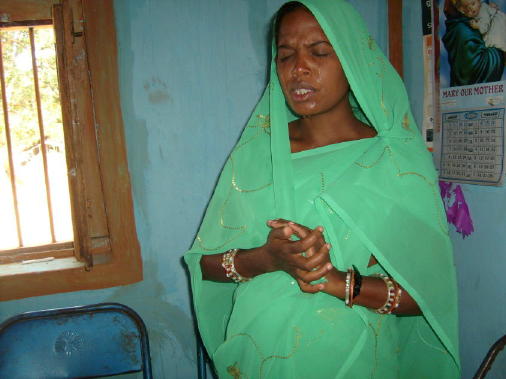 Miracles of healing for the tribal people

Praise God for the miraculous healings that took place with the believers and non-believers. 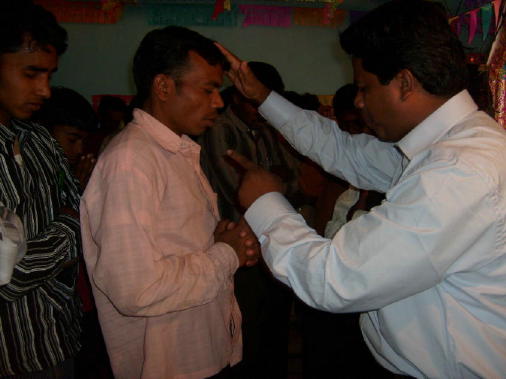 1–First of all, we ministered to a young man named Gamanga who was suffering from stomach pain for the past three years. When he was healed and witnessed to others, then hundred of people surrounded me to minister to them. The people were astonished how he was healed within a moment in the name of Jesus. 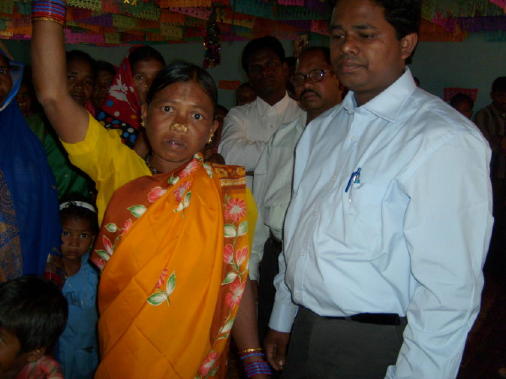 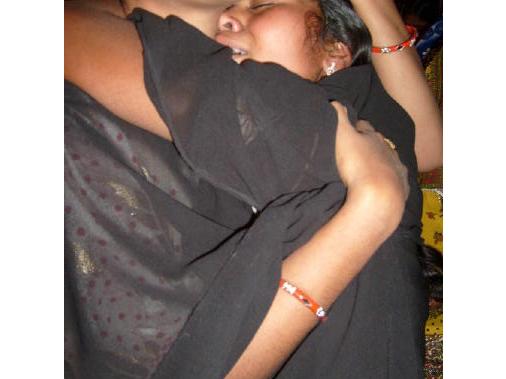 3–A young sister, Sarita, was suffering from sicklin (blood loss) and was very weak in her body. When I started to minister to her she started crying, she wanted to get healing touch and also the salvation from God. While I was ministering to her she was almost uncontrolled she was about to fall when she felt the Lord’s touch very powerfully. You can see in the photo she was crying and lying in Rosy’s arms. What a God we serve. 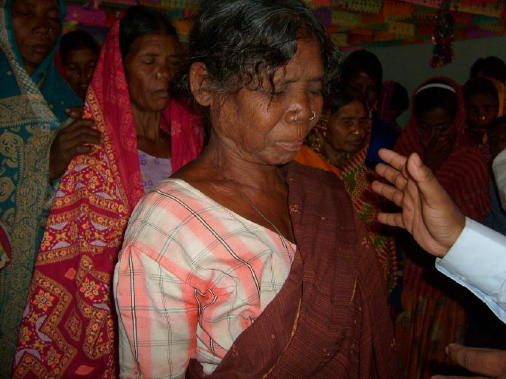 4–A woman was possessed by demon spirit for many years. The demon spirit was tormenting this lady. The power of God made her free from that terrible condition. 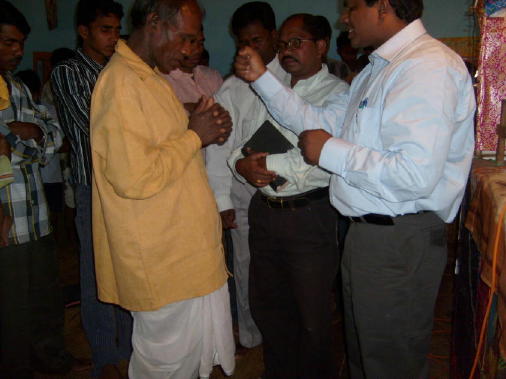 5–An old man was suffering from chest pain. He was unable to do work and his hand also was inactive. But the power of God healed him and he testified. 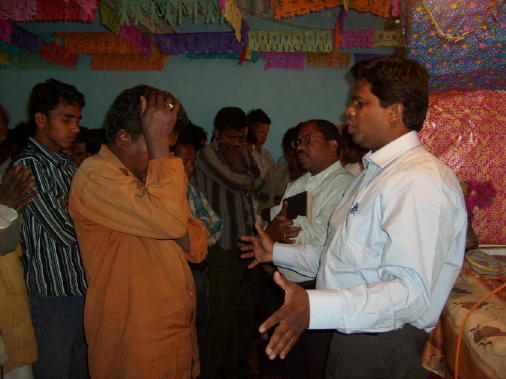 6—One of the brothers named Bikash had suffered much from a severe headache for long time. He was telling that it was a terrible pain that he was not able to control or bear. He was longing for a healing touch. He asked me to minister to him. When I did, he felt some changes in his head. Praise God that He touched him. 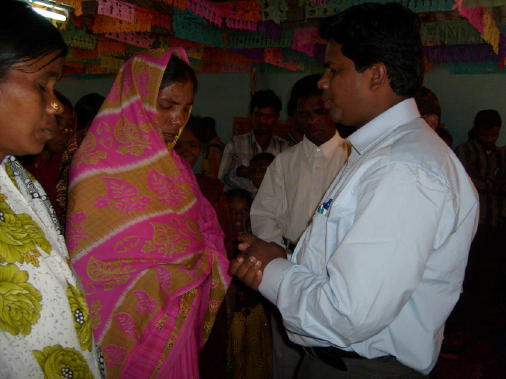 7–A sister named Banita was suffering from skin disease. For a few months all day and night her entire body was itching. When I ministered to her, she said she felt better than before. She believed that she was healed.

Many more came for this kind of skin disease to be healed and they asked me to minister to them. Even one of the grandfathers also came to get healing from skin disease. Here I request one thing that this village people are having this skin problem I think it is spreading out to every body. So many people came to ask me for ministry for the same condition. 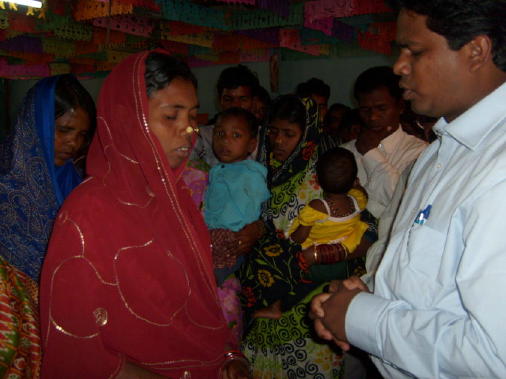 8–A sister named Rani had a stone in her stomach and she was suffering from severe pain for two years. That day it was an opportunity for her to get a healing touch from God. She was crying bitterly for that pain to leave from her body. Miraculously she was healed. In that moment her stone vanished. And God saw her tears and wiped it away through our ministry.

9–One mother, Surabhi, was not able to bend over. She had a back pain and even her hands and legs also were not working properly. After the laying on of hands she was able to do what she wants to be done. I praise God that He healed her completely. 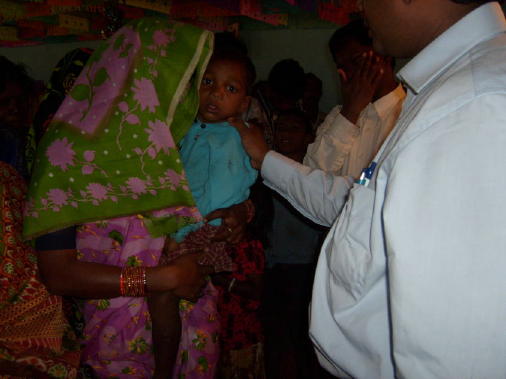 10–One baby boy was suffering from fever for few days. His mother brought him to me for ministry. When I commanded the fever to leave in Jesus’ name, the baby’s temperature cooled down.

She had a prayer request. Her problem is that after she has children they never live for long. Within a year they die. Now she has one baby boy but he also usually gets sick. So she earnestly wants of our prayer. Please pray for her and also for her family. 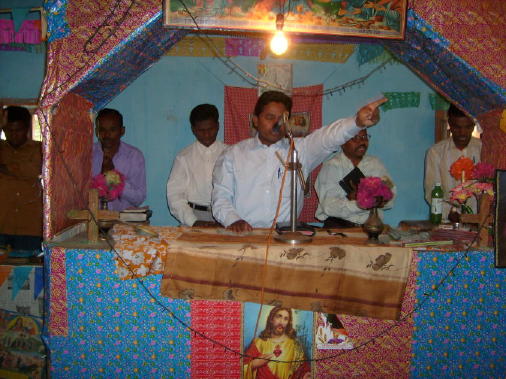 “I am very glad to inform you that the Kui-Soura mountain tribal people are so glad for our ministry. They are requesting and saying, “Pastor, please come to our area and minister to those people who do not know Christ. There are so many villages where people do not know anything about Jesus Christ.”

They were saying, “We have seen the power of God in healing our bodies and we believe surely people will come to Christ through this type of ministry. We are very much blessed and touched by the power of God.”

After the program there were so many newcomers who received the Lord Jesus Christ in that meeting. Those people came to attend the Sunday service in the next week too.”

“We have received a special request from the Kui-Soura tribe for two days of meetings on March 21st and 22nd. They want us to arrange a revival and healing meeting over there. They are eagerly wanting to bring their own tribal people to the Lord. During this time the gathering will be more and according to them over twenty-five hundred people can gather consisting of both tribal Hindus and Christians from ten villages. They hope and pray that through the healing and miracles many will come to Christ.

I am very grateful to God because in the district of Kandhamal, this same tribe of people are very rebellious toward the Christians and they are the ones who are the main persecutors. The entire problem started in Orissa by that group of people in Kandhamal but praise God a few miles up in the mountains this same group is receptive to the Gospel, it is unbelievable. It is just a miracle of God and nothing else.

With the current situation in Orissa this kind of response and gathering is a magnificent miracle of God and it is the answer to the prayers of thousand of the saints throughout the globe.