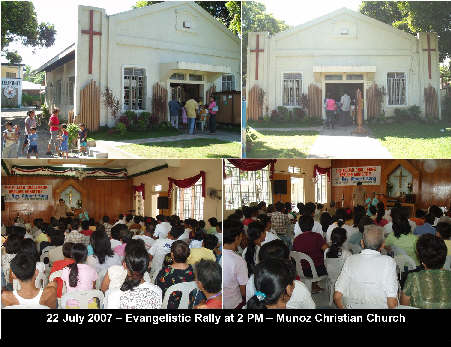 The blazing sun did not prevent the crowd from turning up for the Evangelistic Healing Rally at 2.00 PM. The sanctuary was filling up fast and ushers were putting in more chairs. In spite of countless fans blowing at full blast, everybody was perspiring profusely. My fresh barong Tagalog was also getting soaked with perspiration. However, the atmosphere in the church was that of anticipation and excitement. This first evangelistic rally was organized by ACLEAD, Muñoz Christian Church and ten or more churches in Muñoz. Muñoz Christian Church is Evangelical and does not advocate speaking in tongues. Joining in the rally were Baptist and Conservative Baptist churches. There were also Pentecostal and Charismatic churches. It was very exciting to see all these pastors from different denominations and beliefs mingling together in one location.

My opening scripture verses were taken from Matthew 24 about the signs of the end of the Age. I wanted the congregation to know that “this is not just the End-Time but the end of the End-Time. The spirit of Elijah is now being manifested so that many people may come to know the Lord in a personal way”. There were heads nodding in agreement among the crowd. Even though Pastor Joy and Dr. John assured me that there would be no need for interpretation into Tagalog; I suspected that half of the congregation did not know what I was talking about.

To build faith, I invited the elderly “Pastora” who was healed of a knee pain two days ago to testify in Tagalog what the Lord had done for her. Those who were healed previously were also asked to raise their hands. Trained believers who came from different churches were invited to the front to get ready for battle. The infirmed who filled three rows of seats in the front were asked to place their hands on the affected areas of their bodies. By this time, Pastor Joy had become familiar with the repertoire of commands in Tagalog. He and I took turns to command the diseases and pains to leave. 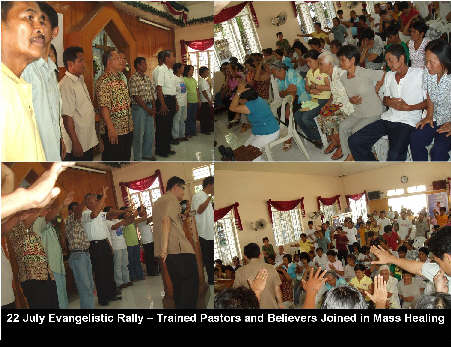 After two rounds of taking authority, seven people were healed. One of them was the same elderly lady pastor who received an additional healing on her painful left arm and shoulder joint. A lady with back pain testified that there was no more pain. Another lady with migraine headache was instantly healed. An asthma patient testified that her breathing difficulty had left her after the mass healing. Another middle-aged lady shared about various body pains having disappeared. A middle-aged man, who just had a stroke on his right side, came forth to testify that the head and arm pain had left him. 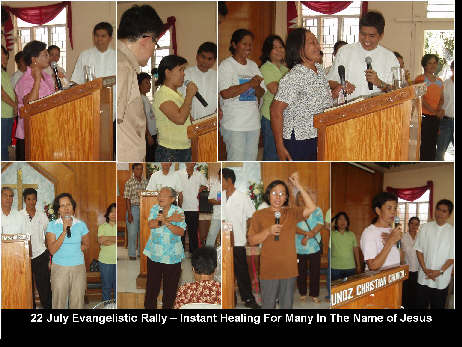 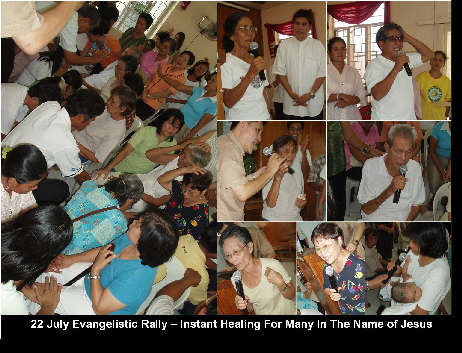 Pastor Joy then invited people to acknowledge Christ as the great Healer and to accept Him as their Savior. He asked those who desired to become disciples to pray along with him. The salvation prayer uttered in Tagalog could be heard loudly as everybody repeated after Pastor Joy.

Those who were healed in the mass healing vacated their seats at the front, so that others who needed healing may occupy them. These seats were quickly taken by patients who were suffering from all kinds of diseases… some were as serious as tuberculosis, cancers, high-blood pressure and strokes. The trained believers then descended upon the infirmed people and laid hands on them. They repeated with great fervor and faith as Pastor Joy and I gave the commands for these diseases to go in the name of Jesus.

Among the first to testify was an elderly lady who was healed of her arthritis pain. A very old man was healed of the pain in his legs and he gave thanks to Jesus. (I was later told that this man was the richest landowner in that region). A mother testified of being healed of pain in her body and wanted us to pray for her baby who had festering sores on the head. We did and she was thankful. A woman wept when she recalled how consistent pain in her abdomen had bothered her daily. She gave thanks to the Lord for healing her instantly. There were quite a number of patients who had their painful shoulders and arms healed.

It was very easy to verify healing among patients who suffered from tangible painful conditions. Those who were hobbling or limping because of pain in their legs or knees, made very good testimonies after they were healed. Everybody could see that they could walk normally again. Some of those healed even danced, jumped or squatted to prove that they were healed and all these created great impact on the unbelievers. 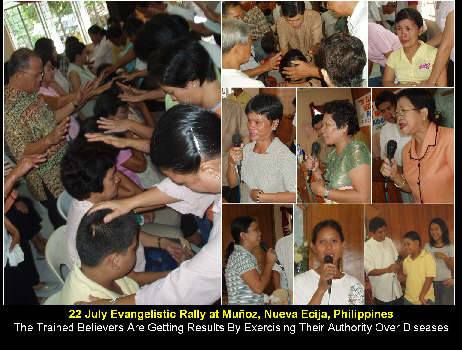 An interesting healing case belonged to a lady who came with a walking stick. After the healing of her hips and legs, to loud applause, she testified that she would throw away her walking stick. She simply had no need for it anymore. 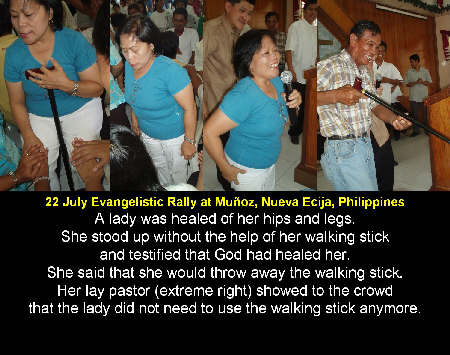 There was this lady who was sitting patiently holding up her painful fingers. Nothing happened to her in the mass healing. I noticed her looking up with pleading eyes – almost like begging to be healed. After two of the trained believers took authority, her pain was instantly gone. What a joy to see her testified to the glory of God.

An old lady hurt her head in an accident two years ago. However, during the rally, she did not get healed. Sister Grace found out that for over one year, this old lady had sought the help of witchdoctors and consumed their medicine. In her home, she still has many charms and idols. The lady pastor from her area promised to clear and burn all these charms and idols so as to break the bondage of their control over her life. Then the lady pastor and her lay pastor would take authority and heal her. We were pleased that local pastors are taking responsibilities and using their authority to heal the people in their areas.

Another lady had complication in her digestive system. According to her, the doctor discovered that her intestines had grown abnormally and they were causing difficulty in her bowel movement. During the time of healing, the trained believers could feel definite movement in her abdomen. The lady said something had moved inside her abdomen and she had felt a definite relief of pressure. She knew that she was healed. Tears of joy flowed down her cheeks as she gave praise to God.

There were quite a number of patients with high blood pressure, diabetes, cancers, tuberculosis, thyroid problems and goitres who claimed that they were healed. We asked them to go for medical check-up. They were told to bring the medical reports and show them to their pastors. We need to see actual evidences of healing before we can document them.

By this time, Sister Grace and I had lost count of the many healing testimonies because we were also busy healing the sick. We saw some trained believers struggling and showing signs of frustration. Some were obviously discouraged by their repeated fruitless efforts. That was when we joined our faith with theirs and got rid of many mountains.

A line of infirm people was forming in front of me as they waited for me to heal them. Somehow, they thought that I had more healing power than the other trained believers. A lady pastor from a Baptist church was helping me with the interpretation and also commanding along with me. When we laid hands on these infirmed people, most of the pains were gone within one or two commands. Whether they were back pain, head pain, hand pain, leg pain, shoulder pain, knee pain, etc, the “dunamis” of God was almost like flowing out of my hands as I felt heat in my palms. In my mind, I was hoping that this was the result of God endowing me with the gift of healing. This series of instant healing was just too good to be healing by authority.

My “gift of healing” idea came crashing down after I was given a gigantic mountain. Brother Ong, my father-in-law led me to a young man who was blind since he was one-year old. Under the watchful eyes of this man’s pastor and those around me, I failed to even cause a single ray of light to penetrate this man’s blind eyes. After every command, he would say, “bulag!” His pastor told me that the word “bulag” was Tagalog for “blind”. In desperation, I asked permission to put saliva on his eyelids and the blind man agreed. After the saliva treatment and lots of commanding, it was still “bulag”. I felt a deep disappointment in my spirit. It was as though I was chastised by the Lord for having so little faith. The early disciples must have felt the same way when being chastised by our Lord for not being able to heal the demon-possessed boy. I promised myself that I would fast and pray the next time so as to exercise more mountain-moving faith. Thankfully, there were so many other miracles that outweighed this one failure. The testimonies of countless healed people brought joy and encouragement to my heart.

The healing ministry went on until past five o’clock in the afternoon and by then we were all exhausted. It was a very hot, long and tedious day. The crowd had dispersed and so we headed for our hostel, reminiscing and rejoicing at what the Lord had done in Muñoz that day.