M
A bit shy of forty servants of God attended the Training held at Houston’s Union Baptist Association which has nearly 600 member churches in the Greater Houston area. The participants included parties from Illinois and Washington State. Many of the local believers were from Baptist churches in the Houston area. The Lord graciously anointed us to teach His word to His precious disciples. During the various healing demonstrations, the Lord was gracious to confirm the teaching by performing different miraculous healings.

One of the participants, Pastor Ma Linh from Vietnam, later wrote, “I just say THANK YOU OUR LORD, for his great power to heal my long-term back pain and shoulder pain. When I attended the Basic Training at UBA last Saturday, our friends laid their hands on my back and shoulders. Now, I’m completely well. Praise the Lord, Our God.”

A notable healing at the Training involved an elderly woman named Mary who was completely blind in one eye. After believers laid hands on her, she was able to see from that eye and count fingers! Just before that, several people, including Mary, had come forward for healing from various hearing problems. All except for one (who needed more time and opportunity to test his hearing) immediately reported a positive change in their condition. Some appeared surprised that afterwards they could hear well or noticeably better than before. 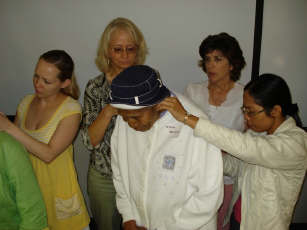 At the Training: Mary’s hearing is restored 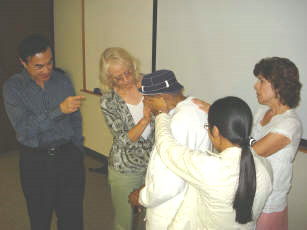 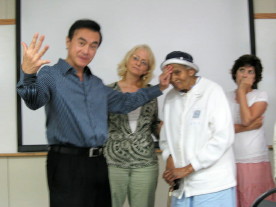 Her blind eye is opened and she can count fingers! 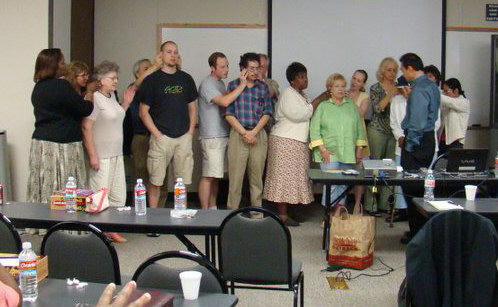 Training the saints to minister to hearing problems in Jesus’ name

Where are the three brain tumors?

There was also a brother named Daniel who was brought to the Training in a wheelchair suffering from advanced cancer in various parts of his body including his brain, as well as severe sugar diabetes. He was under the care of excellent doctors at M. D. Anderson and receiving treatment from them. The believers laid hands on him. Afterwards he said he felt a tremendous wave of heat sweep over his whole body as they ministered to him. A few days later we received the following message from his twin sister Donna:

“As I write, I’m at my twin brother Daniel’s home in Sugarland. He sends his blessings to you and is praising God for the miracles (plural) he personally experienced at your Training this weekend. On Saturday, not only were the five of us able to bring Dan’s blood sugar down 14 points at your Training, but it has been within more normal ranges since then! Another miracle? I say, yes Lord thank you!! Thank you for your anointing power and giving us the same authority that Your disciples had! We are children of the Most High God, the descendants of Isaac, Abraham, and Moses and we have been taught to carry the same authority over sickness, disease, and cast out demons through using the power of the Holy Spirit, which comes from our Father and Christ Jesus.

Daniel went to have another brain, lung and kidney scan this week and the doctors are puzzled. MD Anderson believes the machines might have malfunctioned because they could not find any of the three brain tumors that Dan had only a few months ago! We are waiting for them to put this in writing. The doctors at MD Anderson have said the tests appear to be inconclusive. Well, we are saying PRAISE GOD FOR HIS MIGHTY POWER!!! Do I hear an AMEN! Another interesting note which I am puzzled over, though: as I was leaving a message/praying over the phone for my brother while he was waiting to get his brain scan done at MD Anderson, the paperwork in the MRI room flew off of the table about three feet, whirled around in the air and then jammed itself into a small crack in the machine and got it stuck. The prayer I was leaving for Dan on his cell phone was one rebuking the disease of cancer, telling him he was healed in the name of Jesus, that the spirits of disease & sickness have no claim to his body and they are commanded to detach, leave him, and are cast into the pit of hell, in Jesus’ name.

My brother laughed and said the little technician in there just kept saying “I’ve never seen anything like this before! What’s going on here?” Then he proceeded to unjam the paper from this multi-million dollar MRI machine. God shows me more everyday that His word has more healing power than anything known to man!”

The doctors later confirmed that the three tumors in Daniel’s brain that showed up in previous tests had mysteriously disappeared. Moreover, the tumors in his kidneys and liver—where we had laid our hands as well—were no longer there. His blood sugar was normal as well as his chemistry panels. But Daniel nevertheless eventually died because according to his doctors the cancer had spread to other parts of his body. The doctors gave up hope and received permission from the family to withhold food. After ten days, Daniel passed away from malnourishment.

See the photos below.

The brothers laying hands on Daniel 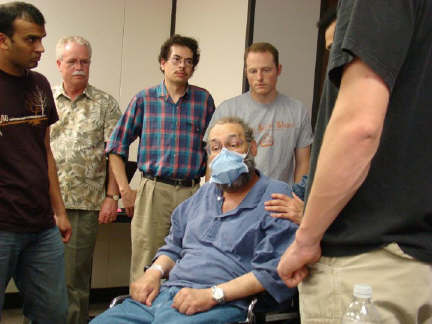 Each time hands were laid on him, his blood sugar dropped by over ten points and eventually out of the dangerously high levels where it had been before

The Climax: the open-air outreach for the homeless

Then on Sunday we held the climax of the Training—the outdoor evangelistic healing outreach for the homeless with the Church Under the Bridge in downtown Houston. 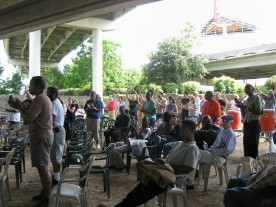 Above & below: The Church Under the Bridge 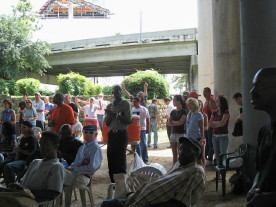 We preached the gospel from Mark 2, as we often do on such occasions, arguing that Christ’s authority to heal infirmities demonstrated his authority to forgive sin as only God Himself can do. Then we told them that we would pray to the Lord and ask Him to heal those present with infirmities and addictions to prove that He could forgive our sin then and there, thus saving us from condemnation in hell. Two thousand years ago He died on the cross for that very purpose.

Like a disciplined army, the trained servants of God marched forward boldly and laid hands on the infirm as they had been equipped to do in the Training. 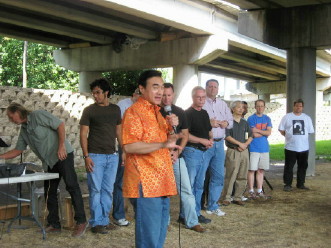 Above & below: believers assembled at the front ready to destroy the work of the enemy 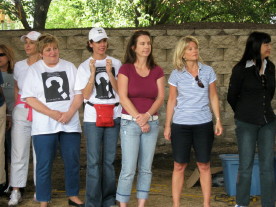 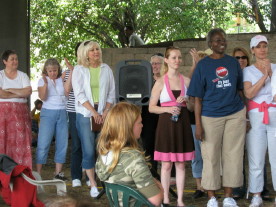 Below: the saints engage the enemy, lay hands on the sick in Jesus’ name 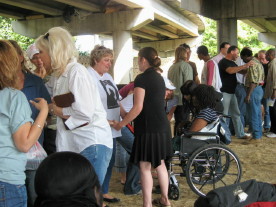 Within a few moments, several people were healed of their infirmities and came forward to give public testimony. A few of the testimonies were:

A man who had pain from hepatitis B felt a surge of power throughout his body and the pain disappeared. He also felt he was delivered from homosexuality. See the two photos below. 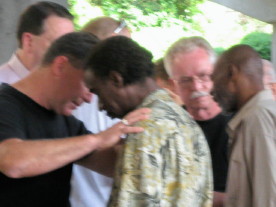 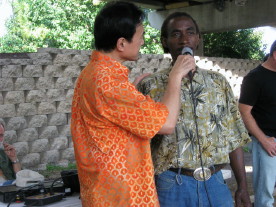 A man with glaucoma felt the pain and pressure in his eyes disappear and his vision brightened. Hands are being laid on him and then he testifies in the photos below. 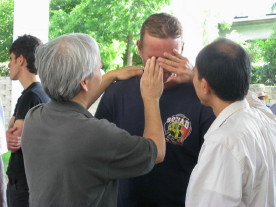 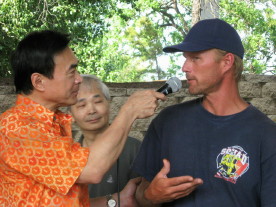 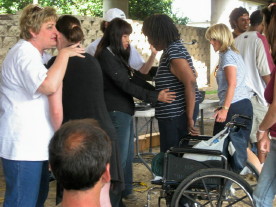 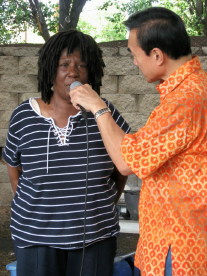 Below: some of the other testimonies of healing 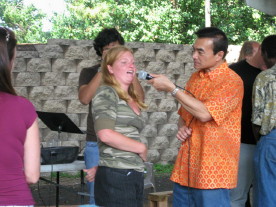 Young woman was delivered from various pains in her body 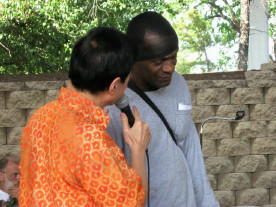 Above: man was healed from pain due to injuries
suffered in motorcycle accident 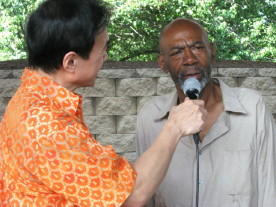 Based on the testimonies, we challenged the homeless people to repent of their sin and follow Jesus Christ as Lord and Savior. A total of fourteen of them came forward in response. 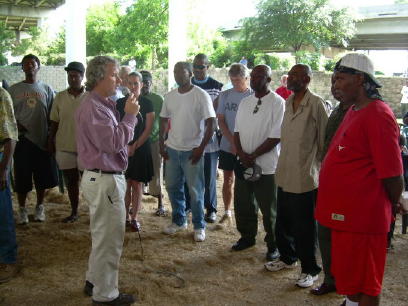 At the end we encouraged the servants of God to hold such events entirely on their own without us. That was the whole point of The Elijah Challenge Training.

May the Lord grant us favor and open the door for us to do more such Training events in the Houston area, especially with evangelical and Baptist churches.

What the disciples did with the Training afterwards

“This is Jonathan Speckman (from Chicago) checking in. I just put to practice the authority which we learned about over the weekend. A new guy at my work just started two days ago. The job involves lifting and grabbing a lot and his hand started hurting him badly. In between his knuckles were pain and aching.

My faith shot thru the roof and I said OK, fine.

I placed my hand on his knuckles and commanded the pain to leave in the name of Jesus, and for the arthritis to leave and for him to be healed.

As soon as I took my hand off of his, the pain left instantly!!! Praise God!

He kept on saying… “Oh my God! The pain is all gone…I can’t believe it…I swear to God the pain is gone…How did you do that?…This is amazing…etc.”

Ha ha! So then I told him a little bit about Jesus Christ and how he gives his believers authority over diseases etc. to do the works of Christ—to show that he has the power to forgive sins and give eternal life.

Then work got busy again and we had to head back to work, so I invited him to come out to my house this weekend with his wife so that we could share with them more about Jesus and give them the opportunity to follow Jesus.”

“I am so blessed and happy we were given the opportunity to come to The Elijah Challenge. We are currently being given the grace to put into work what we learned. I received a call from my sister yesterday that she is hemorrhaging from her brain and that she might need brain surgery. Jonathan and I are going to go pray over her this Saturday and see if she will give her life to the Lord. We know this is a big mountain to move, so I ask that the members of your ministry pray along with us. We are deep in prayer for the boldness to do this and we pray that God will anoint us and work through us to perform this healing and hopefully bring my sister to know the Kingdom of God.”

“I have an update for everyone who might be wondering. My sister came up today for us to pray and command healing over her brain hemorrhaging. She was having pins and needles tingling in her leg for 2 months straight due to this. Jon and I and also Jon’s dad commanded healing over her and instantly she no longer had any tingling in her leg!! She is in awe of this miracle and cannot wait to get back and schedule her MRI to see how her brain is! And because of all this, she gave her life to the Lord tonight! The greatest blessing of all!!! We couldn’t be more blessed!

Thank you to everyone who was in prayer with us and using your authority at a distance to help us move this big mountain. Thank you to the Lord for giving us the strength, boldness, and faith to perform this miracle through Jesus Christ for his kingdom.”