Jerry Salmeron, Pastor of Iglesia Casa De Oración (House of Prayer), was the host of this Training event. He had attended the Training in February 2008, and although he was a charismatic pastor, found himself learning so much which was new and scriptural about healing. After the Training he returned to McAllen and held the Basic Training on his own. He also went across the border into Mexico where he held an evangelistic healing outreach in a neglected village. The Lord moved mightily through the team to heal the sick as the gospel was preached. Jerry’s report can be read here.

“Let me begin by saying that the whole training was overwhelmingly impactful. The majority of the Pastors, leaders and Christians that were in the training; this was their first time that they had ever participated in The Elijah Challenge. Most of the people that attended were not only challenged but in my opinion were changed to be able to heal the sick according to Luke 10:9 and the way the disciples did in the New Testament in order to be able to win the lost to Christ.

Brother William’s teaching was so transformational and inspiring! We were so changed that we have already set a date to have him back to do the Basic II again. At Iglesia Casa de Oración we are already going out in teams every 3 weeks into different neighborhoods to do The Elijah Challenge.

There were many that were healed from different infirmities such as: blindness in one eye restored, back pains healed, knees, hearing restored, necks, vertigo, partial blindness caused by diabetes improved, humming noise in the ear healed. There were about 20 to 30 healings that took place during the training and in the outreach, and Sunday morning healing service.”

The disciples who came were mostly Spanish-speaking and will be very effective across the border in Mexico in proclaiming the kingdom of God and healing the sick, especially in the villages. They were unusually receptive to the teaching and to the challenge set before them to do the works that Jesus did and to fulfill the Great Commission.

The Lord graciously confirmed the teaching through various miraculous healings, some of them quite impressive. On the first evening, a middle-aged man was set free from back pain he had suffered since he was a boy. A woman could no longer find a ball-like object in her stomach after sisters laid hands on her. On the second day, a younger woman was suffering from pain due to a cyst in her left breast. After sisters laid hands on her, the pain disappeared and she could no longer find or feel the cyst. Another woman who had poor eyesight came forward. After the brethren laid hands on her eyes twice, she testified through a big smile that she was able to see clearly.

Then the open-air evangelistic outreach 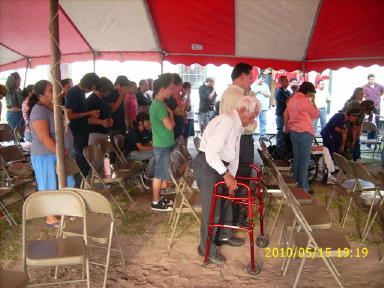 Following the Training we held an outdoor evangelistic outreach in the parking lot of a local church. There the Lord used his disciples very powerfully. After I preached the gospel, we asked the Lord to confirm the Word by healing the many infirm people who had come—most of whom were not members of that church. First we ministered healing-at-a-distance (following the example of Jesus in Luke 7) during which several people were healed—perhaps a dozen. They all came forward to testify of what the Lord had done for them. Some testimonies were quite powerful. One woman who was completely blind in one eye could count fingers at a distance through that eye. Another woman, weeping from gratitude to the Lord, testified of having her eyesight restored. During the testimonies I challenged the people to repent and to obey Jesus Christ. Many raised their hands.

We believe we were able to open a small window so that the people would be able to see the greatness of our Lord Jesus Christ. 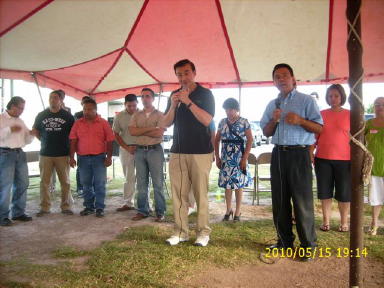 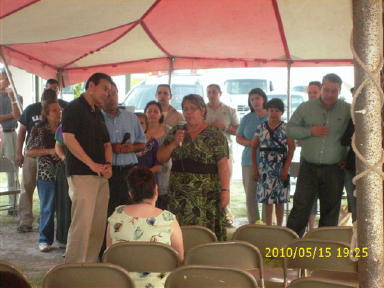 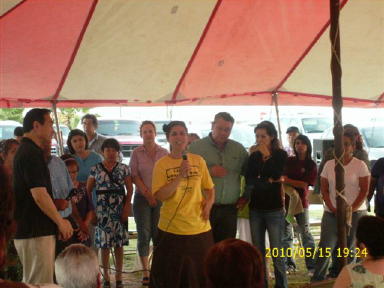 Pastor Maricela Hernandez who hosted the outreach came forward to give testimony of the healing of a sharp pain in her back. She had this pain for days and the pain left her completely during the healing-at-a-distance. 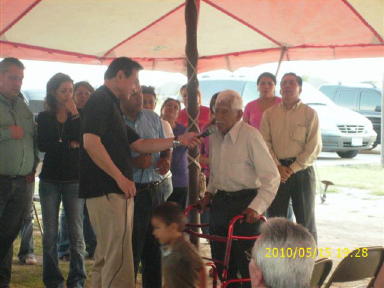 Above & below: This elderly man came forward to give testimony of healing. He could not walk without the assistance of the walker. After a second time of commanding the sickness to leave he was able to walk on his without the walker. The disciples who ministered to him did not even ask him to let go of the walker. Before they realized it, he was walking by himself away from the tent. They had to tell him to come back because they thought he was walking too far away! 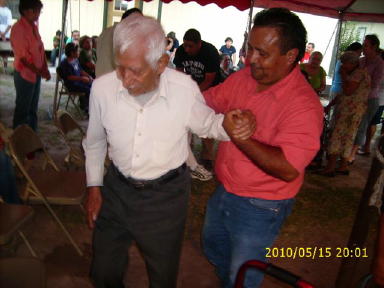 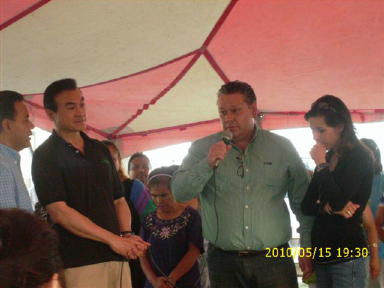 This man on the photo is Dr. Jesus Lopez and his wife Claudia. Brother Lopez was healed from a severe case of reflux. During the message he was seen with his head resting in the chair in front of him due to the extreme pain that he had. He was completely healed. His wife Claudia had been run over by a car a few months earlier and broken her neck, spine, knees, punctured her lungs and suffered several other injuries. When she came to the Training, she still had some pain in her body. She testified that the pain especially in her knee was completely gone! 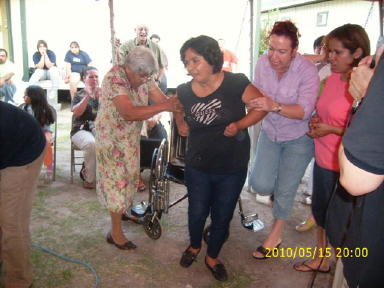 This woman who has cerebral palsy had complete blindness in her left eye. After the healing-at-a-distance, Pastor Maricela approached us with great excitement to tell us that the woman could now see from that eye. We tested the eye and she could count fingers correctly. Praise the Lord! 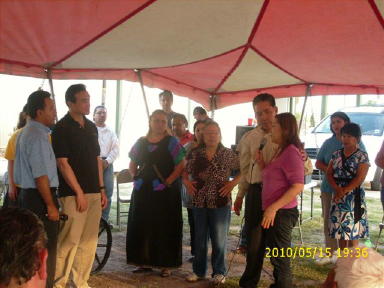 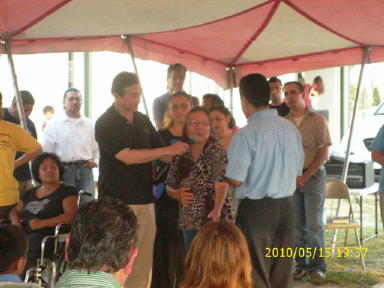 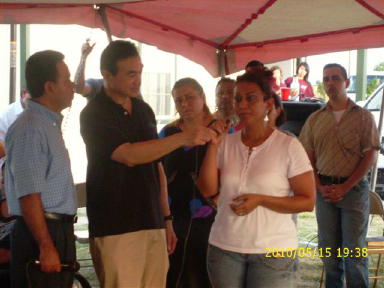 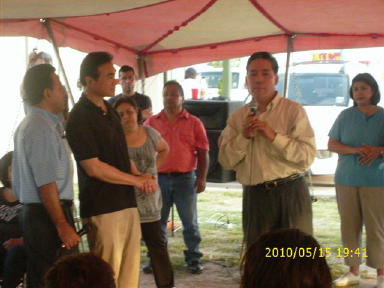 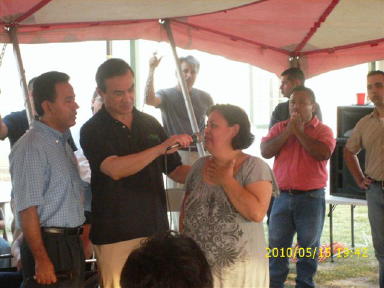 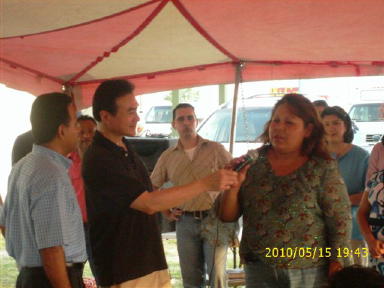 After the testimonies I had the trained disciples minister healing through the laying on of hands to those who had not yet been healed. More were healed in this way and gave their testimonies. Through tears, one woman testified of being healed from paralysis.

The disciples were transformed through the Training. They became bold and confident when ministering healing. Some of them will be crossing the border into Mexico to proclaim the kingdom of God, and they will do mighty exploits. A sister named Nora will apply what she has learned to heal the sick and preach the gospel when she visits her family across the border.

A medical doctor—a pediatrician from a wealthy and influential Catholic family in Mexico who accepted Christ two years ago—came for some of the meetings and was deeply touched by the Lord. He received a powerful prophecy on Friday night while helping out at another meeting in town—that God would send him to many nations in the power of miraculous healing and signs. He wanted to take the radical action of giving up his practice to serve the Lord full-time, and called me his teacher.

On Sunday morning at Iglesia Casa De Oración I preached a hard message about repentance in light of the coming dreadful and terrible Day of the Lord. It’s a message that contrasts starkly with the usual diet fed to God’s people today which emphasizes God’s unconditional love, grace, comfort, and blessing in this life. At the end of the service the Lord confirmed the message by appearing to heal everyone who had come forward as the trained disciples ministered to them. Three families at the service who were visiting the church for the first time are now interested in meeting with Pastor Jerry this week. They were blessed by the service and may want to join the church.

A couple serving in Iglesia Casa De Oración had a young pet dog named Rusty who was very sick. According to their veterinarian, Rusty was dying of a congenital heart condition and there was no hope for him. Even the pediatrician (above) after seeing the dog said that a human infant in such a condition would need radical medical intervention in order to survive. Tony and Carol decided to apply what they had just learned in the Training and laid their hands on Rusty’s heart, commanding his heart to be healed. Rusty has now risen from his sickbed and is now running around the house enjoying life. Now he needs to regain all the weight he lost during his sickness. God is good. 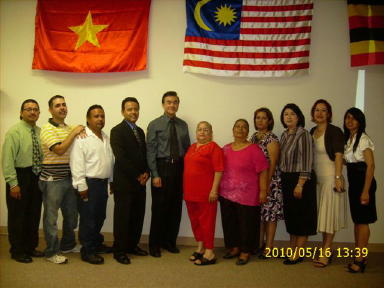