W & L returned to West Borneo where they began their ministry in 1978 as church-planting missionaries to unreached areas. In Pontianak they met with their spiritual children, people whom they had brought to the Lord decades earlier. Many of them were serving the Lord as pastors, leaders, and businessmen. The account of their “adventures by the spirit of Elijah” in West Borneo can be viewed here.

The pastors and servants of the Lord here received the End Time Model of Evangelism with gusto. Some comments that we heard: “the teaching is pure and directly from Scripture; cannot be refuted…it is not man’s opinion and interpretation piled on top of a verse of Scripture.”

The teaching was put into practice in two Evangelistic Healing Crusades. In the first, the meeting hall was packed with several hundred people. Before and after the preaching of the gospel, the trained pastors and servants of God ministered to the infirm in the powerful name of Jesus. Some miracles of healing were reported. Among them: one woman testified that a growth that had persisted on her breast for about a year could no longer be found. A man whose arm and hand were paralyzed for six years because of a stroke was able to lift his arm up freely. A handful of souls responded to the invitation to accept Christ as Lord and Savior after they heard the gospel and saw the confirming miracles. The Father glorified the name of His son, our Lord Jesus Christ. 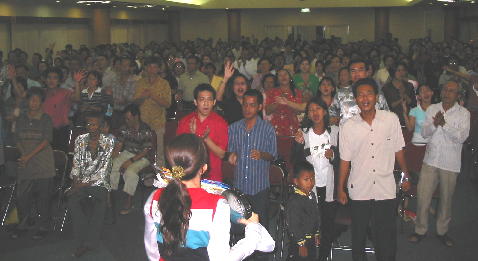 In the very glorious second meeting the Lord gave us supernatural words of knowledge for healing on which the trained servants of God acted, resulting in several miraculous healings and testimonies. One woman who had come to the first Crusade meeting was practically blind and able to see only shadows. During the second evening after trained ladies ministered to her, she could see details. A man who suffered partial paralysis on his left side from a stroke came up to the platform to testify that he was healed as the men laid hands on him. There were several other testimonies of healings as well and the name of Jesus was exalted.

When Lucille gave the altar call to receive Jesus Christ, souls came forward and up to the platform, something not easy for Asians to do. His power to set people free from the prison of infirmity clearly proved to the people that he has authority to forgive sins and save from punishment in hell. The saints greatly rejoiced at the manifest goodness of God their Savior. When Lucille challenged the believers to commit to holiness and obedience and to serve the Lord, about one half of the people present stood to their feet. At the end Pastor Yapi, who was one of our primary hosts and married to our spiritual daughter A Moi, prayed the closing prayer. As he prayed, he said that the city of Pontianak will be won for the Lord.

Putussibau is a very remote area in the interior of West Borneo near the end of the province-wide Kapuas River. 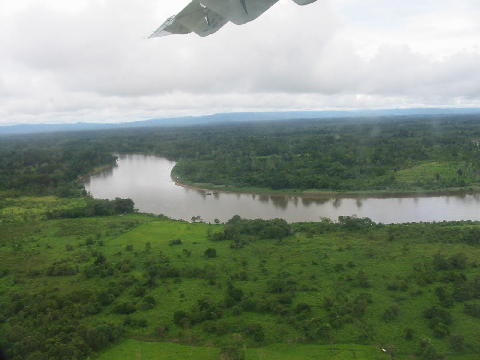 Flying over the mighty Kapuas River to Putussibau 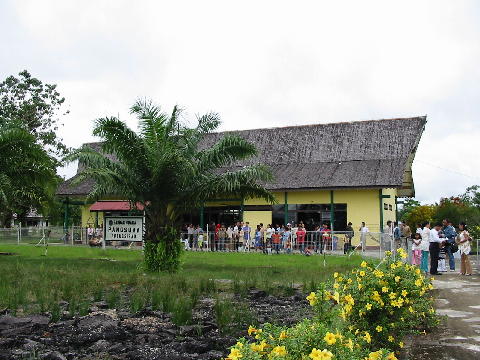 The sole terminal building at the Putussibau airport

In this area rife with belief in witchdoctors, even among Catholics, the God of Elijah sent fire.

At the standing-room-only Evangelistic Healing Crusade, I shared the gospel of Jesus Christ from Mark 2. In that Chapter Jesus proved that he had authority like God to forgive sin by healing the paralytic man. Likewise that evening we asked Him to heal the infirm to prove to the people that He had authority to forgive their sin and save them from punishment in hell through His atoning death on the cross. 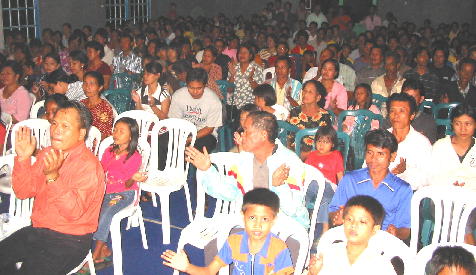 Before healing the sick as Jesus commanded his disciples in Luke 10:9 (“Heal the sick and tell them ‘the kingdom of God is near you.’”), we issued the Elijah Challenge. I challenged any witchdoctors present to use their powers to heal the sick first. There were no takers. So the local servants of the Most High went ahead and healed the sick in the name of Jesus Christ. Many were healed of their infirmities and came up to the platform to testify, including two women who had been unable to hear. Several others were healed of long-standing infirmities suffered in their legs and lower back. The wife of a very influential Musl__m in the community was healed and she accepted Jesus Christ. Afterwards many repented of their trust in witchcraft and received the forgiveness of their sins and eternal life through faith in Jesus. The victory over the local powers of darkness was great. The Church of Jesus Christ here has been greatly encouraged and refreshed.

The Church here is pastored by A Lan and her husband. A Lan was not even a teenager when William & Lucille arrived in her unreached village in 1980 to preach the gospel of Jesus Christ.