Mindanao is home for animistic tribal groups in the mountains as well as a sizable Musl__m population which has given rise to a Filipino terrorist group named Abu Sayyaf. 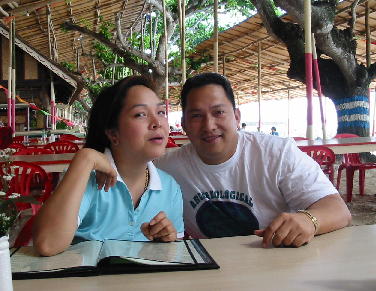 Our hosts Pastor Bobby & Dottie Abrina of the Davao Christian Broadcasting Channel (TV) tested the water by inviting The Elijah Challenge to the Philippines. This was the first time that they had hosted an event which actually equipped the body of Christ to demonstrate God’s healing power as Jesus himself did. Previously they had hosted preachers and evangelists.

The equipping sessions were videotaped for TV broadcast to a potential viewing audience of five million in Mindanao. The event became an opportunity to have significant impact on the regional body of Christ by equipping her to fulfill the Great Commission.

The Lord confirmed the teaching to the assembled servants of God and believers by healing a number of people of their infirmities at the end of each session through the participants. They were not simply given theory; they were taught exactly how to heal the sick as Jesus himself did in Scripture.

The first Evangelistic Healing Service took place on evening of the second day. After the gospel of Jesus Christ was proclaimed, the trained believers lined up at the front for war—healing the sick in the name of Jesus to prove that He has authority to forgive sin.

Several people were subsequently healed and came forward to testify publicly of what the Lord had done. Some of the sisters wept as they testified how they had been freed from years of pain and debility. Two Filipinos from the Musl__m religion were healed and testified from the stage. Based on the miracles the Lord had done in their midst, we urged the people to follow Jesus Christ (or Isa Almasih in Arabic) the Savior who had power to forgive sin and save from condemnation in hell.

The believers were encouraged to see what the Lord had done through them. At the end Host Sister Dottie Abrina got up and shared with the people that it is actually not difficult to bring souls to Jesus Christ in view of the authority He has given to us people. After the morning training session and the evening healing service were broadcast on TV, Pastor Bobby Abrina received many positive messages from viewers in response.

The third and final training session was especially spectacular. During this session we taught “mass healing,” where people with infirmities do not come forward for the laying on of hands. Instead they remain in their seats while trained believers exercise the authority given by the Lord and minister healing from a distance from the front. This is based on:

Luke 7:2 There a centurion’s servant, whom his master valued highly, was sick and about to die. 3 The centurion heard of Jesus and sent some elders of the Jews to him, asking him to come and heal his servant… 6 So Jesus went with them. He was not far from the house when the centurion sent friends to say to him: “Lord, don’t trouble yourself, for I do not deserve to have you come under my roof. 7 That is why I did not even consider myself worthy to come to you. But say the word, and my servant will be healed. 8 For I myself am a man under authority, with soldiers under me. I tell this one, ‘Go,’ and he goes; and that one, ‘Come,’ and he comes. I say to my servant, ‘Do this,’ and he does it.”

After teaching mass healing, we demonstrated it for the people. Outwardly there is a measure of risk when ministering mass healing. There can be times when afterwards few come up to testify that they are healed. This can be because those who are healed are too shy to come forward, or simply because few have actually been healed or know that they are healed. On the other hand, sometimes quite a few are healed and come forward to testify. It’s not “predictable.”

It’s one thing to do this before a gathering of believers who are being trained. It’s another thing to do this in front of TV cameras taping the meeting for broadcast into multitudes of homes. Humanly speaking it would be quite embarrassing if “nothing happens.”

We ministered mass healing from the front along with the trained believers. Afterwards when we asked those who had been healed to raise their hands, the camera spun around to cover the people. Slowly they began to raise their hands—one here, another there, and still another and then another. See the photo below. 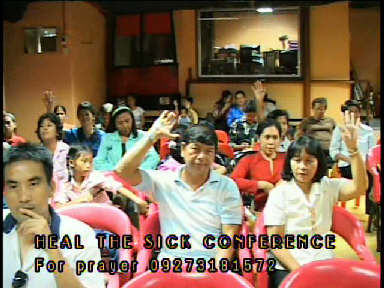 I asked them to stand up and come up to the stage to testify. A stream of people came down the aisle and nearly filled the stage. It was unprecedented considering the number of people present at the session. Their testimonies of what the Lord had done for them elicited joyful applause from the people. God had glorified His servant Jesus Christ through his disciples who had exercised their authority. The miracles proved that Jesus is the only Savior and the only way to the Father’s house. 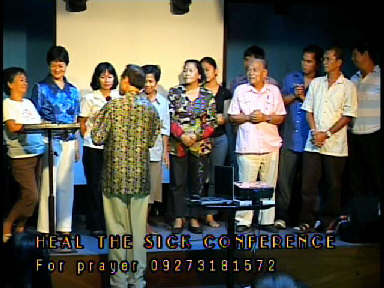 Above: the stage filling up with people whom the Lord had healed during the televised mass healing

Below: some of the testimonies from those who had been healed 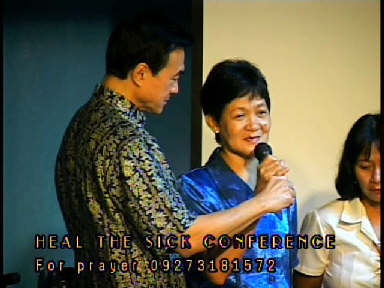 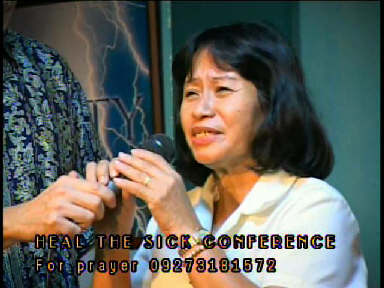 More importantly, what happened that morning was seen by many on TV. They witnessed the authority given by God to His servants to prove that the gospel is the absolute truth. The broadcast encouraged the body of believers in the region as well as brought the lost into the Kingdom of God. They were convicted of sin, righteousness and judgment. They were given grace unto repentance.

The Lord’s grace was also evident in a similar way at the Evangelistic Healing Service later in the evening. The gospel was preached and the sick were healed. The name of Jesus Christ was exalted.

Only July 8 the following month we received a testimony from Founding Director Keith Roussel of World View Ministries who attended the training. Keith wrote:

“This is Keith Roussel whom you met at the conference at the Davao Christian Broadcasting Channel in Davao. I just wanted to write to you and say “hi.” I have been blessed by your teaching. The day after you completed the seminar I traveled to another city here in Mindanao to be guest speaker in a church for their Father’s Day service. I spoke about the heart of the Father towards mankind and told them that it is God’s heart to heal them. So I did as you taught during the seminar. About 15 people responded to the alter call. I had the people place their hands on their body and repeat after me rebuking the sickness. I then asked the people if any of them were healed. Several people responded. A woman was immediately healed of tonsillitis, a man was healed of chest pains and difficulty of breath, the pastor’s son was healed of a potassium deficiency, and there were several people whose body pains left them.

I am excited at what God can do through me. I used to be a bit intimidated when I ministered to the sick because I really did not expect them to get healed, though I fully believed that God does and will heal. Now whenever I see someone with a cane, sickness or deformity I immediately think of it as an opportunity for God to display His power.

I will be going to Burma in August and I plan to impart into the Burmese believers what you have taught me about healing. I want them to be able to effectively reach their nation long after I am gone, and this teaching will certainly further equip them.” 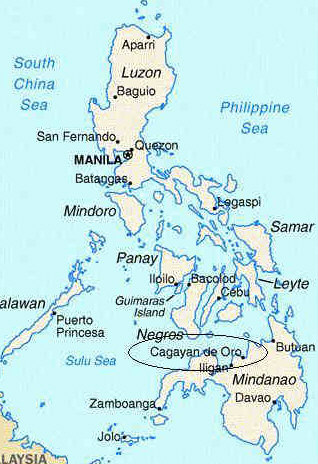 Cagayan de Oro is a seven-hour drive northwest from Davao on the island of Mindanao. As in Davao, the believers were first equipped in The Elijah Challenge Seminar. Present at the meeting were Carl Henderson, his son Nathaniel, and a Filipino intern named Mark. Carl and his family had attended The Elijah Challenge twice in late 2006, and then in January 2007 they left for the Philippines as long-term missionaries.

An Evangelistic Healing Service was held on the evening of the second day. It rained heavily on the aluminum roofing of the church during the meeting making it difficult for the people to hear the preaching of the gospel. The gospel was proclaimed over the deafening clattering on the roof above. After the preaching the trained disciples came to the front to demonstrate through miraculous healings in the name of Jesus Christ that He indeed had authority to forgive sin. Over twenty people testified of being healed, and afterwards twenty-one people came to the front to put their faith in Jesus as Redeemer or to rededicate themselves to him. It was a satisfying victory for the saints.

On the second evening, John 14:6 was proclaimed with great boldness by the Spirit of God. Then the trained servants of God came forward to demonstrate via miraculous healings that Jesus Christ is the only way to the Father; and that if one has seen him, one has seen the Father. During the first stage of “corporate mass healing,” about ten people came forward to testify movingly that the Lord had healed them of various physical infirmities. As a result, six souls came up to accept Jesus Christ as Redeemer.

Then during the subsequent stage of the individual laying on of hands by the believers, greater miracles took place. A young boy had been brought by his father to the meeting from out of town. Some foreign object had very painfully lodged in his eye and he could no longer open it. The eye had swollen. The doctors placed a cone-shaped patch over the eye to cover it hoping that it would stabilize. Then they could perform an operation to remove the object.

Carl Henderson, the American missionary from Texas who was attending The Elijah Challenge for the third time, was again present at the meeting. He led a team of Filipino brothers in laying hands on the boy, ministering to him for several minutes. The boy was fast asleep all this time. Then they removed the patch from his eye, and woke the boy up. He opened both eyes and looked around here and there with no sign of difficulty at all. After several seconds the swelling also disappeared from the affected eye. The father went up to the stage to testify to a delighted crowd.

When a call was given for people to repent of their sins and believe on Jesus Christ as Lord and Savior based on what they had heard and seen, a handful of precious souls came forward.

After the meeting, Carl ministered to two young deaf women. One of them was also mute. He pressed in with great authority, mountain-moving faith, and tenacity, refusing to take “no” for answer. After the dust settled, both women could hear. The one who had been mute was able to repeat the words that Carl spoke to her in English better than the one who could already speak to some extent.

The name of Jesus was greatly exalted. The servants of God are now equipped and encouraged to continue on their own to heal the sick and proclaim that the kingdom of God is near.