Restoration of Authority & Power to the Church in Bali 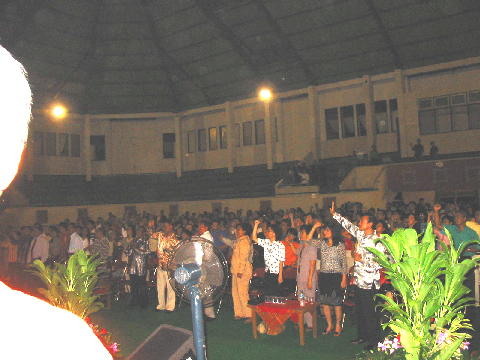 The Hindus in Bali are in some ways ripe for the gospel. Although individuals can suffer terrible exclusion from their Hindu family and community when they turn to Christ, Hindus are receptive to the gospel when it is presented with tangible power. Thus we are looking ultimately not simply for individual Hindus to turn to Christ, but entire communities to enter the Kingdom of God. In this way the persecution against converting individuals will be slight. We now have the weapon—authority to heal the sick and cast out demons—that can bring an entire village or community to Christ.

Hindus are very afraid of the spirit world containing innumerable spirit beings that must be appeased with daily offerings lest their wrath break out against them. They also have to contend with the endless cycle of reincarnation because of karma, whether good or bad. The gospel of Jesus Christ will be very attractive to them, since His followers have power over such spirits and are not subject to reincarnation but rather ascend to heaven upon leaving their mortal body. The miraculous healings they witness tomorrow will be the proof of the power of the name of Jesus over such spirits, and also the evidence of the power of Jesus to completely forgive them of their sins.

There is a degree of unity between churches here which is higher than perhaps anywhere else in Indonesia. This is why in quite rare fashion charismatic, pentecostal, evangelical, and even “non-evangelical” historical protestant churches came together for the Seminar and Crusade.

First we held a Seminar for the local servants of the Lord to train them how to heal the sick and cast out demons according to Jesus’ command in Luke 9 and 10. After the training we held two evangelistic healing Crusade services in the local Sports Arena.

On the first evening I proclaimed Jesus Christ and Him crucified to the people: Isaiah 53.4 Surely he took up our infirmities and carried our sorrows, yet we considered him stricken by God, smitten by him, and afflicted. 5 But he was pierced for our transgressions, he was crushed for our iniquities; the punishment that brought us peace was upon him, and by his wounds we are healed.

I explained to them that His power to heal infirmities—a consequence of sin—proves that He has authority to save us from sin and hell. Then we prayed and asked the Lord to heal for that very purpose.

The first person to come up was a Hindu man who experienced debilitating weakness from his lower back down to his legs. He wobbled up to the front on unsteady legs. I asked him if he could run, and he said no. Then three of us laid our hands on his back and legs and rebuked the infirmity in Jesus’ name, commanding him to be healed. I told him to walk, and he was able to walk with noticeably greater strength and stability. We laid hands on him again, and I told him to run. He obeyed, jogging back and forth at the front a few times before the crowd!

After a while, I asked the trained believers to come forward to heal the sick in Jesus’ name. The greater miracles occurred when the local believers ministered one-on-one to the infirm. Charismatic leaders and evangelical leaders ministered side-by-side in a spirit of unity. A lady whose doctor said that she had cancer on the right side of her lower abdomen came forward with her right side bulging because of the tumor. After one of the believers laid hands on her, the bulging vanished and her right side and left side were even!

A man came to the meeting with extremely poor eyesight. He came up to the platform to testify that the Lord has restored his vision. Interviewing him, Lucy asked him if he could tell the time on a clock far away on the back wall of the Arena. Lucy herself could not distinguish the time. He looked up and said, “it’s 9:30.” I also looked, and after a moment with some difficulty I saw that he was correct.

A young man who was deaf and stuttered severely came up to testify of his healing. He could hear perfectly and was able to speak normally, repeating John 3.16 after Lucy without difficulty.

A boy who was deaf and dumb since birth was able to hear and respond to people calling him.

A man in his forties testified that a growth on his calf had disappeared.

A man who suffered from chronic pain in his arm and shoulder because of a car accident testified that the pain had completely vanished.

A mother brought her lame four-year-old son—apparently with mild Down’s Syndrome—to the meeting. The child began to walk after a mother and her two teenage sons ministered to him. He even tried to jump up and down!

Several people testified of healing from chronic knee problems and deliverance from pain in various parts of their bodies.

And there were others….

God was greatly glorified through his servants, and His people rejoiced! 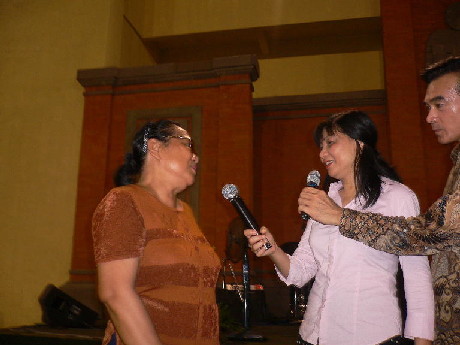 Testimony of miraculous healing by the power of Christ’s name

When I gave the altar call, souls responded and come forward to accept Christ. Some Hindus did not come forward because of fear and embarrassment, but accepted Christ. They could not resist God’s offer of freedom from the fear of angry spirits and from the prospect of the endless cycle of reincarnation.

On the second night of the Crusade we presented Elijah’s Challenge to the people. There were numerous infirm people who came for healing. We shared about how Elijah challenged the prophets of the false god to pray to their god to send fire. Baal failed to answer their prayer. Then Elijah stepped forward, calling on the name of the LORD to answer by fire. The fire fell from heaven, and all the people acknowledged that the LORD is the true God. That night we did something very similar.

I asked any servants of other gods to ask their god(s) to heal the infirm people who were present. Then we, the servants of the true God, would do the same. Whoever answered with healing fire would be acknowledged as the true God.

Many came up to the platform to testify of what the Lord had done for them. The miracles performed in Jesus’ name were the proof that our God is the true God, and that Jesus is the only way to Him.

A young woman was born with a defect in her foot, rendering her unable to walk normally…the heels of her feet could not touch the ground when she walked, remaining inches above the ground. When a local pastor ministered to her, she was healed and ran back and forth on the platform quite normally.

Some people with lung infirmities were healed.

Several people were healed of lower back problems and joint pain.

One young man in his earlier days had resisted arrest by police and his legs were severely beaten in both legs. From that incident he suffered from chronic pain and partial disability in his knee. During the mass healing in Christ’s name he was completely healed and demonstrated it by running back and forth at the front of the arena, jumping up into the air and kicking vigorously.

One young woman came to the meeting with very poor vision in one eye. She was healed in Christ’s name and could see clearly.

Precious Hindu souls accepted Christ and were born-again into the Kingdom of Light.

Restoration has arrived for the Church of Jesus Christ in Bali. They are going to boldly attack the stronghold of Hinduism with power just as they have been trained. There is going to be a mass movement of Hindus into the Kingdom of God. They will fulfill the Great Commission on this island where two years ago a terrorist bomb killed 202 people. The Church in Bali needs the Lord’s strategy how to wield the weapon of miraculous power to accomplish the goal of mass conversions of Hindus to Christ at the village or community level.