Reconciliation between Evangelicals & Charismatics in Vietnam

According to our host pastor, this was the very first time the pastors and leaders had come together to be trained to minister healing to the sick as confirmation that Jesus Christ is Savior and Lord. A few years ago, an American evangelist very well known in charismatic churches came to Vietnam and ministered to a group of about sixty pastors. Included in this group were pastors from the Christian & Missionary Alliance (CM&A), a denomination in this country which traditionally holds to a conservative view of miraculous healing. The CM&A pastors were unable to receive the teaching from the American evangelist, and as a result decided to have nothing to do with the ministry of miraculous healing. This helped to sustain the division which exists between the CM&A churches, which are legally registered churches, and the house churches, which are underground. Abetted by the schemes of police authorities, there is now mutual suspicion between these two branches of the body of Christ. One would suspect the other of working with communist authorities.

In our Healing Encounter last July we presented a teaching about miraculous healing based on over two hundred Scripture verses that focused on the Great Commission instead of the charismatic gifts of the Holy Spirit. We examined the miracles done by Jesus, Peter, Paul, and the early disciples that drew people to faith in Christ, and discovered patterns and principles. When during the Healing Encounter training the pastors applied these principles to minister to the infirm in our midst, the Lord did miracles of healing through them. It did not appear to matter whether the pastors were conservative evangelical or charismatic.

The conservative CM&A pastors, I was told, were able to receive the teaching about miraculous healing at the Healing Encounter. One barrier to reconciliation between the two parts of Christ’s precious Body in this country is being removed. Praise be to God! 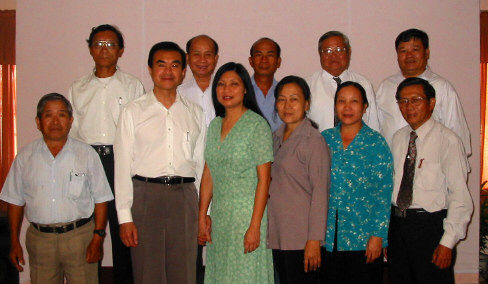 Pastors minister healing to one another at the Basic Training 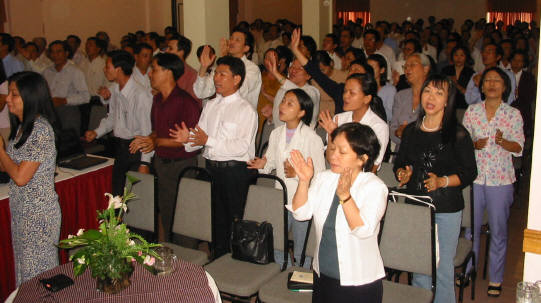