In the middle of Bandar Sunway, there is a small group of Africans, mostly from Nigeria, who meet every Sunday evening to worship God at Sunway Lagoon Club. On 9th September, I was invited by Brother Joseph, the leader of this Nigerian Church, to preach. Then Brother Stanley, the worship leader, led in a series of African and English worship songs.

Without using any songbooks or audiovisual aids, these twelve Africans in the congregation seemed to know their worship songs perfectly as they chanted, swayed, danced and clapped as. Grace and I enjoyed our first truly African worship thoroughly. Even though most of the time, we did not understand what they were singing, we sensed the sweet presence of the Holy Spirit. As the worship progressed, some members of the congregation were on their knees, hands raised high and singing their hearts out to the Lord.

My sermon was about the importance of obeying the Ten Commandments. They enjoyed the memorization part and in less than 15 minutes, they had all learned the Ten Commandments by heart. As the Ten Commandments were expounded with scriptural portions from Exodus 20, John 14, Romans 7 and 1 John 1, the face of each individual began to show conviction. I shared about the terror of being in the hands of an angry God. I could see that they were especially concerned about “false conversion”. They were told to take authority over their flesh. After the sermon, there was a hushed stillness. Everyone was given one minute to confess his sins, on his own, before the Lord. Many of them lowered their heads into their cupped hands – covering their faces in prayers. After the one minute was up, I led them in a prayer of repentance. They willingly followed every word and I could sense a sense of relief as the grace of Christ was fully appropriated upon these repented souls.

After that, I asked if I could heal some of their sick. Two men came forward. I explained briefly about Elijah Challenge and how we all have the authority to heal in the name of Jesus in conjunction with evangelism. I also asked them whether it was easier to heal the sick or just pray for the sick. They agreed that praying for the sick would be an easier option. Subsequently, I challenged them to search the Bible to learn that God wanted them to heal the sick.

Then I invited some of the Nigerian disciples to lay hands on the first man who had high-blood pressure and a pain in his heart. I asked the man whether the pain was still there in his heart and he answered in affirmative. Then after giving instruction to the brethren assisting me, not to close their eyes and to follow my command, word for word, I began the healing process. After two rounds of taking authority, the man smiled and expressed amazement that the pain was gone. The rest of the brethren gave the Lord a loud clap offering.

The next Nigerian brother was healed instantly of the pain in his abdomen on the very first round of taking authority. Everybody was all smiles because they had seen what the living God was doing in the midst of their small church.

Before leaving the premises, I promised that I would return to teach them the comprehensive course on Elijah Challenge End-Time Model of Evangelism. Praise the Lord that I do not need to travel to Africa to reach out to the Africans. God has sent them to us here in Malaysia. 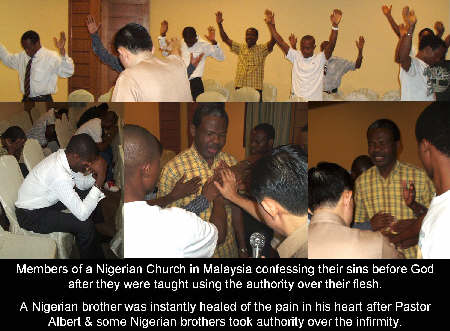 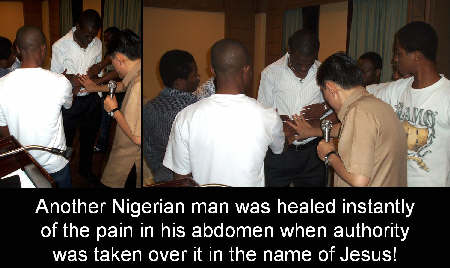