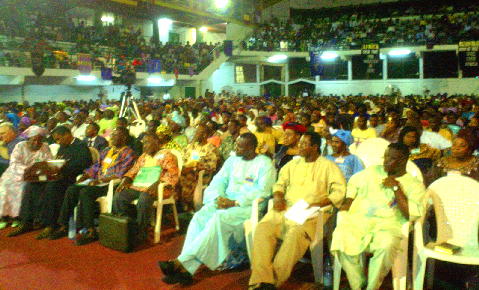 Above: Left Side of Main Hall during Plenary Session

Below: Right Side of Main Hall during Plenary Session

As one of the plenary speakers, I addressed the 10,000 delegates who attended Global Prayerquake Summit 2004 in Nigeria from January 14 through January 19. Pastors and leaders came from every continent in the world to attend the largest annual conference in Africa, organized by Rev. Mosy Madugba. In a Monday afternoon plenary session, we spoke of the restoration of God’s miraculous healing power to the church of the last days as a tool to prove that Jesus is Lord and Savior. Before the large crowd of delegates, God graciously demonstrated this power through us as a woman with arthritis in her knees was able to bend her knees with no more pain. Afterwards more people with similar problems were healed as we invited delegates to come forward to minister to them as he had taught. When the Plenary Session was over, about one-half of the delegates remained in their seats to be trained in our Workshop on Evangelism and Healing Ministry. The others left to go to the eleven other Workshops being offered in other locations.

Again the Lord graciously used him to teach His servants. Near the end when he announced that he would again ask the Lord to demonstrate the healing authority that He has entrusted to His people, between 150 and 200 people with infirmities came forward and crowded the front of the Hall. Another flood of believers came forward when I asked for volunteers to minister healing through the laying on of hands. Again he led them to pray over the sick, commanding the infirmities and any demons to go in the name of Jesus Christ. Many, many were healed and streamed up to the platform to testify of how the Lord had healed them through His servants. There was much rejoicing. He told the crowd that they had just witnessed a demonstration of the authority that the Lord had given to His people to heal the sick to prove to the world that Jesus is the Son of God and the only way to the Father. When he asked how many of them wanted to take the power of the gospel out from the four walls of their churches into the public places of their communities, hands shot up from all over the Hall.

At the Tuesday evening Plenary Session, we ministered at what was billed as a deliverance service. After sharing the word of God, he called forward those who had just been trained in his Workshop to minister healing to the infirm to prove that Jesus indeed had authority to forgive sin. The Lord performed wonderful miracles through them. Among them was a woman who came to the meeting using a four-legged walker. She had been in a terrible car accident in which all the other people in the car had been killed. She herself had bones in her body broken. As a believer prayed over her, she began to walk without the walker. Testifying on the platform, she began to cry tears of gratitude to the Lord. Another person healed was a gentleman who had suffered a stroke and paralysis on his right side. He said he had not been able to walk. After prayer he went up to the platform walking back and forth quite normally. He could raise his right arm without difficulty. The crowd broke out in applause to the Lord. That evening in very dramatic fashion the Lord demonstrated the power and authority He has entrusted to His people for confirming the gospel through miraculous healings.

Since the Summit many of the servants of the Lord have begun to preach the gospel with a new boldness and to heal the sick fearlessly to prove that Jesus Christ is Lord and Savior.