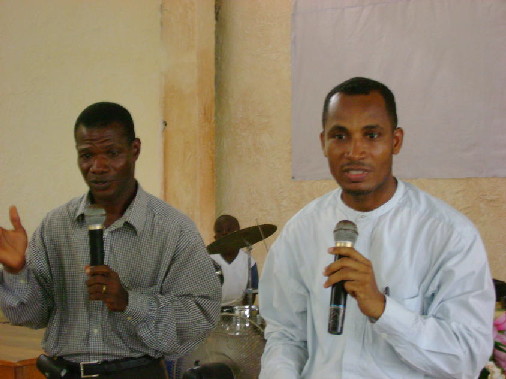 In Abidjan the capital of French-speaking Ivory Coast, we equipped thirty to thirty-five servants of God. The Lord anointed us to teach them how to heal the sick the way that Jesus did. Instead of pushing people down to the floor and passing these “manifestations” off as miracles, I taught them to lay hands on the infirm and exercise their authority over disease and demons as Jesus Himself did. During the time of demonstration about fifteen of the servants of God present testified that the Lord had healed them of their infirmities in this way. Several testified that they had been healed of poor eyesight. It was quite powerful, especially for a training session. 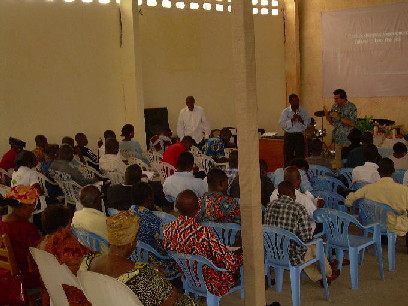 Above: Teaching the local servants of God

Below: Training them at the front to lay hands on the infirm 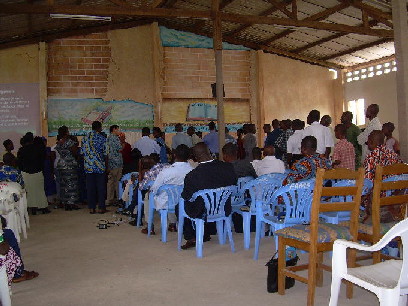 Our host Pastor Morris Yeedoun of Latter Rain Harvest Ministries commented that they had had Crusades and accompanying Seminars before, but this was different. Another pastor told me that he had even been to Dr. Billy Graham’s heralded Evangelism Conference in Amsterdam back in 2000, but the training in healing was not as practical as was provided here. The pastors here were initially cautious in attending the Seminar because of some unbalanced teaching brought by another evangelist that had brought confusion in the recent past. Pastor Morris would like to plan another event for us next year where the equipping of hundreds of pastors can have severe impact on the Great Commission on the city.

The location of our two outdoor evangelistic meetings was in the neighborhood of the church where the equipping had been held. It was at the crossing of two wide dirt alleys that lie off the paved roads of the city. A wooden platform about two feet off the ground had been constructed to serve as our stage. The worship and praise drew people from the immediate neighborhood. There were perhaps 150 people seated and standing around us. This is the kind of small event that local churches can normally do entirely on their own, without the help of outside funds or outside evangelists. 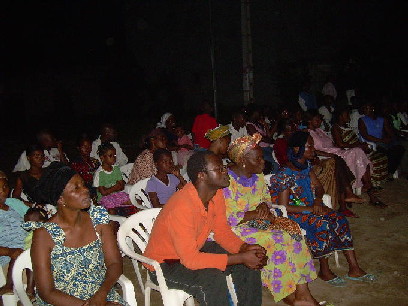 After the praise and worship, I ascended the stage and told the people that we would first heal the sick, and after that proclaim the Kingdom of God. In Luke 10:9, Jesus commanded the seventy disciples he sent out to do precisely that. I instructed the trained servants of God to come forward and stand in a line facing the people. Before we called on our God, I challenged any practitioners of witchcraft present to attempt to heal the sick using their powers. I waited for a few moments, but no one accepted the challenge. Then we called on the God of Elijah to send the fire of healing that the people would know that He alone was the true God. After the prayer I invited the infirm to come forward to receive their healing. The servants of God ministered to them as they had been taught according to the model of Jesus in Scripture. 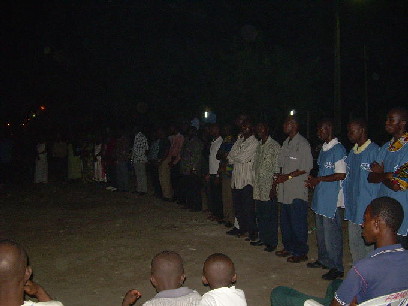 Above & below: Servants of God lining up and preparing
for battle—healing the sick in Jesus’ name 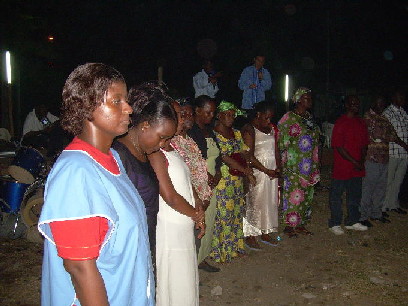 After a few moments, people began to come up to the stage to testify that they had indeed been healed in the name of Jesus Christ. One woman testified that she could no longer find the growth in her stomach area. A little girl who had not spoken since birth started to speak to her mother for the very first time, saying “Maman” which means mother in French. 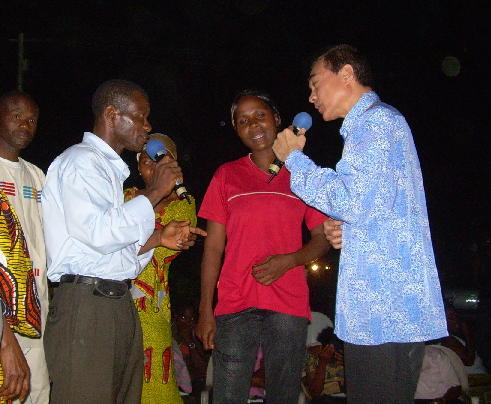 The growth in her stomach has disappeared 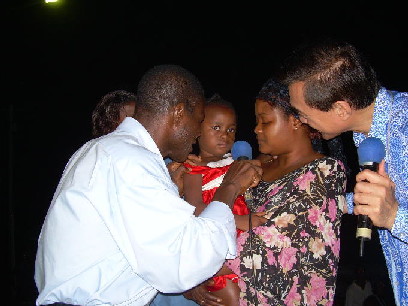 Little girl mute from birth speaks to her mother 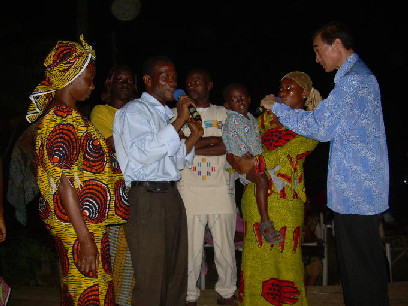 Other testimonies of healing from the stage

After all the testimonies, I proclaimed the Kingdom of God to the people, telling them that the only way to escape from the kingdom of darkness and enter the Kingdom of light was by repenting from their sin and following Jesus as their Savior Lord. About twenty-five people immediately responded and came forward. It was a joyous occasion for the servants of God and the believers who were there. 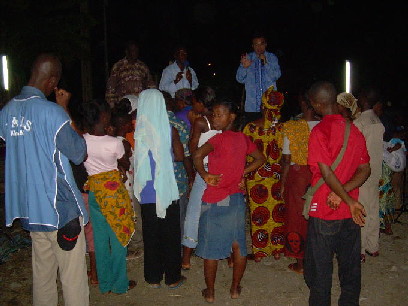 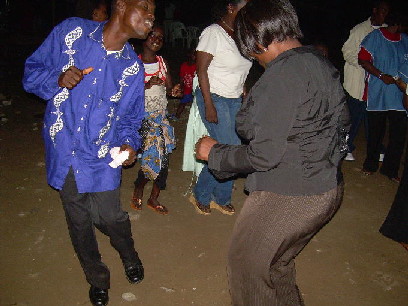 Dancing for joy before the Lord afterwards

The second outdoor meeting the next evening was similar in outcome to the first. Before the start of the second meeting, rain began to fall in the area. One of the brothers, an evangelist who had attended the training, got down on his knees and called on the name of the Lord. The rain immediately stopped. An eyewitness testified to the miracle.

These are the kind of outreaches that the local churches can now do completely on their own. If many churches do this regularly and follow up on the souls that are saved, the Great Commission can be fulfilled in Ivory Coast. There is no more need to depend on huge mass Crusades held by superstar one-man-show evangelists.

In April 2007 the following message was received from Brother Emmanuel Luvuga in Ivory Coast:

“Your teaching helped us much and if one is effective today in the ministry it is because of you. The exploits which we make will arrive to you when God provides cameras for us.”

The complete message in the original French is below: