Ministry of COMPASSION blends with ministry of POWER to draw souls in Surabaya, Indonesia

“Sister Theresa” in the city of Surabaya has been given unprecedented grace and favor here in Indonesia through her ministry of compassion to the poor and those living in the slums—people whom the Lord dearly loves. Thousands have been touched and drawn to the Lord through her ministry of kindness and food to the poor. One thing she has not seen and has prayed for fervently is the manifestation of God’s healing power to the many infirm among the poor. She knows that such healing power in the hands of the many slum leaders and pastors she has discipled will shake this second largest city in Indonesia for the gospel. For this reason she invited us to hold our Healing Encounter for the slum leaders and pastors and then to minister in a special Healing Crusade for the Handicapped held in a convention hall. 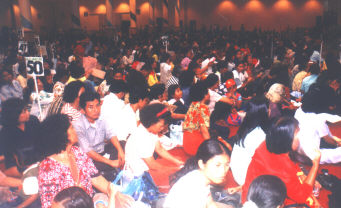 Over 4,000 people gathered to hear me share from John 6—Jesus as the bread of life and the only way to the Father. I then asked the Lord to confirm His word through miraculous healings. Along with teammates Deborah Wallace and Donna Elms I ministered mass healing from the platform, and the Lord was gracious to heal several people simultaneously, including some suffering from deafness and, if I remember correctly, near blindness as well as emotional trauma. The photo at right shows some of the people testifying of their healings. 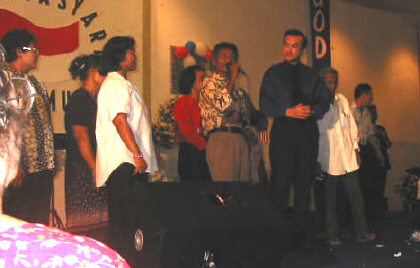 Then I asked the believers trained in the Healing Encounter to come to the front to minister healing to the many who had not yet been healed. The Lord’s healing power rested upon the believers, and miracles took place through them. Many more people came up to testify of impressive healings as these believers, none of whom had done this before, laid hands on the sick and with authority rebuked and commanded the infirmities to be healed. They were so blessed and encouraged to witness how God used them, “ordinary” believers, to perform miraculous signs to confirm the gospel. They will never be the same again!

As the testimonies continued to mount, I challenged the listeners not just to take the free food provided for them through “Sister Theresa’s” ministry, but to take the true bread of life who came down from heaven to give life to the world. Many responded.

God has begun to restore His miraculous healing power to His Church in Indonesia!

Our host “Sister Theresa” had only invited handicapped Christian children to attend the healing service along with their parents, expecting perhaps 300 people. But when word got out to the community about a healing service, the auditorium was filled to overflowing with people lining the walls and sitting on the floor, quite a few of them non-believers and their handicapped children. 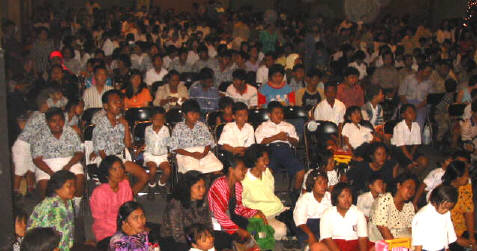 Before the meeting began, a visibly nervous “Sister Theresa” approached me and asked me to “do my best” in ministering healing to the children, for so many had come at her invitation to receive healing in the name of Jesus. I assured her that I would, and more importantly that the Lord would be faithful to confirm His word with miracles.

As the meeting began, Donna Elms gave a message to the people from Mark 2 where Jesus graciously heals a paralytic. Then she handed the microphone over to me to conduct the healing portion of the meeting to confirm the word of God. The Lord had arranged for me over the previous two days to train a group of fired-up young people from the School of Frontline to minister healing in the name of Jesus. They had come to the meeting ready to put their training to use, and I called them to the front to minister to the handicapped children.

“Sister Theresa” and I first called for deaf children to come up. They streamed forward to the front where the Frontline students began to minister to them with authority and fire as I lead them. After a couple of minutes previously-deaf children began to come to the microphone with testimonies of healing. They were interviewed one by one as the crowd looked on with awe and gave glory to God. In the photo below a boy who was deaf and mute since birth is being interviewed. Hearing for the first time in his life, he is slowly enunciating words that are being spoken to him. Praise the Lord! 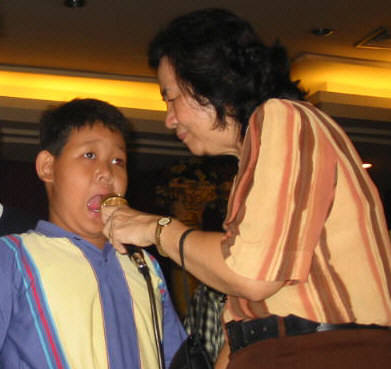 I seized the opportunity to extend an invitation for the people to accept Christ, and precious souls stood up and prayed to receive Him as Lord and Savior.

The Lord was again gracious to manifest His healing power at Go Skate, where about 4,000 slum-dwellers gathered. These are the poorest of the poor, those who live in incredible conditions under bridges (one of our team members got sick just approaching the bridge) and in graveyards. God has done a mighty work of compassion through “Sister Theresa,” and thousands of these neglected souls have come to the Lord under her persevering ministry of love. Each week thousands of them gather in this covered public parking lot called Go Skate to worship and rejoice in the Lord, as well as to receive bread. It is absolutely incredible that such a meeting can take place in a country like Indonesia. The photo below shows thousands of people sitting on the floor of the parking lot at the meeting.

I preached the gospel before these precious souls, and told them that Jesus was the only way to the Father. As proof we would ask the Father in the name of Jesus to do miracles of healing. If Jesus was not His Son, He would not hear and no miracles would take place.Since Jesus IS the Son of God, the Father did miracles of healing through the trained believers after we prayed in Jesus’ name. Many people came up to the platform to testify of their healing, some smiling with wondrous glee at what the Lord had done for them. Let me tell you, God gives grace to the poor!

I reminded the crowd that the miracles proved that Jesus indeed is the only way to the Father through the forgiveness of their sins by His redeeming death on the cross. When the invitation to accept Christ was given, a big handful of precious souls stepped up to receive the forgiveness of their sins through faith in Jesus Christ. The photo below shows some of the people responding to the altar call…some are weeping. 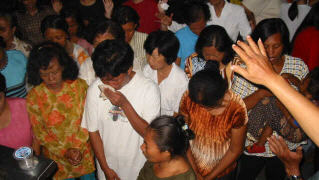 “Sister Theresa” has decided to continue the ministry of healing and soul-winning in these weekly meetings according to pattern that I’ve laid down for them. The trained believers are able to minister healing confidently and effectively. All they need is someone to lead them from the platform as they minister, and one of the pastors can certainly step into my shoes.