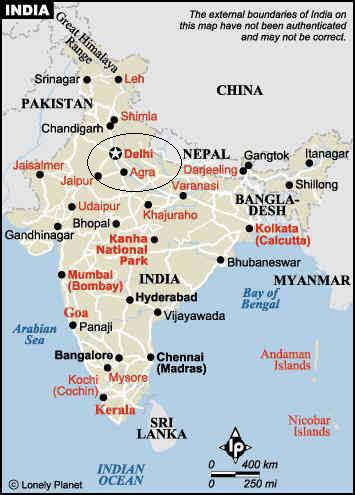 The event was held in North India, outside of the capital New Delhi in the north 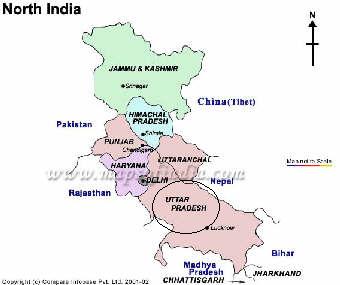 The equipping sessions were held in the local Methodist Church, so quite a few of the participants had a conservative evangelical background. The feedback was very positive and encouraging. Never before in their lives had they heard such teaching from the Bible. Even Pastor Titoo Peter, District Superintendent for the Methodist Church, was enthusiastic at what he heard and saw at the subsequent Crusade. At the training sessions the Lord graciously confirmed the teaching to them by healing infirmities as they laid hands on the infirm. Host Pastor Simon Haqq noted that the applause that broke out periodically was most unusual for Indian believers, whether charismatic or evangelical. 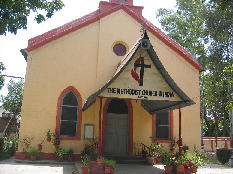 The equipping was held in the Methodist Church of Meerut

On the second day of equipping, every person with an infirmity who came forward for ministry was healed as the believers-in-training laid hands on them and exercised their authority. This included three ladies who had suffered from hearing impairments. See the photos below. 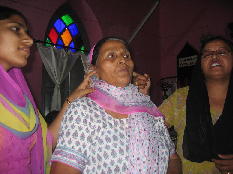 Believers learning how to open the ears of the hearing-impaired 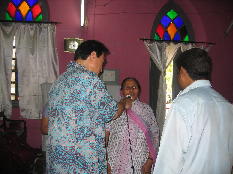 The same woman testifies that her hearing has been restored 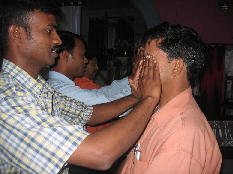 Learning how to heal impaired eyesight as Jesus did 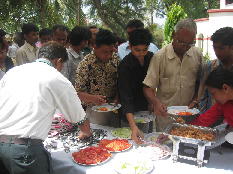 We provide a good lunch for the participants 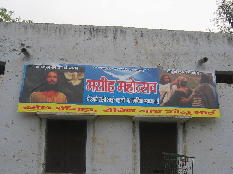 A banner for the open-air Crusade meetings

After the training, three Evangelistic Healing Crusade meetings were held in the open air. At the first meeting Pastor Simon Haqq led off with preaching since we had been informed that government officials would be checking on us early in the meeting. It would be better for them to see an Indian preaching than a foreigner. When he gave the altar call for a commitment to Jesus Christ after his message, about 800 people stood up.

The gospel is proclaimed to the poor

After that we stood up to speak. We announced that Jesus would be healing the sick to demonstrate to the lost that He has authority to forgive sins. Sin has terrible consequences both now and especially after death, whether for Hindus, Musl__ms, or Christians. The trained servants of God and believers were asked to come to the front, and together we ministered mass healing to the infirm in the crowd. Immediately afterwards about twenty people came up to the platform to testify that Jesus had healed them. Among the testimonies….

The Lord’s glory was evident. Unfortunately, there was no time for the trained believers to minister to the infirm one-on-one through the laying on of hands before the end of the meeting. 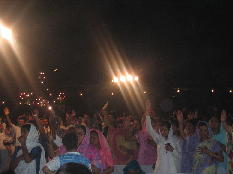 “Tell them that ‘the kingdom of God is near you.'”

At the second open-air Crusade meeting the Lord was faithful to confirm the preaching of the gospel with miraculous healings. First the Father in heaven was proclaimed as the Only True God over India’s 300 million gods and Jesus Christ as the only way to Him. The proof of this would be the powerful miracles that would be done in Christ’s name, things that no other god has the power to do. 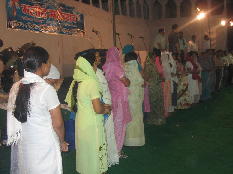 Trained believers prepare to heal the sick in Christ’s name 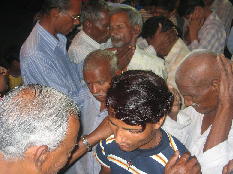 The laying on of hands as taught in Scripture

The trained saints marched forward as the vessels by which the Lord would heal the infirm. After public prayer to the God of heaven, those with infirmities came forward to be healed. As the saints laid their hands on them and exercised their authority over the diseases and demons, God healed many—it was estimated that two to three times as many as were healed on the first night. They all went up to the platform to testify. Among the many testimonies were: 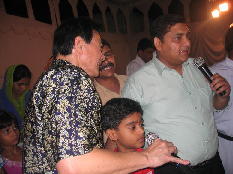 Through the great miracles, God demonstrated beyond any doubt that He is the only true God and that Jesus is the only way to Him. The evening was historic. Never before in Meerut had God been glorified through His “ordinary” disciples in this way. A pastor and apostle named William Cary who flew in from the distant city of Hyderabad to attend the meeting said that India had never before witnessed an event where God used ordinary believers to perform miraculous healings.When miracles happen during a Crusade, it is usually through the ministry of a single superstar, one-man-show evangelist. When he leaves town, the miracles stop. But at the second Crusade meeting God was glorified through the body of believers. The focus was taken away from any single minister and put where it belongs—on the Lord and His Church.

The crowd on the third evening of the Crusade

The Crusade meeting on the third and final evening witnessed the largest crowd of the three nights. According to one estimate the attendance approached 2,000 as people in the area heard about the healings taking place and came to see for themselves. Mark 2 was shared to argue that Christ’s power to heal infirmities—which ultimately are the consequence of man’s sin—proves that He has authority to forgive sin and save us from condemnation in hell. It was added that while all religions are “good and teach us to do good” (not wanting to offend the 1,000 Hindus, Musl__ms, and Buddhists present at the meeting), there is no hard evidence or proof that any religion has authority to forgive sin. In contrast, Jesus gave many proofs of his authority to forgive sin: his healing the sick as recorded in Scripture. The one who can remove the consequence of sin is the one who can remove and forgive sin itself.

Mark 2:10 But that you may know that the Son of Man has authority on earth to forgive sins….” He said to the paralytic, 11 “I tell you, get up, take your mat and go home.”

Then the trained believers came to the front. The Lord Jesus was implored to use them to heal the sick in His name. The testimonies from people who would be healed would be undeniable proof to everyone that only Jesus has authority to forgive sin and grant eternal life—in stark contrast to powerless religion. 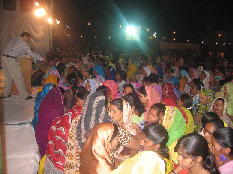 Many come forward for healing

The believers made short work of the diseases and demons; the fight was short and sweet. After a few minutes the platform was swarming, even overrun with people who had been healed and who wanted to testify of what Jesus had done for them. Since it was so difficult for them because of the crowd to get to the steps which were all the way at one end of the platform, some ladies simply pulled themselves up and climbed onto the stage from the front (as one might see at a rock concert). Some of the testimonies were riveting. The wonderful testimonies of the previous evening paled in comparison. All this happened we were told in front of a thousand Musl__ms, Hindus, and Buddhists who were in the crowd. Many of those who testified of being healed were not believers. 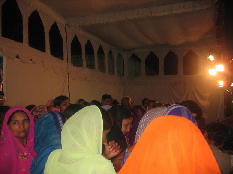 Those who are healed swarm onto the stage to testifiy 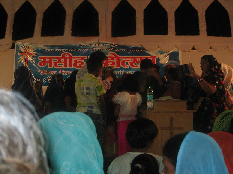 There were so many people healed that there was no time for everyone to give their testimony and no time to give a formal altar call for salvation. But very good seed was planted.

News about the events of the second Crusade meeting the evening before had already found their way into two local newspapers. One of the local leaders, an elderly Methodist gentleman serving Christ in Meerut for thirty-six years, commented that in all those years he had never seen such marvelous things with his own eyes. 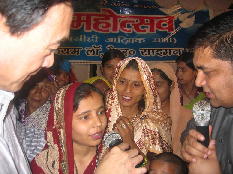 This is just the beginning. The trained believers are going to obey Christ’s command to go out to the community to “heal the sick, and tell them, ‘the kingdom of God is near you.'”

A handful of believers (including a practicing medical doctor) who attended the meetings made the decision to serve the Lord full-time. They submitted their biodata and resumés to Pastor Simon Haqq and his team.

Villagers return home after Crusade rejoicing on bus chartered for them

Gracious message received from host Pastor Simon Haqq on May 15, 2007, ten days after the event:

“Really we are all blessed, the Lord has used mightily in the city of Meerut, Uttar Pradesh, North India. Almost everyday we receive calls from people, around so far we have received 732 calls. People asked about you. Meerut people they love you, remember you, and praying for you.”

Received on July 2 from a missionary who attended the event:

“I wanted to write and let you know, again, how much we appreciated the teaching you brought to Meerut. We have applied much of your teachings to our personal ministry and have seen much fruit in the past couple of months from it. We had 12 student volunteers in Meerut this past summer and taught them all from your material about using their God-given authority. As a result, several people have indicated decisions for Christ due to healings and miracles. A university professor from a large Christian college even took your teachings with him and indicated a possibility of including it in his teachings this next year. We’ve also included it in our trainings as we’ve been training hundreds of nationals in how to plant churches. So thank you again for your influence and for your teaching from God’s word.”

Some of the trained servants of God went to the village of Sijarsi where they fed the poor, healed the sick, proclaimed the gospel, and planted a church.