Robert and his wife Nicole attended The Elijah Challenge Training at Encourager Church in Houston in the summer of 2005. There Robert and Nicole learned how to equip the body of Christ to heal the sick in the name of Jesus Christ for the purpose of demonstrating to the world that Jesus is the only way to the Father.

In September 2006 Robert held a Pastors’ Conference in Africa. It took place in Mbarara in Uganda where it shares a common border with Rwanda and Tanzania. In the meetings Robert taught the believers from Scripture how to heal the sick and cast out demons in the name of Jesus Christ. He imparted wisdom and revelation concerning healing to the participating pastors who numbered between 225 and 250. He was not there to “give them fish,” but to teach them “how to fish.”

During the meetings, Robert had the participants come to the front to minister healing to the infirm as he had taught them from Scripture. Many miraculous healings took place instantly as they laid hands on the infirm. Among others, twelve people who suffered from impaired vision ranging from blindness to severely deficient eyesight were healed in the name of Jesus. Robert tested the eyesight of some of these and found that they could see clearly.

Twenty people had tumors in their bulging stomachs. All of them were healed. Their tumors literally shrank and disappeared on the spot as the believers exercised their authority over disease and demons in Christ’s name.

These were not “one-man-show, superstar evangelist” meetings, but rather meetings where the body of Christ was equipped to minister with powerful evangelistic weapons to become an effective fighting force for the Kingdom of God. 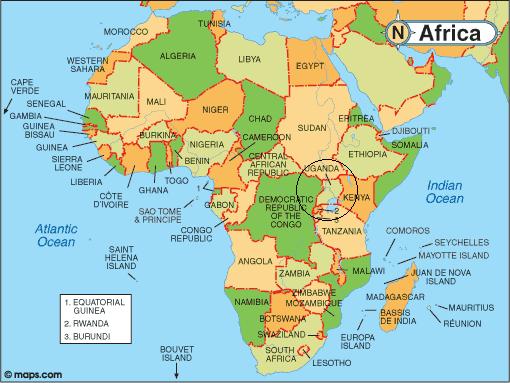 Uganda (encircled) is in East Africa 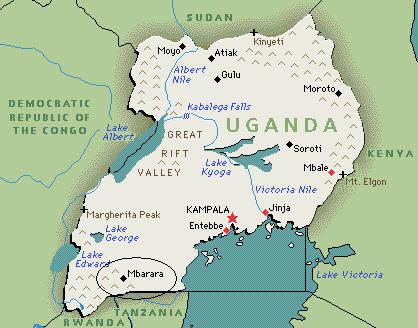 Mbarara is in the south of Uganda

Below is the Cockburn’s report following their mission trip.

“And as you go, preach saying, “The Kingdom of heaven is at hand.” Heal the sick, cleanse the lepers, raise the dead, cast out demons. Freely you have received, freely give.” His mandate changes not, even way, way, way out in the bush!

This is our third trip to this village, which is 1 1/2 hours up into the mountains past Mbarara. Again, hundreds were born again! Many witch doctors, tribal people and Musl__ms. At least 800 people were healed. Four hundred people had demons cast out. The church is 400 members strong and growing! A beloved saint they call “Mamma Joy”, who received prayer last summer, was healed from AIDS.

These kinds of signs and wonders cause the church to EXPAND as the Father displays His GOODNESS. All left the week nourished both physically and spiritually. Praise the Lord!

We have returned healthy and feeling incredibly privileged to be His ambassadors.”