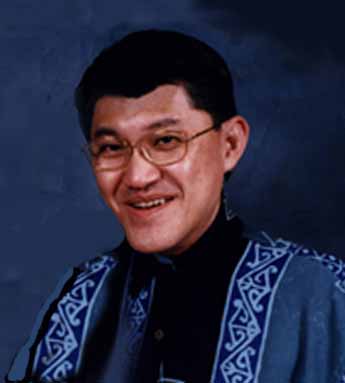 Pastor Albert Kang was trained under The Elijah Challenge. Afterwards he testified to us, “Praise the Lord for training us. You do not know how grateful we are. This is the first time so many signs and wonders are happening in my ministry and in such a short time. …Honestly, in my 25 years of ministry, I have never experienced so many miracles in such a short time.” 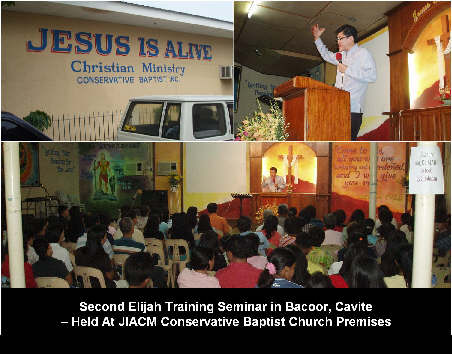 For this second Elijah Challenge Training Seminar held in Bacoor, Cavite, pastors and church leaders from 27 churches of various denominations gathered at Jesus Is Alive Christian Ministry, a Conservative Baptist Church. The pastor of this church is Rev Nesto (Ernesto Tamayo), who is the former chairman of the Bacoor Ministerial Fellowship. Pastor Ana, Pastor Cesar and Pastor Reggie had worked closely with him and also Rev Olie (Rolando Lapuz), the present chairman of the ministerial fellowship, in various ministerial and communal projects. With this good relationship, they were able to convince both Pastor Nesto and Pastor Olie to give this seminar the fullest support. In spite of his Conservative Baptist background, Pastor Olie was very convinced of the Elijah Challenge’s agenda because he was a recent recipient of divine healing for his backache – after Pastor Ana and some pastors took authority over the infirmity. 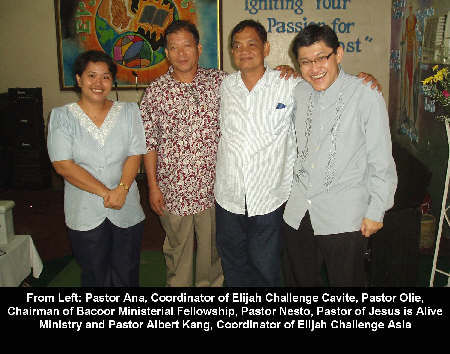 As 20 August would be a national holiday, commemorating the assassination of Ninoy Aquino, the organising pastors decided to use the holiday for a one-day training seminar from 9.00 AM to 5.00 PM. There would be no combined Evangelistic Rally as the participants would be coming from churches in diverse localities. Instead, after the seminar, Pastor Ana and her team would meet with the pastors from different locations and help organise local healing rallies. This would ensure that the new converts will have nearby local churches to attend.

By 9.00 AM, the pastors and leaders were already arriving in force. Some of them had come a long way, travelling as long as two to three hours to get there. The seminar began with some of the most beautiful Tagalog worship songs. I was so blessed by the presence of God as the congregation sang, clapped and swayed according to the rhythmic refrains. I know I have said this before, but the Filipino worshippers have some of the best voices in the world. They really know how to “make a joyful noise unto the Lord”! 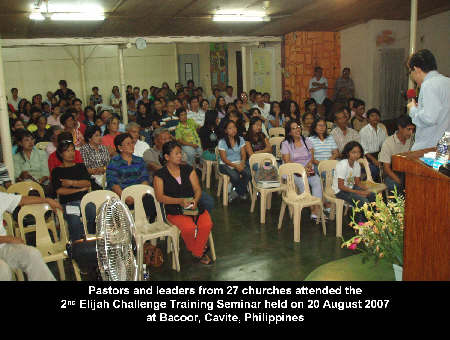 My throat was still giving me problem. What an irony for one to teach healing while one’s throat was still sore and voice hoarse. However, hoarse or not, I was determined to complete the training. It was not a time for doubt but absolute faith that God would carry me through with or without a voice.

Pastor Ana appeared onstage to introduce a young lady who was gloriously healed in the Elijah Challenge healing seminar last July. As the testimony was in Tagalog, I did not get all the details. However, by watching the response from the crowd and the loud exclamation of “Praise the Lord!” and applause, I knew that what had happened to this young lady was really stirring the enthusiasm of the people.

Before too long, I was invited to speak. With the LCD projector screening the biblical verses, teaching was a breeze. I had taken The Elijah Challenge PowerPoint training slides and divided into three sections. Anyway, there was only time to use the first section that had some 300-plus slides. I noticed that the Conservative Baptist pastors were especially pleased when I shared about the need for the unity of the different denominations. Then, I brought up the topic of the three anointings – priestly, prophetic and kingly. I emphasized that the “kingly anointing” was the missing element in most churches today. The pastors and leaders nodded in agreement. They also seemed to agree on the difference between gift of healing and the authority to heal.

The participants were at the edge of their seats and the air was filled with unusual expectation as I showed pictures of the last healing meetings in the Philippines. As some of the healed people, shown on the slides, also attended the meeting, I asked them to stand and present themselves to the congregation. Loud applause broke out as they saw real-life individuals who were miraculously healed. The “before healing and after healing” pictures were a big hit too. Every time, the indicator on the slides flashed “Healed!” loud applause erupted. They were genuinely impressed when I showed pictures of Elijah Challenge crusades conducted by The Elijah Challenge in Niger, Vietnam, Egypt and India. Little did they realise that Elijah Challenge has influenced so many countries in the world. I could see everybody’s faith and enthusiasm were rising to a new height.

Time flew by fast when we were having fun. It was noon and time for lunch. After a quick lunch, the worship team “sang” the people in. Then Pastor Juan testified about what happened to his church, Rhema Miracle Church, the previous day. He said that when I handed the healing service to Pastor Ana, he was a little disappointed. He thought that the power of healing resided in me. He had wanted me to heal his members. However, he thanked the Lord that I did leave. Through Pastor Ana’s direction, he saw the same power of God healing his people. That convinced him that all ordinary believers could use the authority to heal. He then paused for the impact – the result of the healing, without “Pastor Kang”, was that all the infirm were healed – a 100 percent healing rate! The participants cheered and gave a round of resounding applause.

To allow my trainees time to digest their food, I decided not to conduct the healing demonstration immediately. I went on with my teaching for another hour and a half until about 2.30 PM. This time the healing demonstration would be easier than the one in July because Pastor Ana, Pastor Cesar, Pastor Reggie and other trained Elijah Challengers were available to perform the task of healing.

To my surprise, the healing demonstration turned into a full-scale healing session. There were so many people who responded to the call to come forth and be healed. Even though, I had not taught them mass healing, seeing such a crowd, I decided to use it. Pastor Ana had joined me onstage and I beckoned her to conduct the mass healing. Every sick person was asked to lay hands on himself or herself while the rest of the congregation was asked to raise their hands towards the patients. Pastor Ana gave the first command in English. She paused for the results. 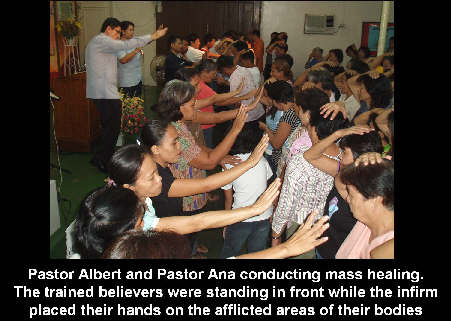 A young lady standing at the front row, apparently caught by surprise that her shoulder pain was gone, let out a curt scream and rushed up the stage to testify. She said that her shoulder pain had haunted her for a couple of years and now it had disappeared. The crowd gave the Lord a rousing applause. An elderly man was healed instantly of his back pain. Two women were healed of back and shoulder pain. A young man was healed of tennis elbow. The testimonies kept coming – people healed of chest pain, breathing difficulties, etc. 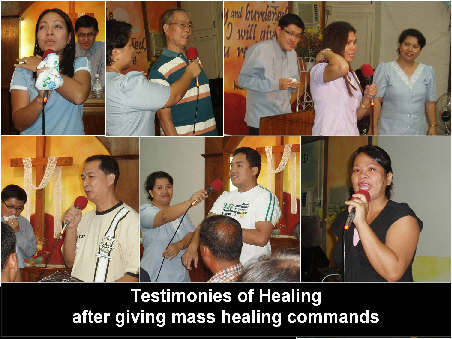 Pastor Ana commanded the second time. This time she did it in Tagalog. Excitement swept through the crowd as those who were healed jockeyed their way to the front. A man was happy that his back was healed on the second command. Two middle-aged ladies had their pain removed from different parts of their bodies. An elderly lady was healed of her hip pain on the first command and her leg pain in the second. A lady with breathing difficulty could immediately breathe properly. A pastor with pain in his body testified that it was gone. The testimonies began to sound like a broken record because everyone testified to the sudden disappearance of pain in various parts of their bodies. What a powerful God that we have – so much so that miracles begin to sound normal to us. 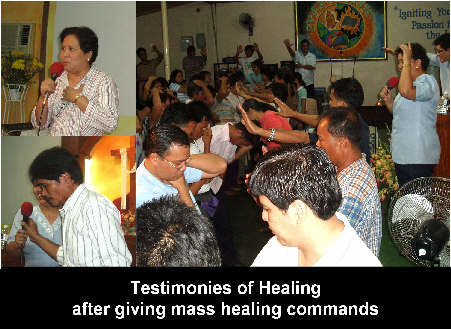 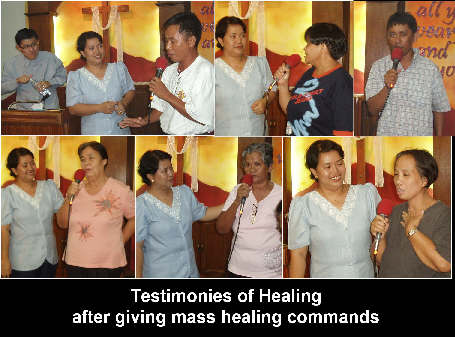 The trained Elijah Challengers were then asked to lay hands on the infirm people. To begin the contact healing process, I explained the importance of placing the hands in the exact spots of infirmity. Pastor Ana then requested that they follow the exact command that she was about to give. Later, she was to ask them to appoint a leader in the team to take command of diseases. The rest of the team members would repeat the command of the leader. As expected, after authorities were taken over pains and diseases, testimonies started to stream in. Pain in bodies, organs and limbs suddenly disappeared in the name of Jesus. A young lady testified animatedly that during the first command, her blurred vision began to clear up. By the time, an Elijah Challenge team laid hands on her, she could actually see very clearly. 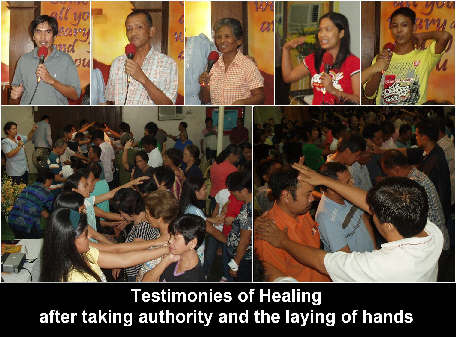 I saw one lady closing her eyes in intense concentration as the trained believers took authority over her arthritic knees. All of the sudden, she began screaming and laughing. Then she was literally jumping and dancing while shouting at the top of her voice, “I am healed! I am healed!” What an amazing sight! It was reminiscent of the healed crippled beggar in Acts 3, who was walking, jumping and praising God.

A pastor, with pain in his head and shoulder, testified that he had to go through nine rounds of command before he was healed. He claimed that while the Elijah Challengers were taking authority over him, the Holy Spirit convicted him of a particular unforgiving situation. Immediately, after he confessed and asked God to forgive his sin, he was healed! The number of people was equivalent to that in the last healing crusade – too numerous healing testimonies to recount in this report.

After the people had calmed down and returned to their seats, I continued my teaching on taking authority over the flesh. The participants were led to memorise the Ten Commandments before I explained the profound implications these laws would have on their lives. After having done this topic numerous times recently, I was able to implement the “Love Jesus Test” without much effort. They promptly failed and thus became candidates for confession of their sins and repentance of their wicked ways. When I asked the participants if they really want to repent, majority of them said, “Amen”. As in the sight of God, pastors and church leaders also needed to repent and “go and sin no more”, I confidently led them in a prayer to that effect. 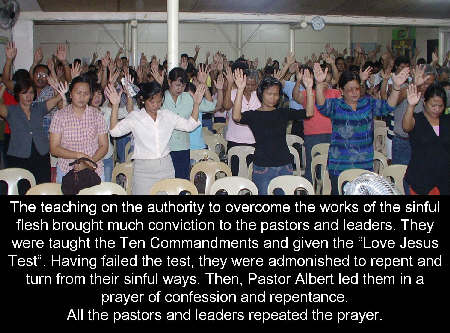 The meeting ended early at 4.00 PM so as to give those who were not healed earlier, another opportunity to be healed. Pastor Ana once again took the lead in this second healing session and more were healed in the name of Jesus.

Later, two pastors requested that we bring such training to Bulacaan and Quezon City. In the brief meeting, it was agreed that Pastor Ana and her team will conduct the healing seminar and crusade in these locations. I was beaming with joy because my “Elishas” are on the move – now they are getting invitations to conduct Elijah Challenge Training Seminars! I thank God for Pastor B who is my Elijah! He imparted this “lost” biblical knowledge to me who is one of his many “Elishas”. Now I am an “Elijah” in my own right and I am praying for more “Elishas” to come forward. Glory to God!