The Elijah Challenge in INDIA: Many precious souls saved, healed, & baptized in Uttar Pradesh and Punjab 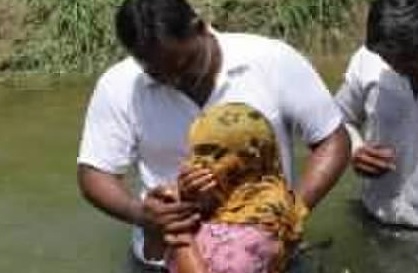 The meeting in Firozpur had a gathering of about 300+ people. Approximately 120+ people accepted Jesus Christ. Shakuntala and Pastor Vikas Teji ministered to the sick and needy. Several people testified of healing and miracles. One particular testimony of a lady having a tumor in her stomach said that her tumor was gone. She got herself examined the following day and reported the miracle. Another lady came with swollen feet and immediately afterwards her swelling vanished. Food was served to all after the meeting. Twelve people were
baptized on the following day. The meeting in Amritsar had about 185+ people in attendance. More than 75 people accepted Jesus Christ in this meeting. People experienced a great move of the Holy Spirit in this meeting, particularly young girls were touched by the Holy Spirit. Many families asked for ministry for their children to be set free from drug addiction. A lot of those said that they felt the move of the Holy Spirit and feel that their families were delivered from addiction. We hope to hear more testimonies in the coming days. Food was served to all after the meeting. A baptism service was held on the following day and seven people were baptized.
. With regard to the place where we had a meeting in Amritsar, there was a very dedicated pastor who was shot dead by the Hindu extremists in October 2020. After this incident the ministry work nearly stopped in the area as people were terrified and distressed. But by God’s grace the doors opened and we were able to minister to the people in this area after 8 months, and as mentioned above more than 75 people accepted Jesus Christ.

The same day as we had a meeting in Amritsar (Punjab) a meeting was held in Shahjahanpur (Uttar Pradesh). This area in Shahjahanpur has never had a gospel meeting before. More than 170+ people attended this meeting and about 70 people accepted Jesus Christ. Our close associate, Pastor Rajkumar ministered to the sick and needy. Food was served to all after the meeting. Pastor Simon Haqq’s church in Delhi continue to have an online service with Shakuntala leading the church and Nishant David preaching the word of God. In June two new families joined the church. Shakuntala and a few other church members led these two families to Jesus Christ. All the members of one of the family were inflicted by the demons. They were all set free from the evil spirits as Shakuntala and our other church members ministered to them.

The daily online prayer meeting started by Pastor Simon Haqq in May 2021 also continues with Shakuntala and Shwetna Yonzon praying daily for all the prayer requests received and for all the sick and needy joining us online.