Christ heals through believers during our May, 2002 Healing Encounter at Holly Cove Retreat near Jasper, Texas…. 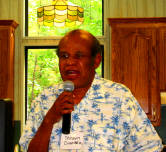 Dr. Salomon, a cardiologist who attends Tallowood Baptist Church in Houston, testifies of his healing at our Healing Encounter. He was suffering from pain in his shoulder and neck which he believed was potentially serious. He sought treatment and medication from a physician colleague, but there was no relief. On Friday night, as others were being prayed over during our Healing Encounter, his pain disappeared completely. Because of his faith in Jesus Christ and the presence of God’s healing power, he was healed!

Wanda, a believer in Christ who along with her husband Bob run Holly Cove Retreat Center, suffered from limited movement and pain in her shoulder due to a torn rotator cuff in her right shoulder. After ministry in the name of Jesus, she was immediately able to freely raise her arm straight up over her head and tuck it behind her back, something she could not do for months! 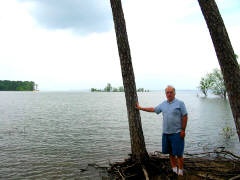