For years, prayer for revival had been lifted up for this Campmeeting on prayer, the largest of its kind in the nation of Burkina Faso. The Lord answered by sending healing fire and water at the 2004 event. 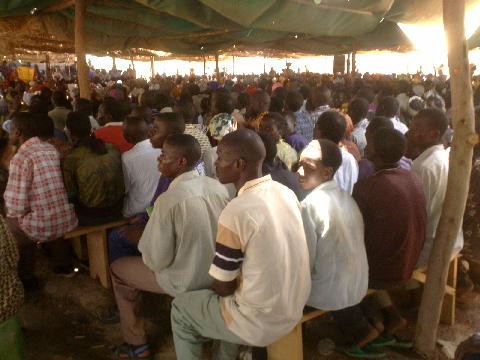 Above: Over three thousand people attended the morning training sessions
Below: Multitudes were healed of infirmites and demon-oppression
as trained pastors ministered to the crowds 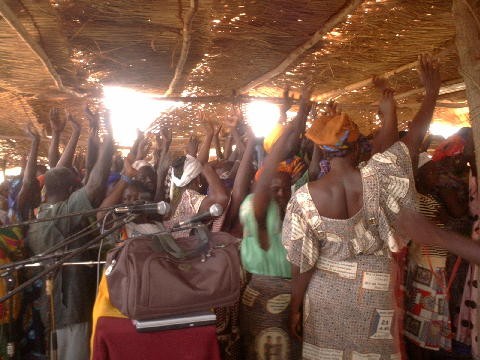 Thousands of leaders and believers gathered at Ramongo for their weeklong annual campmeeting this year. The Elijah Challenge was invited to teach on healing in the morning sessions, while Missionary Steve Parker preached at night. At the end of each session, the trained pastors ministered healing to the infirm. So many people were healed of infirmities and demon-oppression in each meeting (see photo above) that only a small fraction of them could give their testimony publicly. The Elijah Challenge brother writes:

“This morning, I addressed the resurgence of Isl–m in Burkina Faso, which has already claimed over one-half of the nation for the god of Mohammed. I told them that Musl__m oil money coming into the country has bought many converts and built many mosques for Isl–m. But I reminded them of what Peter said: ‘Silver or gold have I not, but what I have I give you. In the name of Jesus Christ, walk!’ I told them that if every pastor and leader simply exercises the authority over disease and demons already given to us, the country can overcome the temptation of Musl__m silver and by won to Christ’s Kingdom. The pastors and leaders received the challenge enthusiastically. Please pray that they will become a mighty army to push back the spirit of Isl–m and take this country for Christ!”

“One of the pastors who attended the training in Ouagadougou is a brother named Emmanuel B. Ouedraogo. He just came to visit me and shared with me some things. For about 5 years, beginning in the late 80’s, he worked with World Horizons alongside British missionaries. Together they worked in itinerant village evangelism here. In 1995, the missionaries went home, leaving behind the sound system and other equipment. This equipment was eventually used by local pastors for their churches. Pastor Emmanuel settled down as a local pastor.

Through the training Pastor Emmanuel was powerfully stirred. The Sunday morning following the training, Pastor Emmanuel discovered 21 people with various infirmities in his service. Some of these people could not even walk. He instructed the well believers in the meeting to lay hands on the sick, and 19 of them were healed. As they continued to minister in Jesus’ name, the remaining two were healed as well.

Ignited red-hot by what he witnessed in his Sunday service, Brother Emmanuel strongly feels the Lord calling him to return to itinerant evangelism. He has a stack of requests from village pastors asking him to hold Crusades in their areas.”

“Thank you, thank you, thank you for standing with us in prayer for the Ramongo camp meetings which concluded Easter morning for the closing ceremony. An estimated 6,000 attended the night sessions, and God worked in extraordinary ways on every level, physical healing, salvation, ministry to the weary souls, and even the weather!

Brother William did training for several hours each morning and by week’s end 2,000 workers were attending. He also led the healing prayer at night after my teaching. He let those who had been trained lay hands on the sick. We saw literally hundreds of instantaneous healings of all kinds from deaf, eyesight, heart disease, derangement, and so on. We had to limit the people giving testimony to 20 people each day because of time, but several times that many could have testified. Of those a half dozen or so were not genuine and asked to sit down but the rest the pastors there knew them and verified as authentic their healings. Please pray for William as he continues this ministry around the world. Moslems especially respond and give their lives to Jesus when they see the miracles.

God gave us a word at the start of the week that He would give “cold water” to those who were weary, from Proverbs 25:25. I took this as spiritual and God seemed to confirm it as people were being refreshed and revived from the Word. Then, despite temperatures above 100 at the peak of dry season, some who were being healed reported feeling cold water pour over them when hands were laid on. This struck us as unusual since often people feel a burning or electricity shoot through them. Even William said he had never heard of this. During the singing the first night a choir member prophesied that he saw a waterfall coming from a mountain and refreshing the people, followed by rain that came down. In the sweltering heat and with almost no water available (campers are not allowed to bathe during the week as the tanker must not be depleted) I was tempted to attribute this vision to the “mirage” factor, as when men fast and dream of hamburgers! Much to our astonishment, this was not only spiritual but natural. A thunderstorm came as I was going to the mike for my final session Saturday night! I tried to teach but people fled and even my interpreter left me alone in the pulpit, then I had to run for it as well and we were all drenched, ending the meeting! We had been saying all week that God was doing the programming but did not expect Him to close the conference early! Talking with a veteran local pastor he said it had never rained on Easter week in his lifetime, as it is the dry season, and rains begin usually in May.

Around 30 or so people committed their lives to the Lord during the week. We had expected even more but realized that the main goal was equipping believers who were the majority of the campers. Some of the Moslems would not come forward in public but came one at a time to the pastors during the breaks in the day time.”

” By the Grace of God, we the Church of Ramongho received The Elijah Challenge into our week of prayer. It took place from April 5-11, 2004.

We have profited from The Elijah Challenge through a teaching on how to perform the miracles of God. About three to four thousand people attended the teaching which took place in the mornings from 9 AM to 12 noon. The teaching was very appreciated by all the participants as well as the pastors who were present. Not only did the teaching give dynamism to the participants, but the central point is that the teaching was drawn directly from the Bible. Because of this, the pastors and the entire assembly strongly appreciated The Elijah Challenge and the teaching. The teaching was supported by prayer over the sick. During this time, many infirm people were healed and many gave their testimonies that the Lord had delivered them from unclean spirits, curses, pain and other infirmities. This was a great awakening.

In the evenings, we brought together about eight to ten thousand people who heard the gospel. There as well the ministry of The Elijah Challenge [and the trained pastors] resulted in the Lord manifesting Himself in miraculous healings.

The teaching was very fruitful and appreciated by the pastors. That which brings even more rejoicing is that the pastors have begun to apply the teaching in their own churches.

Two testimonies from the local Pastor in Ramongho:

‘The following week we organized three days of prayer. A man came from 180 kilometers (110 miles) with his son who had been possessed since January 2004. The boy did not talk, did not eat, and had a fixed stare. When we prayed over the child, he began to speak on the spot. Afterwards he ate and his countenance became normal. He was completed healed.’

‘A Musl__m woman was brought by a Pastor from 120 kilometers (75 miles) away from Ramongho. She was suffering from madness and possessed by demons. Her friends believed that they would have to spend some weeks at Ramongho, so they brought food and wood for cooking. The woman did not sleep at home, day or night. The very day we prayed over her, the demons left her and she was able to sleep very soundly. The next day she went back home. She was healed.’

The miracles continue to be manifest and the teaching continues to change the lives of the people. We bless the Lord to have allowed us to know The Elijah Challenge and to receive the teaching during that week. May the Lord be blessed.”

[This report was translated into English from the original French version given below.]