The journey up the mountain to Tandrang 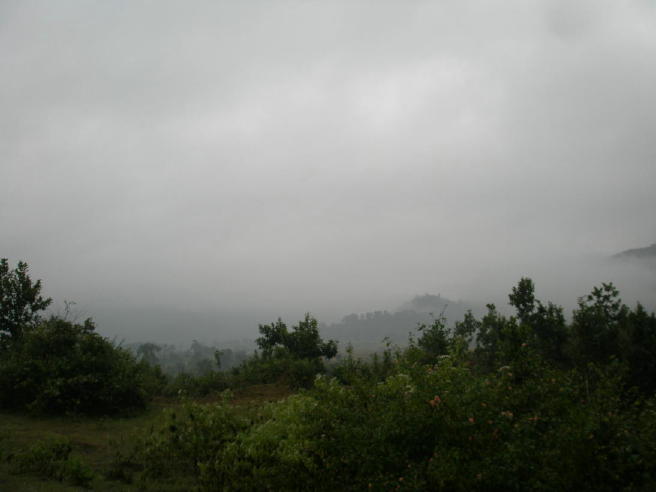 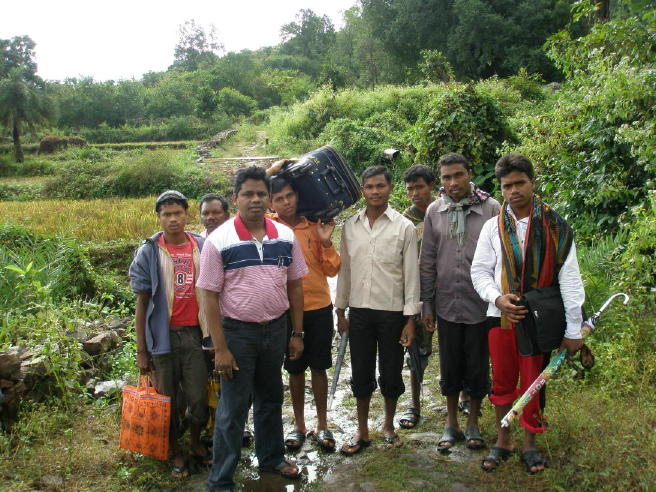 “Our journey to Tandrang was very difficult. We traveled hundreds of kilometers on rough roads. I was told that contractors were afraid to bid on road construction projects in the area because of the presence of Maoist rebels.

Since bus service was not available to Tandrang from 30 kilometers out, they hired a taxi for us. We got as far as the mountain near Tandrang. There were big obstacles for us. Throughout Orissa there was heavy rain from December 5-10, even close to Tandrang. But in Tandrang itself there was no rain on the 8th and 9th. That was the first miracle.

Our taxi could not climb the muddy roads, and so we came back from a nearby village on the night of the 7th. On the morning of the 8th we started our journey again, this time on foot up the mountain for a distance of 15 to 20 kilometers. This took about three and half hours. It was the first time I climbed such a big mountain. 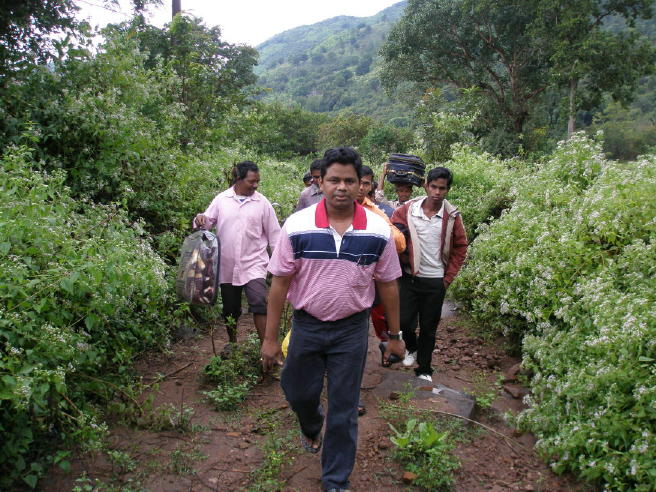 Brother Subodh leading the way up the mountain 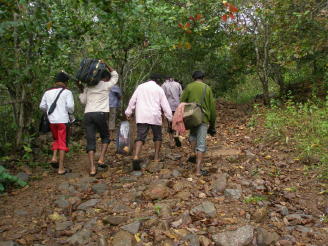 Upon our arrival we received a very warm welcome from the people. I was told that there were sick people who came from different villages, walking from five to seven hours. After hearing that I forgot my pain. 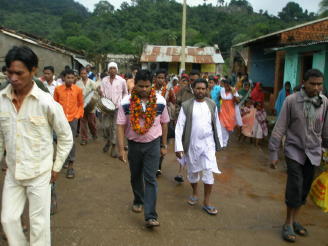 A warm welcome by the villagers

Over a thousand delegates were there and they could not fit in the tent. They expected even more delegates but the rain hindered them. I told the pastor that all the outsiders can be seated first inside and the others can listen from outside. There was no place left out. On the 9th we had the meeting on Baranda Street. 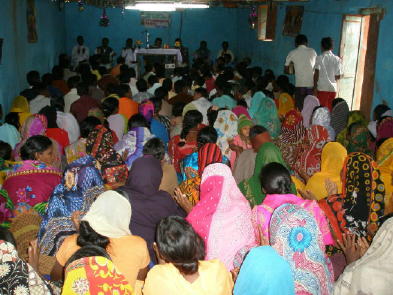 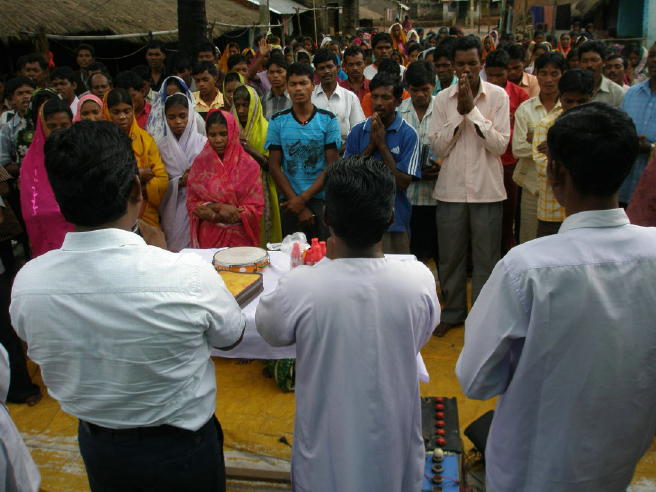 The crowd outside the tent

I thank and praise God for His glorious and gracious work. Now my faith has increased greatly to do more powerful ministry by seeing these miracles of God. This is because of the prayer of the many intercessors such as Sister Christiana Chong in Malaysia and our prayer team. 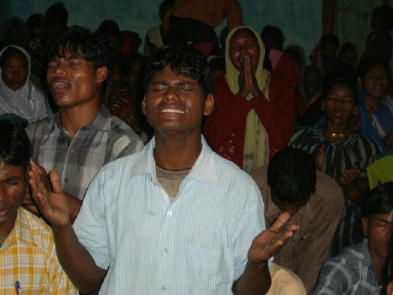 The power of God touched everyone. I saw tears from almost all of them. God performed great and mighty healings; hundreds received the Lord Jesus Christ for the first time in their lives. Many received the power of God by receiving the Holy Spirit (Acts 1:8). It was truly a historic event for me to see those many people coming to Christ. One more memorable thing was that after the gospel message a few confessed their sins to each other and their relationship was restored. The move was so unique. The delegates testified that they had never before experienced such a thing. They confessed that Jesus can heal the sick.

We had no time for testimonies at our last session due to the shortage of time. I simply asked the delegates how many people were healed and received Jesus Christ. I saw so many hands lifted up. Praise God for all of these precious people living in the hills who received healing and accepted the Lord Jesus Christ.

The committee members informed me they had never witnessed this kind of healing. They expected more people but the rain hindered them. The next time 10,000 people may come. Praise the Lord.

The host Pastor Joseph Majhi informed me that they had planned and raised the funds for this program for about one year. By the grace of God people from twenty to twenty-five villages heard the gospel of our Lord Jesus Christ.

If the Lord provides the funds to hold such Crusades three or four times a year, then within a year hundreds of unreached villages can be reached with the Gospel of Lord Jesus Christ and with His mighty power. And surely thousands upon thousands of Hindu souls will be added to His kingdom.

1. Jehuda — this brother could not hear anything in one ear from birth. God touched him and healed him completely. He had been very upset and was saying if my ear will not open than more people will call my wife the deaf man’s wife and it is very painful. He said that he used to cry all the time because of his ear problem. “And now I can hear; God healed me.” 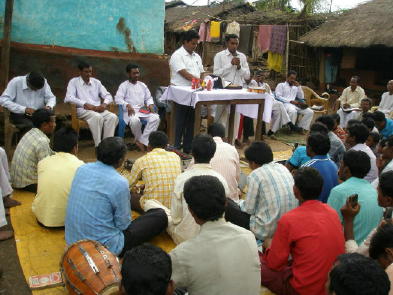 Jehuda testifying behind the podium

2. Karmila — this sister also was deaf. She came from another village for her healing. So wonderful. God did a mighty miracle in the meeting; she was touched and completely healed. 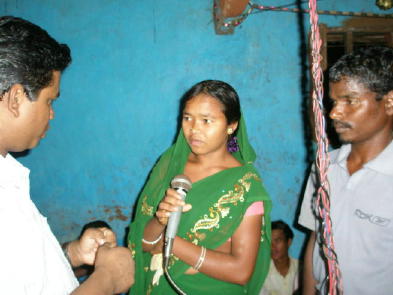 3. Maria — another sister who was also deaf. She was also healed by the spirit of God. 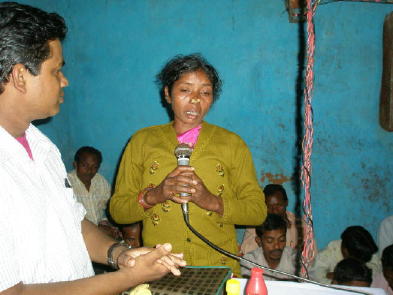 All three of the above were completely healed from the deafness. Now they can hear. Praise the Lord.

4. Anjali — this sister was not able to see anything just like a blind person. She came for healing. She was touched by God and she could see. 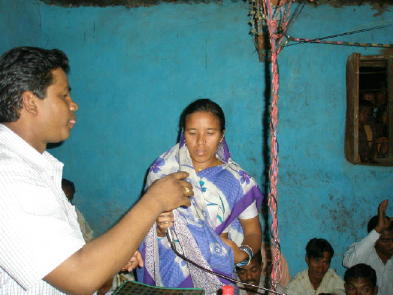 5. Rajani — this blind women was healed and her eyesight was restored. 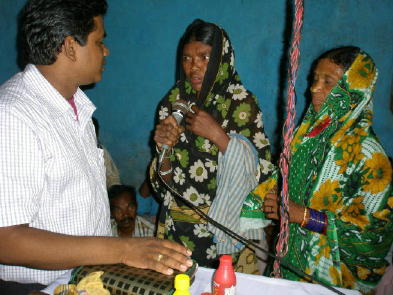 6. Sukanti — this sister was suffering from a high fever. When she came to the meeting her body was shaking uncontrollably and she had a very high temperature. The power of God touched her and her temperature went down. Praise God at that very moment she was healed. 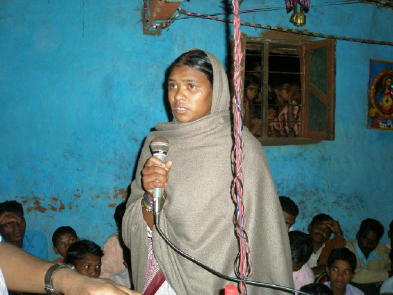 7. Mariama — this sister was suffering from fits (seizures) for a long time. God touched her while I was ministering to the people. There were many people who had suffered from fits for years and years. Though I was not able to receive testimonies, I was told that this disease was healed at the meeting. 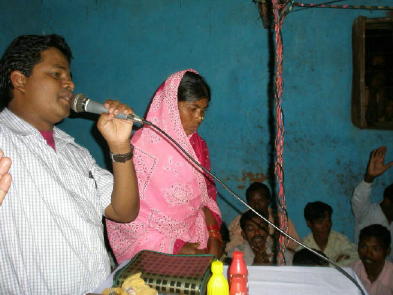 8. Surekha — this sister was suffering from stomach pain for five years. The power of God touched her and she was healed. She testified, “I have gone to many doctors for treatment but still I felt the pain. Today the power of God came and touched me and now I have no more pain.” 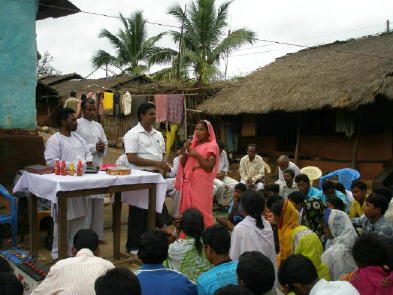 9. Dasinta — she had a headache and was unable to bear the pain when the pain came. She testified that she had faith that when Pastor prays over me I will be completely healed. And she waited for the meeting. God touched her wonderfully as I ministered to her. She believed that God touched her and she was healed. She will be not having any pain in the days ahead.

10. Prabin — this brother had back pain. He was suffering very badly because he was not able to sleep for many days. He had gone to many people to be cured but found no relief. During the meeting he was touched by the spirit of God and was healed completely. 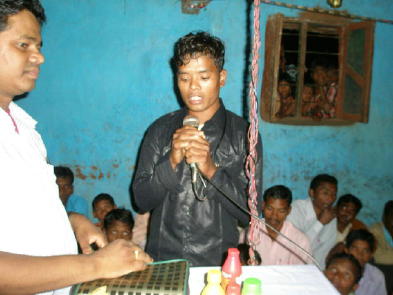 11. Saidrak — this brother had neck pain. Because of the pain he could not straighten his nect for the past two years. He never thought that he would be able to keep his neck straight. But the power of God touched him miraculously and he was healed. At that very moment he was able to straighten his neck properly. 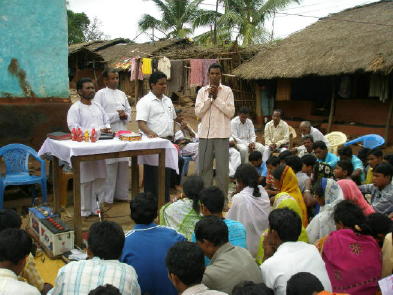 Saidrak testifying before the people

12. Philemon — this brother had an unknown disease. For ten years he didn’t know what was going on. He was not able to sleep, to sit or to walk. He could not even eat properly. He had a severe problem where he was so depressed for his life. Even the doctor could not understand what the problem was. Our God is truly the mighty God who knows everything and heals every disease. For the first time he heard the gospel and came to know God, he was also touched by Him. He came from another village for healing. Praise God that He healed him completely. 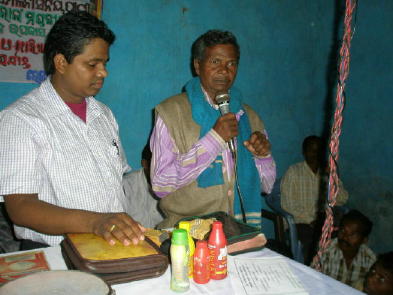 14. Swasdam — this brother was suffering from chest pain and was not able to take a breath. He wanted healing prayer. While I was ministering to the delegates he felt warmness in his body. He testified that the Lord touched him and he was healed. 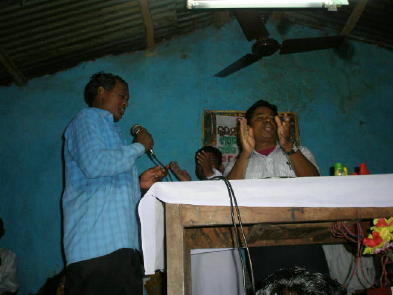 15. Subash Majhi — this brother also had a problem of chest pain for ten years. His doctor advised an operation but he did not have the money. Praise God he came with great expectation and was healed. 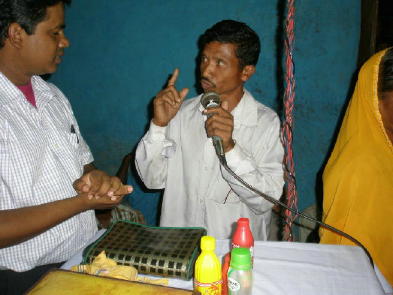 16. Maijhi — this brother is an evangelist. He had a problem in both ears for many years. Usually he hears ringing in his ears and it was disturbing him. He requested me to minister him. Praise God he was healed completely. 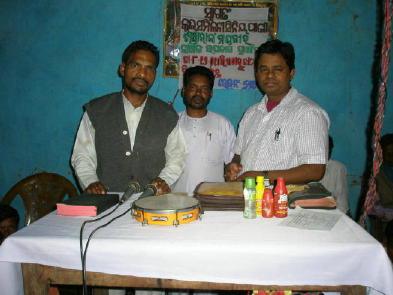 There were many more reports of healing and miracles in our midst. All the glory and honor to God alone.”

Erecting the pendal (tent) for the Crusade 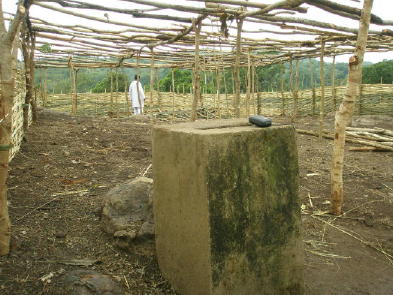 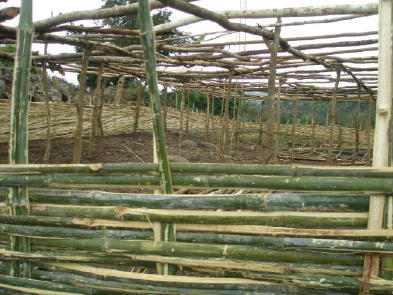 “One of the leaders from Tandrang came and attended the Basic Training we just conducted in Bhwanipatna. He informed me that there were five blind people who received their sight during the Crusade. We did not have an opportunity for their testimonies during the last session.

One more exciting news is there was a mini-Cinema Hall in Tandrang and many youths were badly addicted to it. Today our Crusade host Pastor Joseph informed me that now the Cinema Hall has closed down and all who used to go there are now are coming to Church. There is no more space in the Church to seat everyone.

This is an unbelievable work of God. So many lost souls came to the Lord through the Crusade. Praise God.”

“I am so glad to inform you of a privilege for me to receive a special invitation to preach in the Kui-Baptist Association (Samilani) for their 25th Year Jubilee Celebration. They are going to celebrate their Jubilee on the evening of the 13th of January to the evening of the 14th at Pateiguda, Gajapati, Orissa. The delegates will be over five thousand people from forty villages consisting of believers and non-believers along with many Christian leaders.”