“Healing-at-a-distance” by team members of Egypt 2002 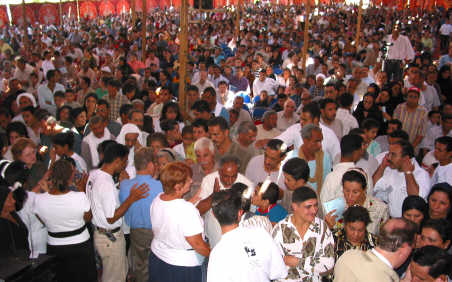 Back to Egypt 2002 Campaign webpage

In mass evangelistic Crusade meetings in Third World countries, the evangelist will sometimes ask Jesus to heal the sick as He did 2,000 years ago when He was on earth in human form. This is done to show God’s compassion to the infirm as well as to demonstrate His great power. Such a demonstration of power is the visible evidence which confirms the message of the gospel to the listeners. Such miracles offer convincing proof to the listeners that Jesus is the Son of God and the only Savior.

When the crowds number in the thousands, the evangelist does not have enough time or strength to lay hands on and pray over each individual person. Instead he or she may minister to the sick through what is called “healing-at-a-distance.” The minister will pray over the entire crowd of sick people at the same time. The Lord will heal whom He wills to heal simultaneously, and people will come forward to testify publicly of their healing. This brings much glory to God before the people.

Jesus Himself ministered healing in such a way in Luke 7 where he healed the servant of the centurion at a distance. According to John 14:12, believers are to do the works that Jesus did.

In our large Tent Crusade meetings in Upper Egypt, I usually ministered in this way. After I ministered healing-at-a-distance in Christ’s name in one particular meeting, people came forward to testify of what the Lord had just done. Among them was a young deaf woman who testified that the Lord had restored her hearing. A middle-aged man with severe back problems came up to the platform to share with great excitement that the Lord had completely and instantly healed his back. On the stage he bent way down several times to touch his toes and straightened up vigorously with absolutely no difficulty, delighting the amazed crowd of thousands. God was greatly glorified in the midst of the Egyptians, who had never before witnessed such things. Later I would hear reports of other people who had been healed at the same time, but did not testify publically.

After the Tent Crusade, our team of sixteen traveled north to Cairo where team members were given the opportunity to minister in individual church meetings. In this setting some of them decided to attempt what they had seen me do in the big Tent meetings. The Lord was very gracious. From oral reports I have heard so far, I’ve gleaned that the Lord used eleven of the other team members to minister healing-at-a-distance to the sick in church meetings. God is restoring His power to his people, and not just a few! This may be training for future mass crusade evangelists to reach the billions of Musl__ms, Hindus, and Buddhists who have not yet heard.

The following is the testimony of Charlotte Chandler, an African-American sister on our Egypt team who is a member of St. John’s Downtown United Methodist Church. This happened on the Sunday after she returned to the United States….

Hello 🙂 I just wanted to tell you that God is continuing His mighty works…..Sunday at church Pastor Rudy Rasmus had me come up and share a little about my trip and the signs and wonders. Afterwards he asked me to minister healing to the congregation. I ministered corporate healing-at-a-distance to the congregation with “MOUNTAIN-MOVING FAITH” without any hesitation. It went forth with a mighty move of God; afterwards he asked people to stand if they were healed and about ten people did stand with two testimonies……God is good!

At the Embaba Giza church there was a lady that stands out in my mind when we ministered healing-at-a-distance. I told everyone who was sick or had pain to stand and to put their hand on the part of their body which was infirm or painful. I then prayed and commanded the pain and sickness to go in Jesus’ Name. And I then asked who felt that the Lord had healed them. There was one lady in the back who looked at me as if I was insane. After she looked at me for a few awkward moments, I asked her if the Lord had healed her. She was surprised because she had had severe pain in her head for a long time and all of a sudden the pain was gone. She came forward and testified what the Lord had done. Praise the Lord! There were a couple of other ladies who also raised their hands but I never had the opportunity to talk with them.

At one of the Peniel churches there was a particular woman who stood out when the Lord healed her body (I do not remember exactly what was wrong with her), but she did not want to accept Christ. But the very next night after the preaching and healing-at-a-distance she came forward toward the end and said she wanted to accept Christ. She was healed one night and the next night accepted Christ. During the healing-at-a-distance there were usually several who would be healed but would get lost in the shuffle of praying for the people.

On several occasions I had the opportunity to minister healing-at-a-distance in Cairo. Each time I ministered someone got healed. It would be something like back pain or arthritis or headache.

I witnessed God heal many people of various infirmities through the laying on of hands and also in ministering healing-at-a-distance.