From Pain to Gain

When a dilapidating disease creeps into your life, what should you do? Can the grace and mercy of God carry you through the pain? Is it possible to ask for divine healing? 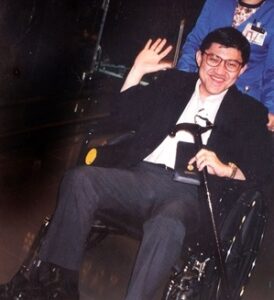 .
Within the period of 10 years, my health condition worsened and slid rapidly down the steep slope of pain. The little known genetic disorder, ankylosing spondylitis, was taking over my life. This is a chronic inflammatory arthritis of the spine, also known as ‘bamboo spine’. It is an inherited autoimmune disease that causes the joints in the spine to fuse up and there is no cure.

I did not realise the seriousness of this disabling disease even though it had caused a hairline crack in my spine when I was only 18 years old. As I grew older, I began to experience regular bouts of back pain and numbness of the limbs.

After passing 40, the pain had increased to a point where it affected the movements of my limbs. My spine had fused up, causing my back to hunch. My health deteriorated further and pain became my regular companion. To manage the pain, I popped ibuprofen, a powerful painkiller. On bad days, I had to take up to eight pills – the maximum dosage permitted in a day.

Standing, walking or sitting, for a prolonged period, became a problem. Before too long, I sought the help of walking aids such a walking stick or cane. I had to use a wheelchair for long distance travels.

There were nights when my back was so painful that sleeping became impossible. I had to lie face down like a turtle over a few stacked layers of pillows.

During every chronic pain attack, I cried to God for help. I had no strength of my own; I could only cling to Him. On many occasions, I had prayed and asked God to either heal or take me home to heaven. He didn’t. Instead, He brought the peace of heaven into my struggling soul. The throbbing pain did not stop but His presence helped me overcome many a tough night.

Later I learned that God was not silent about my pain but set the motion of healing in process. How this happened could only be described as the mercy and grace of God in operation.

It was our dentist, Dr. Thiagan Sinnadurai, a dedicated servant of God who challenged my wife Grace and me to attend a healing seminar organised by his house church. I was not keen to attend because I knew that I did not have the gift of healing. For over 20 years of my ministry, I did not see many successful healing miracles after my prayers. In fact, a few people died after I prayed.

On that hot day of 8 December 2005, Grace drove me to the healing seminar. I was not in the most amiable mood. I had work to do and my nerve was also not accommodating. When we could not find a parking space, I was elated. Now, I could miss the seminar and give a great excuse to Dr. Thiagan. However, God had other plan and He opened up a nice parking space for us. Still mumbling under my breath, with Grace helping me, I walked slowly to the training location at Bangsar.

That day was to become a defining moment of my life and ministry. Pastor William Lau, an American-Chinese, with a gentle Christ-like spirit, was systematic in his teaching. In his Elijah Challenge teaching, there were no strange doctrines or scary testimonies of being caught to heaven. This founder of the Elijah Challenge was not there to impress us with his theology but simply allowing the scriptural verses to speak for themselves.

Verse upon verse, precept upon precept, line upon line, my eyes were opened. Suddenly everything made sense. Why didn’t they teach me this in the bible seminary? Even after earning a Master in Divinity, this truth in the Bible had completely eluded me.

Why was I not told that there is a difference between the gift of healing and the authority to heal? Why didn’t the professors teach us how to use the kingly authority to do spiritual warfare and heal the sick in the context of preaching the Gospel?

The most fascinating part was when Pastor Lau said that he would demonstrate this God-given power and authority by healing some of the participants in the name of Jesus. He did exactly that. A few participants were healed of the back pain, leg pain and other infirmities.

Then he invited some of us to try. I remember feeling the pain in my own back and facing an Indian pastor who claimed to have three numb toes. With a fellow participant, I laid my hand on the toes and commanded the feeling to return in the name of Jesus. To my great surprise, the pastor claimed that feeling had returned to his toes and he quickly testified to the other participants. That was my first experience in having immediate healing result after ministering.

I was to attend the same seminar another three more times and then to take an advance training with Pastor Lau. Since then, my ministry has been completely transformed. It is filled with power and miracles which is line with what the bible says about the kingdom of God as not being a matter of talk but of power (1 Corinthians 4:20).

Grace and I had personally healed many in the name of Jesus with the God-given authority and power. In the last five years, we have trained Christians from both the mainline and Pentecostal/Charismatic churches in seminars and training sessions. We have the joy of seeing our trainees healing the infirm in the name of Jesus and literally thousands are being miraculously healed.

This testimony from one of our many healing mission trips to the Philippines is among the more interesting ones:

The elderly lady sat transfixed as after many years, for the first time, she could clearly hear the voice of her daughter. I had just placed my fingers into the elderly lady’s impaired ears and commanded them to be opened in the name of Jesus. Then to test whether she was really healed, the daughter went to about one metre behind her and began calling out words and phrases in a normal voice. The elderly lady repeated every word and phrase accurately – she was healed and she could hear clearly.

Here is a testimony of distant healing:

Our Chinese Service’s pastor, Rev Edward Chiu’s mother-in-law was in coma after taking the wrong medicine for her tuberculosis. She was in that situation for four days and she lived far away from our church in another state. Rev Chiu and I took authority over the coma by using the healing-at-a-distance approach. We commanded her body to respond to the healing touch of Jesus and also for her to be revived from her coma. About two hours later, the sister-in-law discovered that the mother had awakened. Praise the Lord! Now we know that healing-at-a-distance works also with us.

Some of those trained pastors have gone on to include The Elijah Challenge’s approach of healing in their ministries. Rev Timothy Lam is one of those trained and recently ministered in Guilin, China. His testimony came this way:

An elderly man who could not speak for many years, started to utter words after being ministered to. His wife wanted to hear him say, “I love you”… and he did. Slowly but surely, he said those lovely words to his wife after many years of dumbness. [In Chinese, the words would sound like “wo ai ni.”]

This type of scenario is repeating in many congregations around the world. From Vietnam to Africa, Singapore to Dubai, Malaysia to United Kingdom, India to United States, thousands have been healed in the name of Jesus. What is so special about this type of healing ministries? If you like to learn more, Grace and I are most willing to share with you and your congregation. Today we serve as coordinators of the Elijah Challenge Asia and our primary task is teaching congregations how to heal in the name of Jesus within the context of evangelism.

What happened to my own dilapidating condition? Without much fanfare, I was miraculously healed. While I was busy healing others in the name of Jesus, God was quietly healing me. One day, I got up without pain. For a short period of time, I still carried my walking stick just in case it was only a brief remission. After a while, it seemed silly to carry the walking stick when there was no pain and so I left it at home.

There were many occasions when the pain threatened to return but my dear wife was ever ready to rebuke the pain for me. Today, after five years, the pain recurrence has reduced to almost zero. I still have to be careful not to lift heavy stuffs or jump off the stage while preaching. The Lord is merciful and Grace and I are forever grateful.

About Pastor Albert Kang and His Ministries

Today, Albert serves as the Lead Pastor of FaithLine International Ministries and the Pastoral Advisor of Overcomers Church in Perth, Australia. He also serves as one of the Directors on the Executive Board of Foursquare Malaysia and Foursquare Singapore. Since 2006, Albert has served as the Coordinator of Elijah Challenge Asia and he is also the Founder and Director of Healing Encounter Ministry (HEM). With his wife, Pastor Grace Kang, he conducts ‘The Elijah Challenge End-Time Model of Evangelism’ and HEM Healing Seminars locally and internationally.