The Seminar & Evangelistic Crusade in Malaysia were successful through the Lord’s abundant grace. For us the meetings were especially significant because the Lord’s hand was so very evident from the very beginning. He used Brothers David Tan and Thiagan Sinnadurai (both of whom are “tentmakers” without any experience in hosting meetings of this sort) to bring together 120 nameless and faceless pastors and leaders. These came together from well over twenty churches and organizations to work together in a spirit of unity…they had not known one another prior to the meetings. Overnight, a new “body of believers” from different parts of the city sprang up to work together in love. 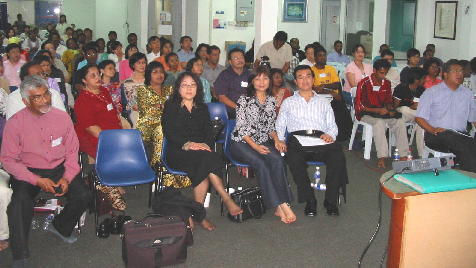 Some of the 120 disciples

The auditorium was mostly full, and I preached the gospel of Jesus Christ according to Isaiah 53:4-5. Christ’s authority to heal disease two thousand years ago proved that he had authority to forgive sin and to save from punishment in hell. After the message we prayed to the Father in the name of Jesus to heal the sick to prove that He had indeed sent His Son to die on the cross to bear our sins. I asked the servants of God trained in the Seminar to come forward, followed by the infirm. The servants of God laid hands on them and exercised their authority in Christ, rebuking the diseases as Jesus did two thousand years. Soon people who had been healed climbed up to the platform to testify. A line of grateful people formed, and there were many testimonies of people who had been healed. Some wept, some jumped up and down with upraised hands unto the Lord who had healed them. Those who had been healed of infirmities in their legs walked up and down the stairs to the platform to show that they were completely healed.

Perhaps the most memorable testimony was from an emaciated middle-aged woman who had come in a wheelchair suffering from severe pain in her body, especially her hip, because of advanced bone cancer. She was able to get up out of her wheelchair and walk on her own. She climbed up to the platform to testify quite movingly that there was no more pain, giving thanks to her Lord (see the picture below). Also a woman who was totally blind began to see color. 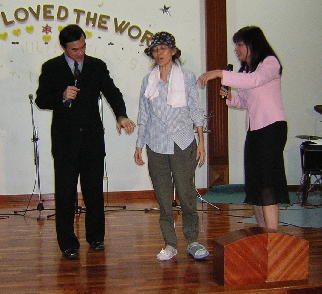 Woman with advanced cancer
climbs up to platform and testifies

I gave the call to accept Christ as Lord and Savior, and precious souls responded. Their sins were completely forgiven, and they entered the Kingdom of God.

The believers rejoiced greatly. This was not a one-man-show by a renowned evangelist, but rather a demonstration of the Lord’s promise to use every believer to do the works that Jesus did. They rejoiced not only because of the miracles, but because the Lord had graciously used them to do them.

During the second and final Evangelistic Rally at the spacious hall of St. Peter’s Anglican Church in Kuala Lumpur, the leaders trained in the Seminar again ministered to the infirm with power and boldness. The Lord used them to perform miraculous healings to prove that Jesus Christ is indeed the only way to the Father (John 14:11-12). Those who were healed marched up to the stage to testify that they had been healed through the name of Jesus. Among those healed were some Hindu people. When we gave the altar call to follow Jesus, these precious Hindus came forward along with others. They had heard the gospel and experienced the confirming miracles. It was a time of rejoicing for the Lord’s servants who love the Lord and serve Him so fervently…they have witnessed the restoration of end time evangelism to the Church.

We heard that some pastors who were trained are already planning to hold their own evangelistic Crusade in another part of town.

A dear pastor who attended the meetings wrote…

“…[the following Sunday at our morning service] I called for people who desired to be healed of diseases to come forward. About 5 people walked down. I noticed an elderly lady and her daughter came along with them. They were new visitors in our church. The adult daughter was helping her mother describe to the altar workers about the pain in her leg, side and arms. Other altar workers were also attending to the other four – one of them was a young child.

As you have taught me, I took authority over all the diseases by commanding them to go in the name of Jesus. I also asked the workers and congregation to repeat after me loudly. Honestly, I was a little hesitant inside but I put on a brave front and kept up with my exercise of mountain-moving faith. After the whole event, I dared not ask the people to testify. What if they were not healed?

Suddenly the elderly lady was waving her hands furiously and bending her knees. Her adult daughter was clapping and smiling from cheek to cheek. I asked Grace to verify the healing and managed to get the lady up onstage to testify. Praise God… in spite of my “hesitant” faith, this lady was visibly and gloriously healed. God is so merciful and knew how new I was with this kind of approach…The people were so excited about this new healing method that some of them asked me to do this every week.”

“…[the following Wednesday evening] we completed our first training session at my home. There were 13 of us. We had the LCD projector on and so we went through the first part of your Powerpoint Training file. …The feedback from these brothers and sisters was very positive. They were very thrilled by the newfound authority over diseases and demons. This coming Sunday, we will have a little practice in our Chinese service. We are trusting God to use us mightily in touching lives for Jesus.” 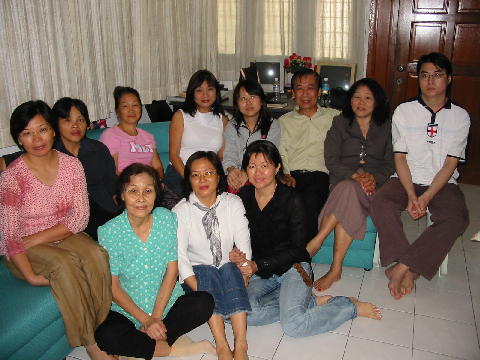 Our dear intercessors in Malaysia

The pastors, leaders, and believers here have received the word of God with great enthusiasm and glad hearts. It is “new” for them, powerful and according to Holy Scripture. The Lord has given us the grace not to inject our own human wisdom or opinion into the teaching, but to rely heavily on Scripture. According to the participants in the Seminar we held in Indonesia the week before at the end of November, the teaching is “pure.”

In one of Lucy’s Mandarin Chinese sessions, a woman with a growth on her arm came forward for ministry. The trained believers laid hands on her, and the growth began to shrink. She was able to lift her arm in a way that she could not before. The believers learned very quickly. In Lucy’s third and final session, even some of those who came for the first time were used by the Lord to heal the infirm as they exercised their authority in Christ.

In our first Evangelistic Healing Crusade we witnessed an exciting and sweet victory from the Lord over the kingdom of darkness. We preached the gospel from Isaiah 53:4-5 and asked the Lord to confirm it through miraculous healings through the trained believers; Lucy translated into Mandarin Chinese. Many miracles took place as the believers exercised their authority over diseases and demons in Christ. Among the more memorable…

A boy born with a hole in his heart could no longer hear the telltale “swishing” sound of his heartbeat. A woman had come to the meeting with a large hard cancerous tumor in her stomach and pain in different parts of her body because of the tumor and the chemotherapy. Through tears of joy she testified that her stomach had become soft and all the pain had disappeared. A woman had come with several growths in her breast and because of them, debilitating fear. She could no longer find any of the growths and her fear had vanished in the name of Christ.

Christ’s authority to free the people from the prison of infirmity proved that he also had the legal authority to forgive the sin that had put them in prison. When I gave the invitation for people to receive the forgiveness of sins and deliverance from punishment in hell by following Jesus Christ, a handful of precious souls responded. It was most glorious. The saints rejoiced at what they have seen the Lord do through them.

In our second Evangelistic Healing Crusade, I preached the gospel from John 14:6. To prove that he was the only way to the Father, Jesus did many miraculous signs two thousand years ago according to John 14:11. We asked him to do it again—to prove to everyone in attendance that he was indeed the only way to heaven through his atoning death on the cross by healing the sick through his disciples.

Some nominal Christians in this area still worship the spirits of the dead along with Jesus Christ. They believe that worshipping these spirits will also bring them blessing and “salvation.” I told them that the miraculous healings they would in a moment witness would prove that they had to repent of worshipping the spirits and to worship and believe on Jesus Christ alone.

The trained believers came forward and ministered to the infirm in Christ’s name. The struggle with the infirmities and demons was brief and victory came quickly to the forces of the Kingdom. Very soon people were coming up to the platform one-by-one to testify of their healings through Christ Jesus. It was quite glorious.

Then I gave the altar call to believe on Jesus Christ ALONE as their Savior. Precious souls repented of their idolatry and worship of the spirits of the dead. A group of people, all Filipinos who had immigrated to Malaysia, assembled at the front to receive Christ Lord and Savior. One woman testified that during the mass healing the ringing in her ears that had caused partial deafness had vanished and she could hear clearly. Ladies in the back, mostly Filipinos, wept as they worshipped the Lord with upraised arms. Several who had been healed were Filipinos.