“There is a Hindu man named Dharmendra Singh from Haryana near Delhi. He is a very good business man. Dharmendra was married to a Christian girl (a police constable with the Church of North India) from Bhawanipatna, Orissa where we live. Dharmendra’s family and all the relatives are Hindus living in Haryana.

When Dharmendra’s business developed day by day, his relatives became jealous of his success. They hired magicians to afflict him from time to time both physically and mentally. When the suffering increased they took him to many doctors, but they could not help him either physically or mentally.

Last week his wife his brought him to Bhawanipatna and called me on Friday evening to minister to him. I went there with one of our evangelists and ministered to him yesterday and today again we went to minister him. Praise God we have seen changes in him.

Please pray for him so that he may be delivered from the demonic attacks completely. This will be a great testimony in the region of Haryana and Delhi. Through this miracle the entire family will come to the Lord Jesus Christ.”

“Thank you so much for praying for us and especially for Dharmendra Singh. Almighty God has delivered him completely.

His father and mother are also here in Bhawanipatna. They are from the JAT caste which is known to be high caste in Haryana and Punjab. You might have heard about this group of people living in Delhi, Haryana, Uttar Pradesh and in Punjab State. They told me that they do not know any Christians there and in fact have never heard of the term “Christian.”

They said that all the people in their village had lost hope for Dharmendra. They thought that he could not be healed anymore because he had already suffered for five years from the curse. But our Awesome God the Almighty has done a wonderful thing for him.

Now they want and are requesting me to go their village to remove all the Hindu idols which they kept in their home and other such items used in worshipping them. Praise the Lord!”

“Some very good news is that for the first time I am going to teach the Elijah Challenge Basic training to the women. The reason for this is a few days back there was some (pagan) prayer involving ten to twelve women. Among them was Dharmendra’s mother who was a worshiper of the Hindu god Kali. She used to attend the prayer for her son’s healing. But after Dharmendra was touched by God, his mother was possessed by the demon spirit Kali. One day during the prayer she started to shout and do all kinds of unusual things. The women were afraid and immediately called me on the phone.

I went there and rebuked the demon spirit in Jesus’ name and immediately Kali left her. From that time onwards Kali stopped coming to disturb her. The entire family has accepted the Christ as their personal savior.” 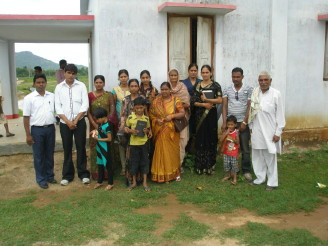 The whole family has come to Jesus Christ