At this Training the Lord’s grace was evident. Nearly twice as many people came as had registered. The Lord confirmed the teaching through various miraculous healings as the believers ministered. There was much rejoicing as the saints witnessed miracles done by exercising authority over disease in Christ’s name.

In attendance was Pastor John Fagg of Hope Community Evangelical Church in Houston. One of the people touched by the Lord in the Training was a sister from Pastor John’s church named Sharon who had been brought by her husband Troy. She had just been diagnosed by her doctor with metastatic melanoma (cancer) in her brain that had spread throughout her body. Her doctor gave her six months to live. She sat through the Seminar in the front row looking weak and frail. At the end of the meeting several believers, including missionary Donna Elms, laid hands on her. After they were done, Sharon looked completely different. Her countenance was beaming and she felt wonderful. Troy and Sharon and others at the Seminar had supper together afterwards at a restaurant and the others marveled at how perfectly fine she looked. 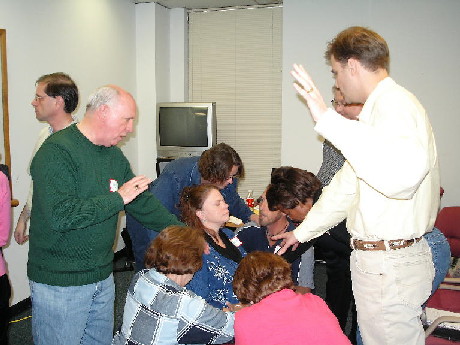 Believers minister to Sharon (center) with John Fagg at left

The next morning at Pastor John’s Sunday Service his message had to do with what he heard at the Seminar yesterday. He said that believers have been given a talent—the authority to heal the sick and cast out demons for the preaching of the gospel to the lost. He added that no longer would Hope Community Church bury this talent in the ground because of fear. He did not want to face the prospect of standing before the Lord someday and hearing the words, “You wicked and slothful servant….” They are going to begin to use this talent to share the gospel of Jesus Christ. Sharon was present in the service. Before the congregation he asked Sharon how she was, and she said that she felt great.

After the Service there was a meeting for new members with Pastor John. Sharon and her husband Troy were there, as well as another woman who had respiratory problems as well as stuffed up ears. The three of them, including Sharon, laid hands on her and exercised their authority over the infirmity in Christ’s name. Afterwards she was able to walk up and down the church stairs with no difficulty in breathing and her ears popped open.

On Monday morning Troy laid hands on Sharon and rebuked any remaining infirmity. Sharon was asleep, so Troy spoke quietly but firmly. She woke up about five minutes later because she could feel power like electricity running through her body. Sharon felt it start in her feet and travel to her head. She said it was [God’s] power flowing through her.

Regarding the medical confirmation that the Lord had touched Sharon, Troy wrote three weeks later:

“Last Friday Sharon went to have a new MRI done so the doctors could compare them to the old MRI… Finally on Wednesday they came in and according to the doctors, over the last six weeks the cancer has not changed at all. THANK YOU JESUS, THANK YOU JESUS, PRAISE YOUR HOLY NAME.” (The old MRI was taken about three weeks before Sharon and Troy attended the Seminar.)

Through the laying of hands of the believers, the Lord not only arrested but began to reverse the advance of the cancer in Sharon. 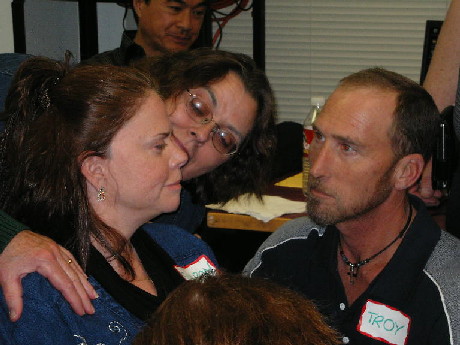 Sharon (left) and Troy with missionary Donna Elms at Seminar

Some comments from the Training participants:

“I had a wonderful time yesterday and thank you so very much for your teaching. It is powerful and clear. It has changed my life. And from this moment forward I will pray this way for healing. I have led a prayer team with healing and deliverance before…with some powerful prayer warriors. However, your teaching provided me the clarity I personally was missing. I was also very excited to be used in healing during our real-life training. It increased my mountain-moving faith.”

“You get an A+ for your presentation, truly the Lord was there and nobody who attended will ever be the same.”

“Thank you so much for equipping the saints in such a way that makes a great impact for God for believers and non-believers as well.”

“I came home from your meeting elated yesterday. Certainly, your teaching on healing evangelism is the best I have ever heard.” (from a missionary to China/Tibet)