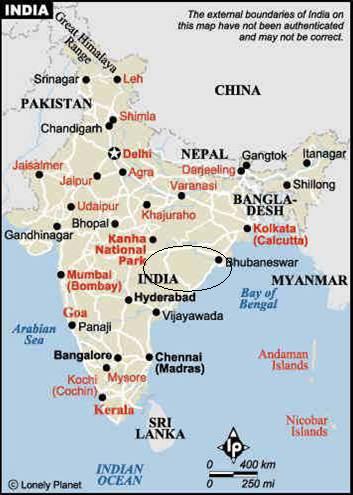 State of Orissa along India’s east coast is encircled 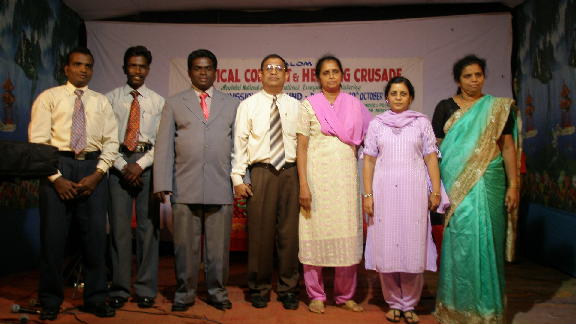 Orissa is a very poor, Hindu-dominated state. Pastor John Thomas, an American citizen originally from South India, founded and oversees Shalom Ministries which organized and hosted the event. On the first day in the town of Rayagada there was a brief introductory morning session followed by an afternoon session. That same evening we started the open-air Evangelistic Healing Services for the public where the gospel was preached and the infirm were healed. For the servants of God who had just received but a couple hours of the teaching—and that with translation into the local Oriya dialect—it was either sink or swim. The Lord was extremely gracious, and he enabled them to swim.

There was much excitement as Jesus healed many infirm people through His servants through the laying on of their hands. Those who were healed came up to the platform to testify what the Lord had done for them. Among the testimonies were blind eyes being opened.

The conditions were difficult with the daytime Equipping Seminar being held outside in the same place as the evening Crusade. The difficulty came with using an LCD projector to teach outside in the daylight. But our translator, Pastor Subodh K. Jena, was excellent. 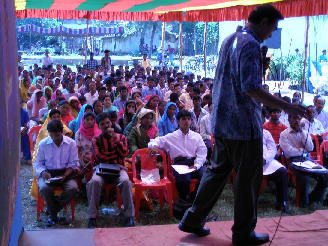 At the second evening of the Healing Crusade attended by perhaps 2,500 people, many were healed as the believers exercised their authority given by the Lord. See the photos below. 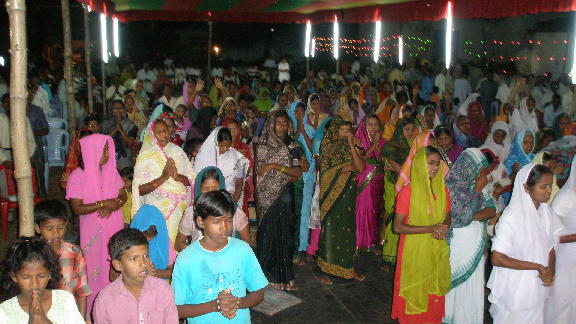 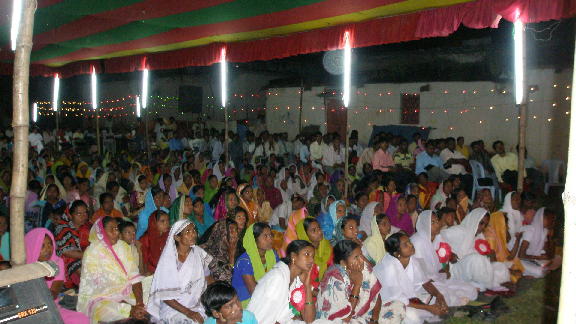 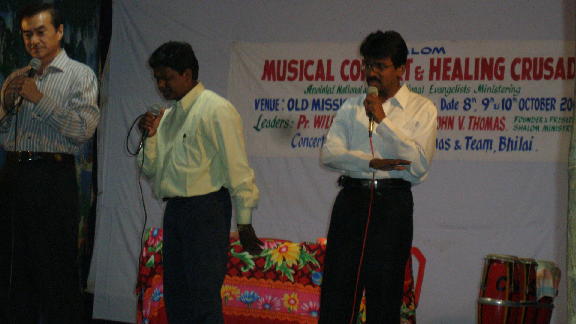 Two interpreters: one for the Oriya dialect and another for the Telugu dialect 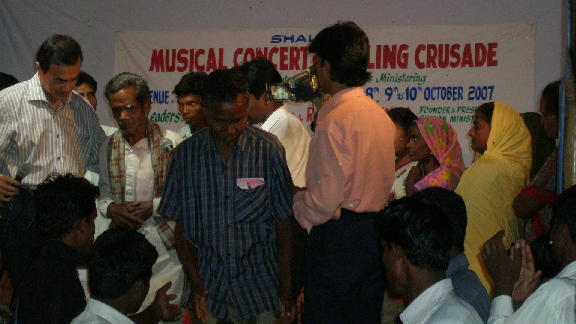 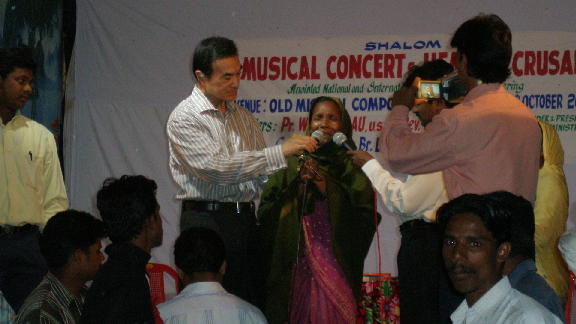 Woman testifies through tears that Jesus has healed her 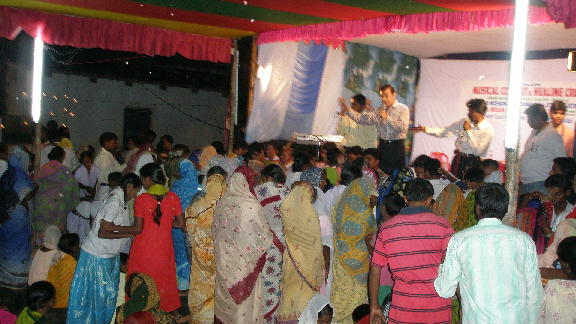 After the healing-at-a-distance: the individual laying on of hands by trained servants of God which resulted in still more miraculous healings 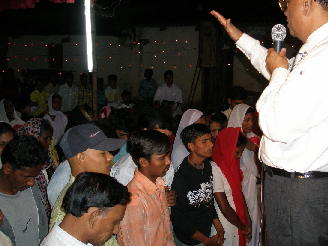 On the third night of the Crusade, I excused myself and Pastor John Thomas led the meeting where an estimated 300 people out of 3,000 in attendance decided to follow Jesus Christ as Lord and Savior. This harvest was likely related to the signs and wonders they had seen and heard about on the first two evenings of the Crusade.

In Bhawanipatna, our second venue in Orissa, we held a similar event where we equipped the servants of God. The equipping was held in a local branch of the mainline Church of North India (CNI). One Hindu man who had suffered from a heart condition that had led to a stroke came to the training sessions. He showed us the official diagnosis from his doctor. But when one of the servants of God laid hands on him during the demonstration, his heart immediately felt much better and he promptly accepted Jesus Christ as he testified about what the Lord had done for him.

Both charismatic/pentecostal as well as evangelical servants of God attended the training.

Isaiah 53:4-5 Surely he took up our infirmities and carried our sorrows, but we considered him stricken by God, smitten by Him, and afflicted. But he was pierced for our transgressions, he was crushed for our iniquities, and the punishment that brought us peace was upon him; and by his stripes we are healed.

Jesus’ power to heal our infirmities—which are ultimately a consequence of sin—came from his death on the cross where he bore and removed our sins. The testimonies of the people whom the Lord had healed demonstrated to all that He had authority to forgive our sin through his atoning death on the cross.

In our absence, Pastor John Thomas led the Healing Crusade at the third Orissa State venue called Kesinga. The Lord continued His glorious work of healing the infirm that evening through the trained servants of God without us present. All who came forward—as many as twenty people—testified that the Lord had healed them. See the photos below. 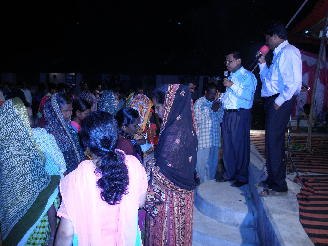 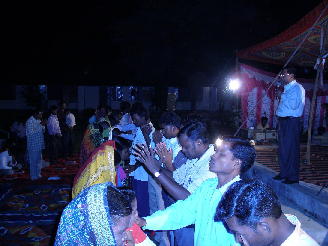 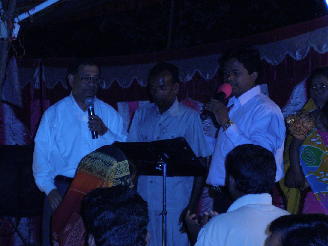 One of many testimonies of healing in Kesinga

The equipping in Orissa was effective. The servants of God trained are serious about obeying Jesus’ command to heal the sick as they proclaim the kingdom of God to the lost. In particular, Pastor John Thomas’ second-in-command Pastor Subodh, who did most of the interpreting for us into the local dialect of Oriya, is determined to continue the work of teaching and equipping the saints with The Elijah Challenge End Time Model of Evangelism.

Received from Pastor Subodh on November 13, 2007

“I am very much grateful for your good advice and wonderful teaching which I could able to practice it and use it powerfully in my ministry… Nowadays our ministry is going on a very special way. Many miracles are taking place in these days. We are visiting almost all the places of this dry land (Kalahandi District). Hoping for the success of our ambition to cover all the enriched generation through your pattern. Please pray for this matter earnestly.

Let me briefly highlight to you about the land of Orissa. Orissa is known as a soul of India. It is a second tribal state in India. Bhubaneswar (Orissa’s capital) is the temple city of India. You might have heard about the Puri city where the Hindu God Jaganath has originated. The Christian population is only 1%. And most Christians are Roman Catholic, CNI and Lutheran. In other side persecution is out standing. Few years ago an Australian missionary Dr Graham stain and his two minor sons were burnt alive. Father Arul Das has killed by Fanatic Hindu group. In this way persecution very much strong. When we look in another side the Orissa is known as the poorest state of India.

I think you know much about the Orissa especially about the Kalahandi district. It is a vast Hindu denomination area. We can’t preach or can’t do the ministry in public but simply God uses us for the extension of His kingdom. This is what the main obstacle for our ministry and also the problem of the RSS people who always opposing to the Christianity same way they are keeping on their target to the pastors and to the leaders.”

Received from Pastor Subodh on December 5, 2007

“Our ministry is going on well; we are little bit in tired scheduled because now we are preparing for Christmas program and other programs too. At the same time we much concentrate on our ministry. Miracles are taking place in every month in our fields. And so many people know the Lord very intimately. Many are willing to take water baptism so I may conduct the baptism program in the New Year.”

“You might have not known about the Phulbani District of Orissa’s Christian people. The big fight with the Hindu RSS people. It was 24th December and people were preparing for Christmas and they had decorated for the program. A few Hindu people came and broke the things. It turned into a dangerous problem meanwhile the RSS leader visited. The Hindus attacked not only that, they have burnt so many villages and vehicles. One hundred and fifty churches were destroyed. A few pastors were killed and more then twenty Christians killed by the fanatic Hindu RSS.

People are not able to stay because they are still persecuting. They scattered to other places to save their lives from this situation. Moreover they have attacked other districts also. In every place things are moving in unexpected ways. No one is able to get there even for relief work because the problem is not yet solved.

Here in Bhawaniptna as well the situation is not favorable. They have already started to attack. Please continue to hold us in your prayers for this particular situation.”