The Elijah Challenge in Australia

The Elijah Challenge team of four believers held Seminars and Crusades in five cities hosted primarily by evangelical (non-charismatic) Vietnamese churches as well as some Australian churches. The Lord was very gracious and the results were unprecedented. Trained evangelical leaders and believers laid hands on the sick at the Crusades, and many were healed in Christ’s name. In Brisbane, Melbourne, and Adelaide non-believers including Buddhists came to the meetings in numbers never before seen at an evangelistic Crusade. Usually nearly all who come to such Crusades are already believers in Christ. But in Brisbane and Adelaide the non-believers were reported to be as high as 90% of those in attendance. After William proclaimed the Kingdom of God, the Lord demonstrated the absolute truth of the gospel by healing the sick through the trained believers. In two cases—one suffering from a stroke and the other from multiple sclerosis—people were able to get up out of their wheelchairs and walk after years of severe disability. When William gave the invitation to follow Jesus, the people came forward in numbers never before seen, particularly in Brisbane, Melbourne, and Adelaide. Since they are now trained, the local churches will continue to proclaim the gospel in this way for the fulfillment of the Great Commission to the Vietnamese people in Australia. 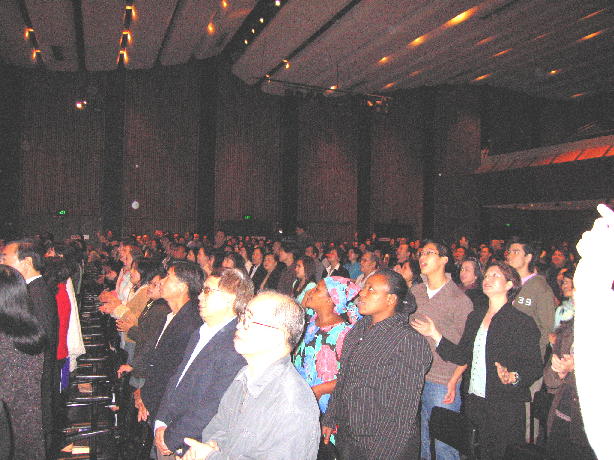 In William’s final Crusade meeting in Adelaide he ministered at Good Shepherd Lutheran Church, perhaps the largest Australian Lutheran Church in the state of South Australia. Eight-hundred or more people from different churches in the area filled the sanctuary. Afterwards, Senior Pastor Peter Steicke wrote, “there are many good reports coming through of the rally here at Good Shepherd. Quite a number of people have experienced healing and renewal in their faith. It has been very exciting to hear of these around the place.” In the aftermath of this meeting, William is being invited to return to Adelaide next year to hold a city-wide Seminar and Crusade for the area Australian churches under the auspices of the large Clovercrest Baptist Church.

For daily reports on what happened during this trip, click on the pages below.

Hindu man miraculously healed from incurable kidney failure, accepts Jesus Christ
Doctor and sorcerer unable to help woman mute for a year due to demonic attack. BUT Jesus...!
High caste Hindu man was about to have his leg amputated due to bone tuberculosis. BUT Jesus....!
Painful tumor disappears from Hindu woman's stomach...she and husband accept Jesus Christ.
Pages: 1 2 3 4 5 6 7 8 9 10 11