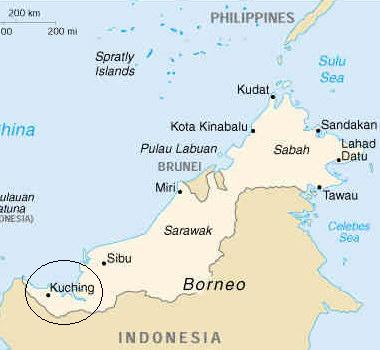 Kuching (encircled) is in the state of Sarawak, East Malaysia (Peninsular Malaysia not shown)

Tucked into a corner of the state of Sarawak in East Malaysia, the beautiful city of Kuching is known affectionately as “Cat City.” (Kuching means “cat” in the Malaysian language.) Legend has it that when a British explorer named James Brooks entered the area centuries ago he wanted to ask the indigenous Dayaks what was the name of the town where he was standing. Brooks did not speak their language so he pointed down at the ground hoping to get the name of the area from the locals. There happened to be a cat at his feet where he pointed…we leave you to guess the rest of the story. 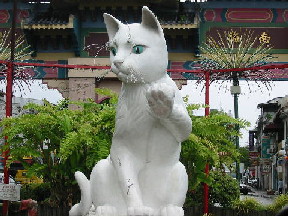 Kuching is known as “Cat City”

Unlike Peninsular Malaysia which is dominated by Isl–m, Sarawak is 42% Christian, at least in name. This is due to the missionaries from the west who labored to introduce Christianity to the Dayaks in Borneo. Thus the primary mission field here in Sarawak is not the Malay Musl__ms, as is the case in Peninsular Malaysia. Here in East Malaysia the majority belongs to the indigenous people of Borneo, the Dayak tribe. This big tribe is further subdivided into many distinct sub-groups each with their own identity. Those which have not yet been “christianized” are still animists. After the Dayaks come the Chinese, who are mostly Buddhists and ancestor-worshipers. There is no problem evangelizing the Dayaks and the Chinese here in Sarawak and in the neighboring state of Sabah, where the spiritual climate is less oppressive than elsewhere in Malaysia. The reason is that the Malays are the minority here. The animistic tribes are not difficult to reach when one preaches the gospel to them and heals the sick in Christ’s name. In June 2007 The Elijah Challenge made its initial trip to Kuching to help equip the Church to fulfill the Great Commission. 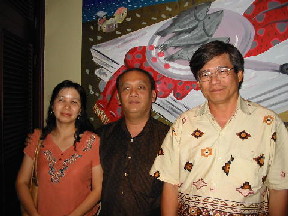 Our hosts were Pastors David Kueh and David Cheng of Emmanuel Baptist Church, a vibrant end time church with impact in the city. The three equipping sessions—held separately in both English and Mandarin Chinese—witnessed about 200 people in attendance initially with more people coming each evening. The more recent believers in the Mandarin Chinese group were especially enthusiastic and the miraculous healings in the training sessions were numerous. 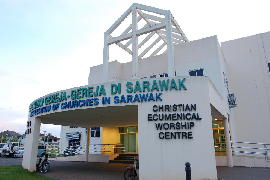 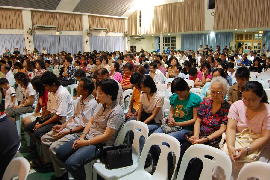 Above & below: the Evangelistic Rallies 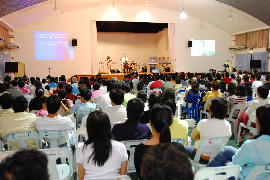 At the first Evangelistic Healing Rally in the ACS Building, the gospel was preached in English with a Mandarin Chinese translation, and the saints healed the sick afterwards in Jesus’ name. About thirty people or more went up to the platform to testify that they had been healed by the Lord Jesus. The miracles proved that Jesus has authority to forgive sin and save from condemnation.

Mark 2:10 But that you may know that the Son of Man has authority on earth to forgive sins….” He said to the paralytic, 11 “I tell you, get up, take your mat and go home.” 12 He got up, took his mat and walked out in full view of them all. This amazed everyone and they praised God, saying, “We have never seen anything like this!”

When we challenged people to follow Jesus Christ, about 13 people—including one whole family—made the decision. The saints rejoiced and danced at the marvelous thing the Lord had done through them. It was a big step forward in their being equipped to do the works that Jesus did. See the photos below. 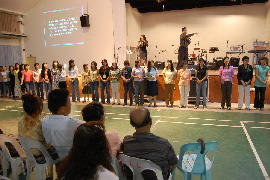 The trained disciples of Christ prepare for war… 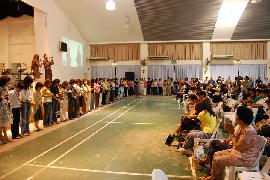 …healing the sick to prove that Jesus is Lord and Savior 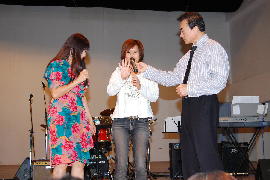 Audrey K. is the first to testify o
how the Lord healed her 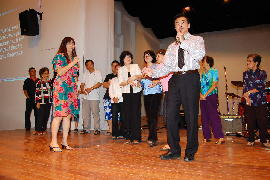 Woman in white jacket (center)
testified of her unusual healing

A believer who came from the distant town of Kapit suffered from a chronic arthritic-like condition in her fingers. (See photo above.) Every morning she would have to pry open her painful and stiff fingers. She also had a growth the size of a marble at the base of one of her fingers. During the mass healing on the first evening she felt the presence and the power of the Lord come upon her, beginning in her head and spreading downwards into her fingers. The lump disappeared as well as the pain and did not return.

Above: People (front row) come forward
to follow Jesus Christ after hearing
the testimonies of His power to heal 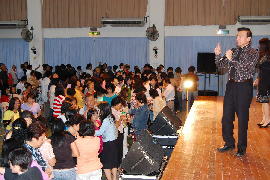 Above & below: trained disciples
ministering to the infirm 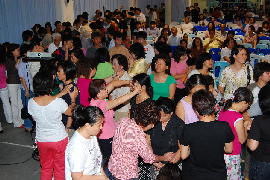 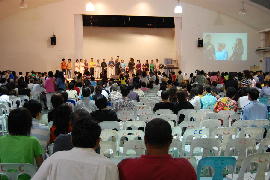 Above & below: those who are healed
go up to the stage to testify 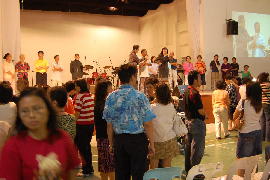 During the time of ministry, many infirm came forward and were healed as the disciples exercised their authority in the name of the Lord. The line of people who testified of what the Lord Jesus had done for them stretched from one end of the stage to the other. His name was exalted and his people were encouraged in their faith. They now know that the Lord can use “ordinary” believers to do great works in His wonderful name. They will continue to serve Him in this way after the meetings are over.

John 14:11 Believe me when I say that I am in the Father and the Father is in me; or at least believe on the evidence of the miracles themselves. 12 I tell you the truth, anyone who has faith in me will do what I have been doing. He will do even greater things than these, because I am going to the Father. 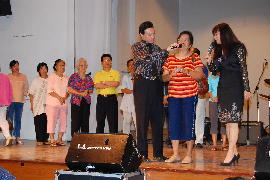 Above & below: waiting in line to testify
of what the Lord did 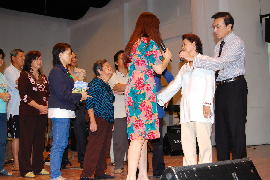 “We had prayer meeting last night. One brother testified that after being prayed for at the first Outreach night, now he can breathe easily without pain. He used to have sharp pain in his heart when he climbed the stairs. Now no more pain. Glory to Jesus Christ!”

On Sunday morning, Jenny Thian gave a testimony at the Emmanuel Baptist Church service. A woman had been pregnant for five weeks when she discovered that she had a large fibroid in her womb. Her Doctor told her that it had to be removed. But because of the baby in her womb, her doctor and father-in-law did not agree to the operation. She and her husband and mother went to the Saturday Evangelistic Healing Rally at the ACS Building.

At the Rally, Jenny laid hands on the lady’s womb and authoritatively commanded the fibroid to be removed in the name of Jesus Christ. During the laying on of hands the woman felt the sensation of heat in her womb. She went up to the platform to testify of what she had experienced. After a few days, she called Jenny to tell her that the fibroid had broken up. She didn’t need the operation anymore.

In her testimony Jenny also mentioned that she and the church were so blessed to have The Elijah Challenge teach them how to take authority over disease and demons in Jesus’ name.

Remember I told you about our German friend Jurgen? Yesterday we ministered “healing at a distance” to him. Last night he said that he felt so much better.