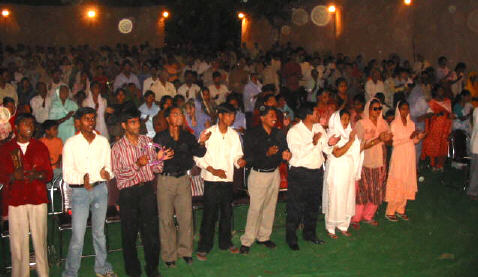 The open-air Crusade meetings in New Delhi were the very first in four or five years following a hiatus on such meetings because of anti-Christian sentiment in the capital city. People with infirmities, including Hindus and unbelievers, came to the meetings because there would be ministry to the sick.

The meetings would be different from the larger Crusades held in years before the ban. Instead of the evangelist ministering mass healing from the platform, pastors and believers trained in a Healing Encounter before the Crusade would be ministering healing one-on-one to the sick in front of the platform. The impartation to minister healing they received at the Healing Encounter would be theirs permanently for soul-winning after the meetings.

At each Crusade meeting, I stressed that we would ask the Lord to give physical evidence for every claim that I presented about Him from Scripture. I variously portrayed Him as the Son of God who had authority to forgive sin; the Only True God; and the One who had brought judgment upon Satan’s work against us by His death on the cross. After each message, I asked Him to confirm it by using the trained believers to heal the sick. They would stand in a line in front of the platform, and the sick would approach them to request healing prayer.

In every meeting, the Lord moved marvelously to confirm His identity as the God of the Scriptures, the only true God who created the heavens and earth. Through the believers He did miracles that only God Himself could do. A blind man could see clearly, the mute began to speak, people were delivered of long-standing pain and infirmities…one man was healed of pain from which he had suffered since 1964. Often so many people had testimonies of healing that we had difficulty giving all of them an opportunity to testify. 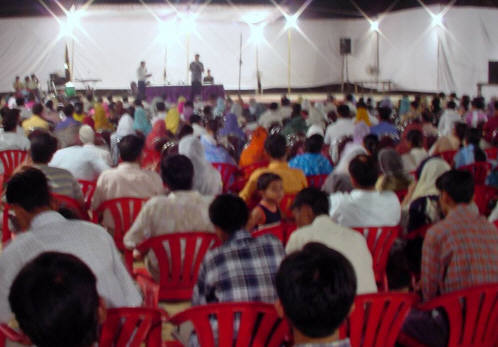 Hindus, many of them women who were identifiable by the red dot on their foreheads, were healed. The outdoor meeting area used for the Crusade had been set up by a man who was a staunch Hindu. He was healed in the name of Jesus and testified.

Afterwards, when an opportunity was given for people to accept Christ, precious souls streamed forward, including the Hindu gentleman. Crusade Host Pastor Simon Haqq of Bethany Church estimated that between seventy to eighty percent of the Hindus who attended the meetings accepted Jesus Christ. 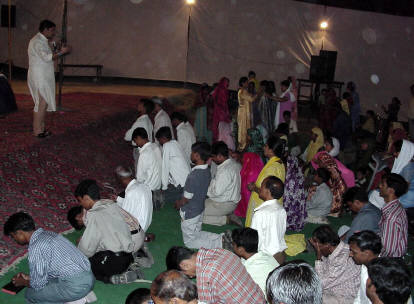 Perhaps even more significant than the meetings themselves is what is being left behind in New Delhi. Some of the believers who were trained at the Healing Encounter in the mornings lived far from the Crusade site and were unable to attend in the evening. Instead they chose to have their own meeting in their own area where they exercised what they had just learned. They reported miracles of healing taking place!

We thank our intercessors for being our co-workers on this trip, bringing protection over me and anointing upon the ministry through their sacrificial prayer covering from above. In military terms, they provided the “air support,” while my role was that of the battlefield commander leading local “foot soldiers” engaging the enemy in hand-to-hand combat. I am happy to report that the forces of the Kingdom achieved their objectives in this invasion:

Local foot soldiers were trained in India as well as in Pakistan and Dubai on this trip. Then in each ensuing attack upon enemy positions through the preaching of Christ’s Kingdom, hostile forces retreated. The firepower He had entrusted to His forces was demonstrated to be absolutely superior as the sick were healed, demons were cast out, and plunder was taken. In each engagement, precious souls, many of them Hindus, were set free from captivity to receive Christ as their new King. Local forces of the Kingdom are now enabled to continue prosecuting the war on their own until the King returns to establish the Kingdom on earth.