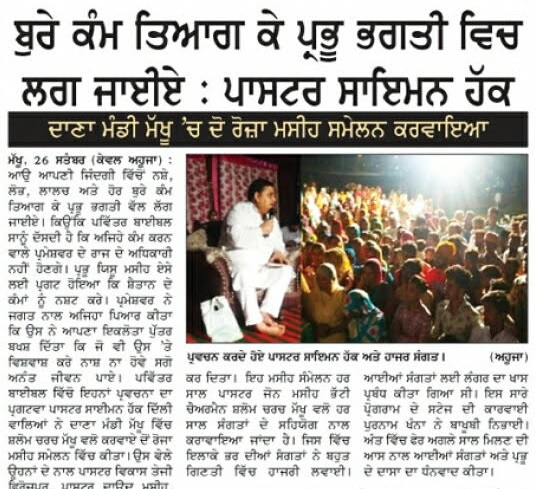 Pastor Simon Haqq hosted The Elijah Challenge Training in North India on several occasions since 2000. The Lord began to use Simon very fruitfully in his meetings where multitudes accepted Christ and thousands were miraculously healed by the Lord. Below is what Simon shared with us regarding a recent event he held in Makku, Punjab.

“A Punjabi newspaper came to our gospel event. They recorded my message, and afterwards interviewed people who testified they had been miraculously healed. After being convinced that the accounts were in fact true, the newspaper published the following report of our event.”

Since he trained with us, on three separate occasions in Andra Pradesh Simon has witnessed approximately one million people raise their hands to accept Christ in each event after he preached the gospel to the multitude which had gathered.

.
Elijah Challenge-trained Pastor leads the fastest-growing ministry in India. At three recent meetings he has seen 10 lakhs raise their hands to accept Jesus—equivalent to one million souls accepting Christ each time—a total of roughly 3,000,000 souls.