Brother Emmanuel was trained at The Elijah Challenge Seminar in November 2004 in Nigeria. Below is his unedited report which we received on September 6, 2005. His torture at the hands of Musl__ms is related at the end of this report under “PERSECUTION IN EGBEDE.” 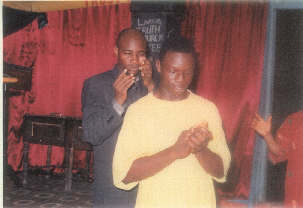 Deaf and dumb man (foreground) is healed in Christ’s name

It was on 14 – 16 April 2005 the healing crusade which was sponsored by an America based Nigeria the first day of the crusade was distracted by rain, when we are about to start the crusade the rain started with heavy wind which scattered all the chairs, throwing down equipment’s and prevented many from coming. We started exactly 6.00pm and stopped 8.00pm.

But immediately after the rain stopped we decided to have a brief meeting which we did I pray for the sick and release them without taking testimony because of time, but to our great amazement almost all the sick were healed as they went home to testify before their family and neibours.

By the second day the school field we used was filled up with people, with a lot of sick people present, eight percent of the people that attended the crusade were Musl__m, because Jettu is a Musl__m dominated area. We took some testimonies that were inspired, among the testimonials a woman testify that her hunchback disappeared, a man testify that a growth in his belly disappeared we tested him and it was so a woman that was deaf in her left hear testify that the hear was open this are some of the miracles that took place the first night.

On the second night God moves tremendously, he beats our imagination and prove that he is with us as we have multiple testimonies of which most of the testimonials were muslems some of the testimonies we recorded were amazing like Goiter disappearing sicle cell anaenia turning AA after test. Seven HIV’s victims healed, they went for test and it was negative, two women testify that the size of their breast reduced as it was swollen before they came to the crusade, a woman with growth in her stomach testify that the growth bursted and discharged out of her private part as she was healed. A man testify that one of his leg was shorter than the other, but after a prayer of faith he discovered that the leg has grown and is equal with the other one, many people were healed of partial blindness.

Many people testify to the Lord goodness when altar call was made people were running out to receive Jesus as their Lord and personal saviour.

On the third day the miracle healing was greatly witness, many people that were possesed by evil spirit were delivered as many were vomitting, falling as the devil left them. 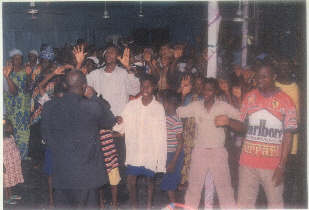 Brother Emmanuel ministering to the crowd

1. I discovered that when the people are focus on Jesus and him alone God releases his healing power.
2. When we spend more time praying in the Holy Ghost our mountain moving faith rises to the optimum and that gives us confidence to minister to the sick and also make us sensitive to the ailment of the people (word of knowledge)

Edjeba community is a stronghold in delta state it is an Uhrobo settlement , many of the indigene don’t like going to church and witchcraft operation is of the highest order.

I announce to the witches that any witch or wizard that will contend with the crusade will be smite by thunder, because anytime men of God organize crusade in this community forces of darkness due scatter it. And we had our crusade without stress.

This crusade was just one day, it was on 24th June 2005, we held the crusade in a church auditorium become of rain. After the message on which i titled ‘’ The price has been paid ‘’ I called out for the deaf and dumb. There were five of them, I prayed for one and he was instantly healed. The one you see in the picture. I asked the pastor and his wife to minister to the rest and there was a perfect result. Among other testimonies was a man with sore in his throat that got healed instantly, a woman that came with issue of blood was healed as I sensed it in the spirit and spoke it, she went to the church toilet and discovered the flow as seized, a woman testify from night blindness ( when it is night she doesn’t see up to two feet } was healed. a man testify that God healed him of three years of insomania, because after the crusade he could sleep, freely Many people respond to the altar call to receive Jesus as their Lord and Saviour.

Ijebu Ife is birth by ijebu Ode one of the strong old of Nigeria. is the toughest land in Nigeria especially in human sacrifices and witchcrafts when it comes to war in the olden days not community dare them because they are highly cooked by demons. Most notable herbalist and spiritist are from there.

But, today Christianity has breakthrough the land but Ijebu Ife where we held the healing crusade and his environment have been occupied by churches. The king who happen to be converted from Isl–m to Christian. In 1960s told me that Christianity and Isl–m have the same population 50 / 50.

The crusade was held on 10 – 13 in a secondary school field. This crusade is in conjunction with Christian Association of Nigeria (CAN) Ijebu Ife Chapter. I was opportune to ministers the second day because there where some ministers who minister the other days. But the crowd prefer me to continue ministering not because I am a good preacher or more anointed than the others but because God wrought special miracle through my hands. Other ministers went there to show their skill, others went to show that they are highly connected and talk more of themselves and their wealth but I just spoke only on Jesus and him crucify just for 20 minutes. And the atmosphere was supercharge with healing anointing. the faith of the people were high as I ministered mass healing commanding the spirit of infirmity, sickness and disease to leave their victims

It was amazing to have fifteen (15) total deaf and dumb healed, instantly by the power of God, we tested them on testimony line as they repeated words after us with clarity. The crowd busted in praise to God other testimonies follows: like myopic eyes healed many women with bleeding problem testify after testing themselves the bleeding stopped. A young man testify that epilepsy left him, we asked him how did he know, he said he felt some forceful wind coming out of his mouth. When I asked about him latter I was told he never experience it again ,before his healing, he due experience it almost ten time on a daily basis.

A man testify to me privately because chance was not given to him due to the time, he said one of his leg was squeeze but during the authoritative commanding decrees his leg straightens. On that day, alone we have over one hundred people healed by the healing power of God.

Actually, that is the only day I ministered and we truly experience mighty miracles, than the rest of the days others ministered. The reason behind my success is that I was trained on how to heal the sick with confidence by The Elijah Challenge. I just flow in healing without stress because I know how.

These are but few healing miracle among others that the Lord Jesus wrought through me for his own glory alone. People ran out before the altar call was made to received Jesus as their Lord with tears running down on their faces. 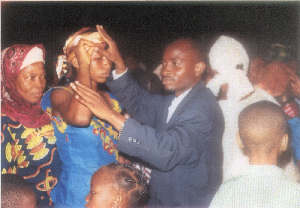 Ministry to the infirm and demonized in Christ’s name

Egbema local government of Imo State invited me for a rural area crusade which started on the 20th June and ended on the 23rd of June 2005.

The crowd in the meeting should was about 5,000 people. I ministered the word of God during the four days with amazing results as many people testify of His healing power. The testimonies were:

1. Three deaf and dumb children healed
2. A cataract disappeared
3. Many leg problems were healed, especially rheumatism and polio
4. Neck problems were healed as five people testified that they couldn’t turn their neck until after the [mass] healing

Multitudes gave their life to Jesus on a daily basis. Notably, witches and wizards were confessing their atrocities after I left and as they confessed, about twenty of them were reported to have slumped and died.

The crusade was schedule to be held on the 28 – 30 of April. Egbede is a strong and violent community in Edo State where many of their sons who converted to Christ were killed. In that same community you cannot find Christians because the sons of the land who are believers hardly travel home because of persecution.

I felt led to host a programme there along with some converted sons of the land. On the first day many Musl__ms were drawn to the Crusade grounds, about three hundred of them. When I mounted the pulpit, suddenly a group of dangerous Musl__m boys with sophisticated weapons emerged and began to beat the attendees. People ran. I shouted that they should leave them alone, that I was the one who gathered them there, that anything you want to do to them do it to me. To my joy they were left alone as the crowd ran to their houses including my Crusade partners.

I was captured and beaten mercilessly. I was locked up in a community cell for three days with a warning never to come to the community again for any reason at all before they released me. The instruments I hired were broken into pieces and I am still paying for them till now.

I still have a vision for that place I believe and God will go ahead and perfect it.

My encounter with the head of witches / wizard in Niger Delta.

I was in my mission office when I had a call when I look at the screen of my handset. Instead if seeing the number of the caller, I saw private, the reason is that I should not know their number.

The caller introduce himself as the head of witches / wizard in Niger Delta. That report as been reaching him concerning me that I have been killing their members and also releasing people they bound. That they will deal with me. I asked of his name, which he refuse to tell me, I asked of his phone number / address, with, the intention of sending it to Brother William’s intercessors, he refuse to tell me. I told him he can do nothing, that the Lord will suffocate every one of them. He now cut off the call. I am ready to deal with them to the core anywhere the Lord led me to hold a crusade.

Up till now since May 15 I have not heard from them. 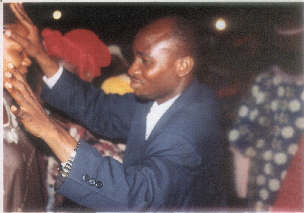