During the morning worship service at the Cornerstone Worship Center, women from Teen Challenge shared their very moving personal testimonies. After that Pastor Logan asked us to lead ministry to the infirm. We had the infirm lay hands on themselves as every believer joined us in exercising the authority over diseases and demons given by Jesus Christ to His disciples for proclaiming the Kingdom of God to the lost.

At least four people were immediately healed and came up to testify.

* One of the Teen Challenge sisters believed she had broken her little finger. She could not move it or even touch it because of the pain. The team leader was going to take her to see the doctor today. After the “mass healing” she screamed in surprise as she discovered that the pain had completely disappeared and she could move her finger and hand normally.

* Another Teen Challenge sister had a one-inch diameter lump on her underarm which disappeared. She felt around for it, but it was no longer there.

* A young man could not speak because of a throat and chest problem and also had a disabled finger on his hand. His voice, throat, and chest were restored. He could move and close his fingers normally. When asked, he said he wanted to serve God.

* Another man had severe lower back pain for seven long years. His back was completely healed and he could bend over and touch the floor with ease. William was not able to do that.

After the service, a team of disciples from the church led by Michael Dyke and the street ministry Take it to the Streetswent out to witness for Jesus Christ. They knocked on doors looking for those with sickness and sin according to the command of Jesus to His disciples in Luke 10:9 (“Heal the sick who are there and tell them ‘the kingdom of God is near you.'”). During the afternoon ten people accepted Jesus Christ as Lord and Savior and three or four people were healed of infirmities.

The following Sunday Michael Dyke and his ministry Take it to the Streets will lead an open-air evangelistic healing outreach in front of a large apartment complex in the community. (See the report below.)

Earlier on Saturday during The Elijah Challenge Seminar, the Lord did a notable miracle as the believers laid hands on a woman in the afternoon session. According to her doctors Jan’s body was extremely delicate and literally falling apart; she had already suffered from three heart attacks. She had so many different physical problems, she described them as “Heinz 57-Varieties.” She was weak and spoke softly. She lacked balance and could not walk without a cane. After four sisters and William laid hands on her, she could feel God’s healing power tingling up and down her upper body. (It remained upon her for some time afterwards.) Her voice and strength and balance were restored and she was able to run back and forth with no help at all. It was quite dramatic to witness. See the photo below. 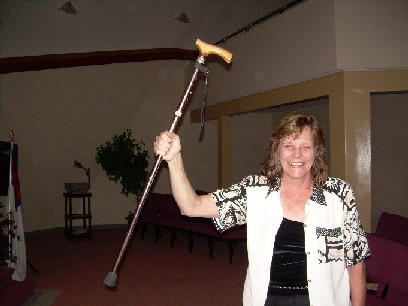 Marvelous are the Lord’s works! We are especially grateful to the Lord because these things are took place in Texas, USA. It’s not unusual for the Lord to do such things on overseas mission fields in less developed countries. Up until now such things were not very common in the USA. But the Lord is now graciously restoring such miracles to the body of Christ in the United States for the fulfillment of the Great Commission there.

Follow-up report from Chris Villasana of Take it to the Streets which began to minister in local apartment complexes following the training:

“The apartment complexes have actually turned into a ‘live rounds’ training ground. We have been taking people out there to lay hands on the infirm and show them how to lead people to the Lord. So many people from the Apartments have been getting to know us—more specificaly the kids, who have passed out more tracts then we could dream of doing on our own. And they asked us for more to pass out at their schools and classes. It is very neat, almost hippy; we are teaching the kids scripture songs, sitting in grassy knolls witnessing and healing people, and leading them in the baptism of the Holy Spirit. And everyone else is watching and coming down to see what’s happening. So everyone is hearing about, or seeing the things that are happening, and everyone is getting to know us. So your training is being put to good use, very good use, and we are taking the people from the church out so that they can keep in practice and keep up their faith.”

“We went witnessing at this park by some apartment complexes and a bunch of kids came and we began to minister to them, singing and praying, and about 24 kids and adults were present. This little girl—she was about about 8 years old—stood up and testified that last week at the apartment complexes how we had come over and laid hands on her mom. Her mom’s leg had been hurting and would swell with fluid, but ever since then it was healed. She also testified that when we laid hands on her friend who couldn’t speak because of a throat virus, the friend was able to talk immediately afterwards. Everyone who was there was in awe. and eighteen people gave their lives to Jesus. One little four-year-old boy was demonically possessed, threatening us saying that he hated us, he hated God and Jesus, and that he was the devil, and the devil wasn’t going to come out of him. So we just used the same authority, and cast it out in Jesus’ name. The boy was totally changed afterwards, even in his countenance, and was telling us he loved us, and He loved Jesus. He was completely happy!”

“I have yet another testimony! While we were out, that same young 8 year old girl whose mother was healed told us that she and her friend were pretending to be us while they were playing in their room. The “church people” and her younger brother came in who actually had a large red bruise on his chest that hurt him, and so she and her friend put their hands on his chest and started imitating us, and said “In the name of Jesus, you can’t stay bruise, you have to go now in the name of Jesus!” and the little boy’s bruise went away, and it was healed. Oh wow! Can you believe it? These kids are seeing the things that we are doing and doing the same things! Many things have been happening, but that was only yesterday! Praise God!”

“A homeless man who was in a wheelchair because he was missing a leg rolled in front of our house. So we came out and started talking to him. He had just gotten out of prison, and had been homeless for 15 days. We brought him in and fed him, let him take a bath, and ministered to him. He told us how he had electricity-like pain in the nub of his leg that was very intense and he had to get used to it now that he was homeless. The bone was also crooked so he couldn’t wear a prosthetic leg. We laid hands on the nub in Jesus’ name, and all of the pain left,. His bone also straightened out. He cried. Then in the same way we took authority over the spirits that were oppressing him, like the one that caused him to feel worthless; and he was delivered. At the end he was no longer hungry, but clean shaven, free from pain, and spiritually healed. Now he can wear a prosthetic! How awesome is the Creator of the universe; He loves us so! I was able to show the homeless man how much God loved him because he had been healed. He really understood how much of a plan the Lord has for him, and that he is always on the Lord’s mind. He really got it—it was no longer a cliché for him. Because God demonstrated His love.”