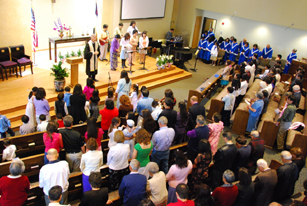 The Chinese Community Church, pastored by Phil Noordmans, had its beginnings in 1885 as the very first Chinese church in San Diego. During most of its history its members were predominantly English-speaking Chinese born and raised in the United States.

Joining together with the mostly Chinese believers for the Basic Training were Vietnamese believers from two different congregations in San Diego. Thus there were people from diverse ethnic as well as theological backgrounds: Chinese Community Church is with the United Church of Christ (UCC), whereas the Vietnamese believers hailed from Baptist and evangelical backgrounds. There was a also a Mandarin Chinese-speaking couple named Andrew and Julia Pan coming to the Training. Julia is originally from Beijing, but came to the US in the 1980s where she came to know the Lord. She is highly educated and was earning a six-figure income with a Fortune 500 energy services company based in San Diego. Recently she took the highly unusual step of giving up her six-figure income to serve the Lord full-time—completely by faith without any offers from any ministry.

On the first evening of the Basic Training there were perhaps 80 people in attendance—more than the leaders expected.

It was a new paradigm for many of the believers—never before had they heard that followers of Christ can actually heal the sick by using the authority entrusted to them for the purpose of the Great Commission. Nevertheless, the Lord opened their hearts as the Scriptures were taught to them. During the demonstrations of healing at the sessions, they faithfully applied what was taught to heal people of their infirmities. The Lord was gracious, and several people testified that the Lord had healed them or touched them physically as the disciples laid hands on them.

One man had a heart condition. When the brothers laid hands on his heart, he felt power like electricity going through his heart. Afterwards his heart felt comfortable. There were many other testimonies as well. The believers rejoiced as they witnessed how the Lord had used them miraculously in accordance with the Holy Scriptures.

At the English-only morning service of the Chinese Community Church yesterday, about 20 students from Mainland China attending the University of California San Diego were in attendance as guests. We preached the gospel of Jesus Christ from John 14:6. We then boldly asked the Lord to prove that Jesus was actually who he said he was—the one and only way to the Father’s house in heaven. We asked him to use his trained disciples to heal the sick who were present as the proof.

A number of people were healed and touched by the Lord as the disciples ministered to them and came up to the stage to testify.

Nate Noordmans is the adult son of Phil Noordmans, the pastor of the congregation. Two brothers, Steve Leong and Andrew Pan, ministered to Nate for the healing of his knee. I was told that Nate’s knee had given him considerable problems for years, requiring medication for the pain which at times made him feel drugged.

After Steve & Andrew ministered to Nate, I told him to go test his knee to see what the Lord had done. To really test his knee, Nate had to get hold of a stick shift car to drive which requires the use of a clutch to be depressed by his left leg. When he drove it and began stepping on the clutch, Nate discovered that there was no pain. The Lord had healed miraculously him as Steve and Andrew ministered to him!

An older sister named Linda had had asthma. Trained believers laid hands on her, and she felt immediate relief. Two days later she left for Hawaii as part of a week-long tour. The trip involved quite a bit of walking on some days. But Linda’s breathing was completely normal throughout the week, and she took no medication. She even spent a day running around at the Swap Meet in the big Aloha Stadium and felt fine.

It was perhaps the first time in the 125-year history of the historic Chinese Community Church—the very first Chinese church in San Diego—that such a meeting had taken place. For us it was the first time we had ministered in such a formal and liturgical setting. Afterwards we received a few very encouraging comments from the people.

After lunch we returned for a 12 noon Healing Service, and more people were healed and testified as the trained disciples ministered.

A sister named Dorothy had had a chronic problem with her wrist. During the healing-at-a-distance (as Jesus did in Luke 7), she felt and heard a sharp “crack” in her wrist. At that moment the Lord healed her wrist completely and there was no more pain. An elderly sister named Ellen had had cancerous sores in her mouth. As a result she could not chew on food with feeling excruciating pain. But after believers ministered to her twice, she was able to enjoy a cracker without feeling pain.

May now the brethren of this historic Chinese church reach out to the community in the spirit and power of Elijah!


Explosion of miracles at the Linda Vista Vietnamese Baptist Church

Later in the afternoon we held another Evangelistic Healing Service, this one at the Linda Vista Vietnamese Baptist Church. I preached essentially the same message. This time there was an explosion of miraculous healings as the Lord confirmed the message through the trained disciples. Many came forward to testify that the Lord had healed or touched them.

This is the difference we usually see in terms of results between English-speaking and non-English-speaking groups. We always see greater and more miracles among the latter group. This is one reason why we believe that the focus of the gospel is shifting toward the non-western, non-English-speaking world in Asia, Africa, and South America. The west has already had the gospel for many centuries and sent out missionaries to the Third World. Some in the west have become hardened to the gospel. Now the focus of the gospel and the confirming miraculous signs is shifting to those who never heard or have had relatively little opportunity to hear.

In response to the gospel and the miraculous healings in the afternoon service, a Vietnamese family came forward to accept Jesus Christ. At the end of the meeting, I proposed to them that they have such an evangelistic healing service once month. Their leader Frank Doan replied enthusiastically they would do it every week!

It was a very fruitful weekend here in San Diego—“America’s Finest City.” Praise be to the Lord ~