The Elijah Challenge Basic Training was conducted in the morning from 9.30 AM to noon. There was no demonstration of healing until the evening healing session. As the sun set, Christians from the neighbouring barrios brought their friends and relatives to join those villagers from Agong Ong village. The crowds rapidly filled the sanctuary at Jesus the Way Church. The warm night was filled with loud praises to the Lord as the congregation sang, clapped and danced in spite of the heat and mosquitoes. Everybody was so absorbed with worshipping the Lord that no one was perturbed by their intense perspiration or insect bites.

Grace presented a special song item and then I shared from the Gospels and the Book of Acts. I related the various biblical incidents of faith and miracles as the people listened attentively. Grace and I could sense their faith increasing by the minutes. The teaching was intended to build up faith and not to simply share the formula about healing. After the sermon, I challenged the infirm to trust God for their miracles and nine people walked up front to receive healing. Those trained believers quickly followed them but they were still a little apprehensive. However, the Holy Spirit’s presence was heavy and definitely He was there to heal.

Pastor Lorenzo Oalican , the Senior Pastor, led the infirm in a prayer of confession and repentance. After that, all the trained believers exercised their faith to heal the infirm. The first stage of the healing exercise was to interview the infirm. Getting to know what to command and heal was vital to the healing success. Pastor Butch Nacua and I took turns in giving the commands for healing while the trained believers repeated the commands. Praise the Lord that the miracles of healing began to take place. Some were healed on the first command while others received their complete healing after a few attempts.

All those who received their healing, were required to testify to the glory of God. A brother who had a throat problem declared that the soreness was completely gone after the commands. His sore back and painful shoulders were healed too. A middle-aged lady also exclaimed that her throat was healed. Another lady with chronic headache was healed and rejoiced that the pain had left her head that very instance. A sister with arthritic knees received instant relief from the pain in the knees. The two sisters who exercised their faith over this healing were visibly thrilled. An elderly lady had a back pain and was healed instantly. A man, who had pain in his chest, rejoiced after being healed by the Lord.

The lady with pain and discomfort in her abdomen gave glory to God for her healing. Another lady was subsequently healed of pain in the stomach after the third command. Later, at the end of the service, with other believers, Grace and I laid hands on the same lady and commanded her cataract eyes to be healed. The “mountain” moved and her eyes improved. Then we invited the rest of the ladies to join us in commanding. By the grace of God, the cataract was gone completely. The lady could see clearly from both eyes and everybody cheered, rejoicing at the miracle. The highlight of that night was when an elderly mother, who suffered from stroke, got up and walked with vigour. All the pain that she experienced in her muscles and joints was gone in the name of Jesus.

The villagers in Agong Ong had seen the hands of the Lord and they later reported that many of them took what they had learned and healed the sick in the hospital and their own barrios. This is the type of Power Evangelism that is needed by all churches. Evangelism that demonstrate the power of the Holy Spirit to heal does not depend upon the presence of a specially gifted preacher or healing evangelist. As such, after the church has been trained, evangelism of this kind will remain an ongoing and continuous feature of the church’s ministry.

The promises of God cannot be denied. When we have faith to believe, we will have faith to receive His authority to heal the infirm in the name of Jesus.

Pastor Lorenzo leads the people in a prayer of repentance 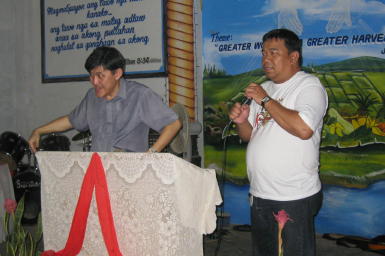 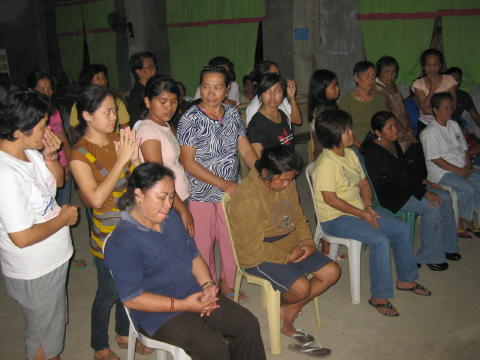 The trained believers getting ready to heal the infirm 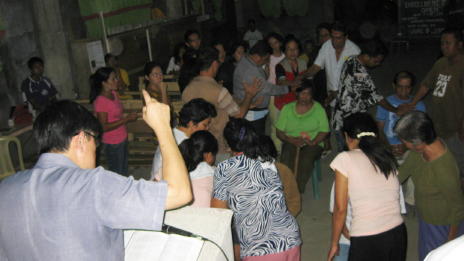 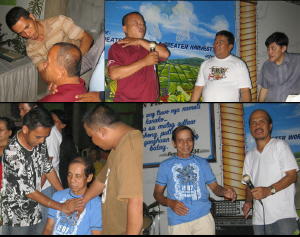 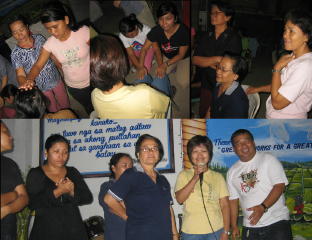 And the Lord heals them all… 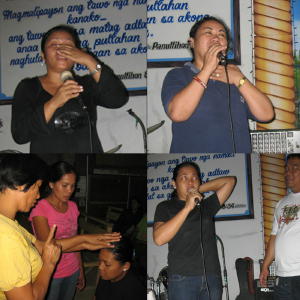 Ladies testify that they have been healed of various ailments

Be healed in the name of Jesus! Walk! 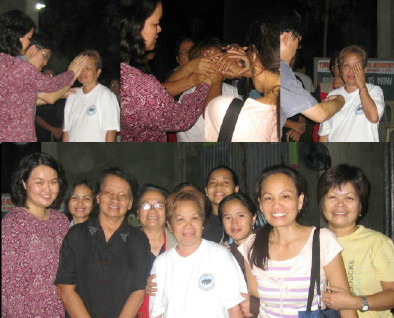