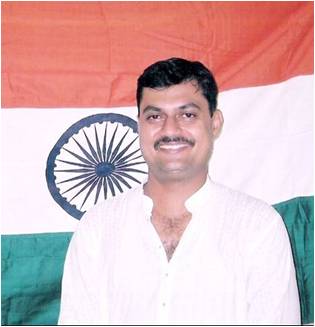 Twenty-eight servants of God, mostly pastors, gathered from thirteen different states in India for the Advanced Training by invitation from Pastor Joshua. Some of these are Elijah Challenge Coordinators in India. Here the Training was at an unusual level. The darkness from both Hinduism and Isl–m in India is so great that the grace of God abounds all the more. We were bolder and more confident than usual in training the servants of God. The demonstration of healing in the afternoon of the first day saw people healed almost effortlessly as hands were laid on them. 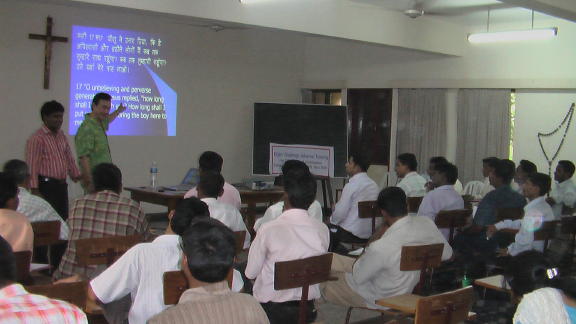 At this Training I met two evangelical pastors who had been trained on our past trips to India—one trip was to Dehra Dun in 2006 and the other to Meerut in 2007. Both of them enthusiastically shared how their ministries had changed radically after training with The Elijah Challenge. One in particular shared how a fellowship he was leading had mushroomed with the influx of Hindus who had been healed of infirmities when he laid hands on them.

The Training opened the eyes of the brethren. One pastor commented that Seminars are usually just theory, and there is no opportunity in the Seminar to apply what is taught. But on the second day I felt an unusual boldness when it came to the demonstration. Two ladies with infirmities had come to the session. One had bulging tumors in her womb and the other suffered from poor eyesight which she had to correct by wearing thick eyeglasses. After one of the pastors had been healed from pain in his wrist and knee joints when two brothers laid hands on him, I asked if anyone else needed to be healed. Our host Pastor Joshua Gowda, Director of The Elijah Challenge Training Centre, pointed to the two ladies. He told me that one of the ladies had tumors. Normally we do not want to take on such “difficult” cases in a demonstration and prefer instead infirmities that are “easier” to heal. The whole point of a demonstration is to show how a person is actually healed of an infirmity in real time during the demonstration itself. Taking on a woman with a bulging tumor as a demonstration is not usually recommended. But I felt no reservations at all in inviting her to come forward to receive ministry. I knew something would happen.

I called a sister named Diyana to lay hands on the woman’s womb and to rebuke the tumor in Jesus’ name. The first time she felt no difference at all in the tumor. I had Diyana lay hands on her again and asked all the others present to join us in exercising the authority over infirmities that the Lord has given His servants for the preaching of the kingdom of God. The second time the woman—a new believer in Christ—reported that she felt the tumor shrinking in size. Sister Diyana laid hands on the tumor a third time, and the woman reported that it continued to shrink. The servants of God were extremely encouraged at what the Lord had done and their faith greatly strengthened. Such miracles normally do not happen during Training, only during public outreaches with the lost. 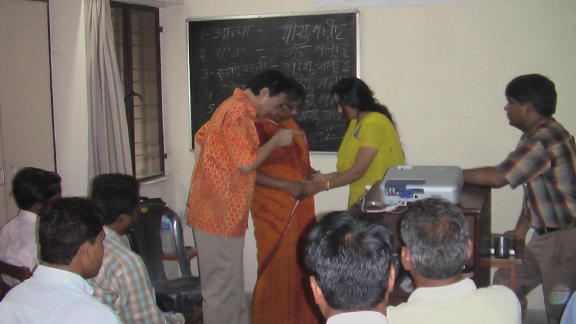 Diyana lays hands on woman with tumors in her womb

Then the second woman with the thick eyeglasses and poor eyesight came forward. Diyana laid hands on her eyes. There was no change. Again Diyana laid hands on her with the others joining her in commanding her eyesight to be restored. A smile appeared on her face and she said that she could see clearly. She returned to her seat and did not wear her eyeglasses for the rest of the day. Again, such miracles have happened during public evangelistic events, but normally we do not dare take on an isolated single infirmity of this type before a group of servants of God as a demonstration. But the Lord had given us unprecedented boldness, and He was gracious to perform the healing in front of His servants. They were immensely encouraged to see that the word of God actually works. Having just witnessed the example that I had given them, they themselves will become very bold in ministering healing on their own when they return to their home towns. 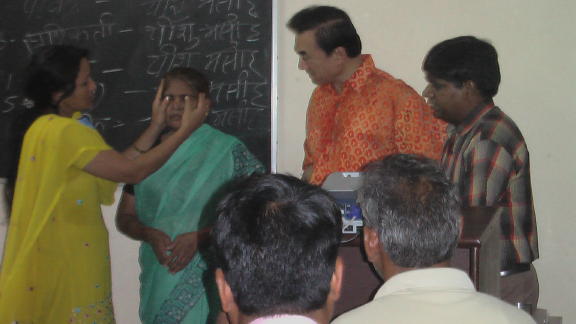 They are now going to give up the traditional way of pleading with God to heal and combining prayer with commanding. They have been taught the Scriptural way of healing the infirm and they have seen that it actually works. We believe that as a result of how the Lord enabled us to train them that day, this crop of pastors is going to be unusually bold, powerful, and fruitful for the Kingdom of God. India—a land of such great darkness—needs such a generation of Joshuas to lead the people to take the Promised Land: to complete the Great Commission here.

Outsiders came to the sessions on the last day to be healed. Nearly all testified that the Lord had healed them or touched them. The woman with the painful tumors in her womb who had come the day before felt them shrink again and when she poked herself in her womb they was no more pain. A growth on a man’s neck shrank. Even a very small Hindu woman who somehow found her way to yesterday’s session was delivered from pain caused likely by demons and accepted Jesus Christ. This is what happened even in a Training session. How much more glorious it will be when God’s people go out to heal the sick and preach the gospel to the Hindus masses where they are. 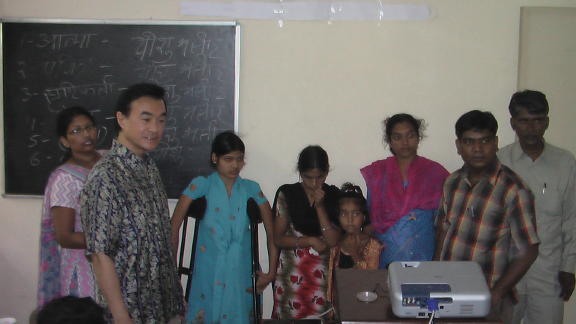 Outsiders come to be healed on the third day 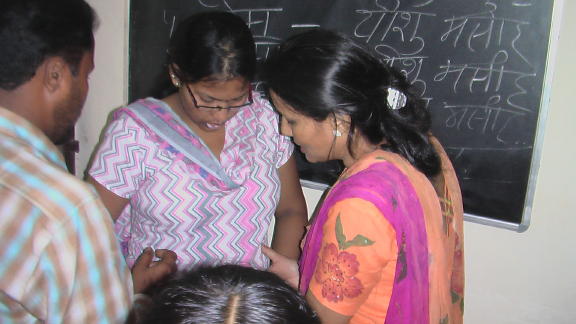 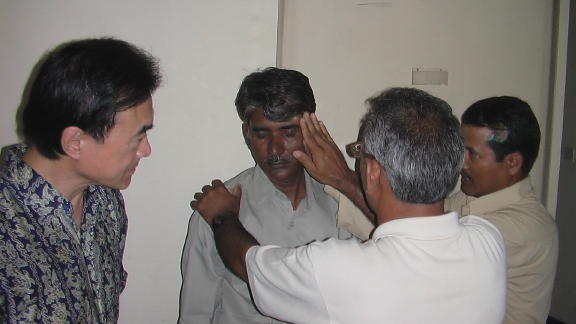 A growth on the side of his neck shrinks 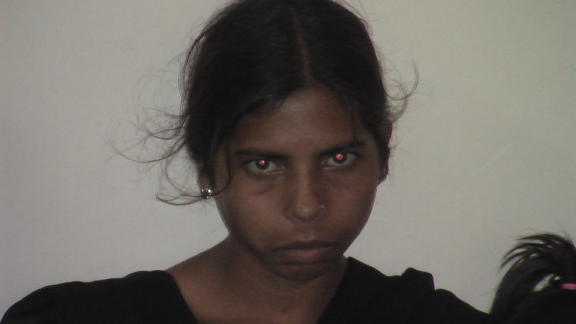 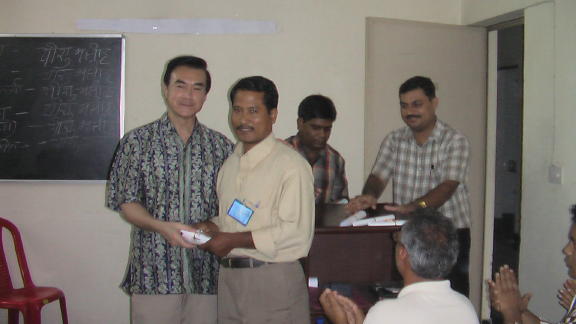 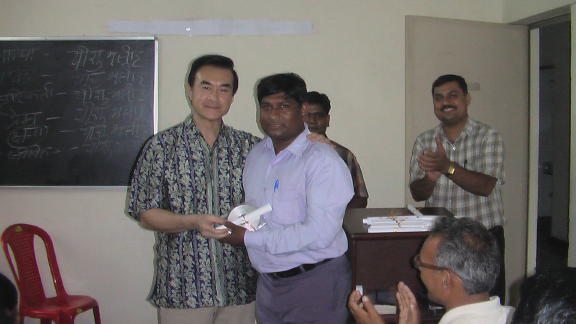 William gives certificate to pastor who ministers to lepers 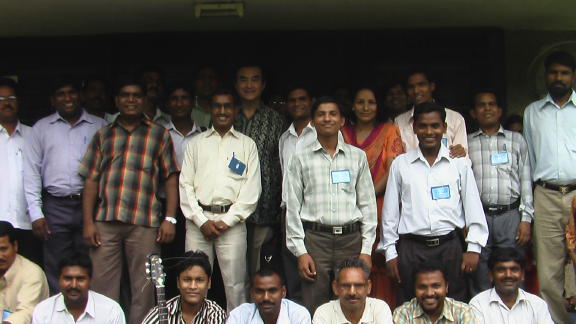 On the third and final day, we were encouraged to hear some of the pastors testify what impact the Training had had on them and their ministries. Never before had they been taught from Scripture how to heal the infirm. In the past they would minister to the infirm in doubt and uncertainty and the results were at best erratic. Now that they had been instructed from Scripture how Jesus himself taught His disciples, they are going to go home and teach their own people. They are going to raise up small armies to go out to heal the sick and proclaim the kingdom of God to the Hindu masses. I am expecting great things from them.

Our co-workers Joshua Gowda and Simon Haqq are both very excited with what the Lord has been doing through them. They’ve planted about ten village churches since last July through Feeding Events. Virtually all the new believers are Hindus or Musl__ms. To their knowledge no one else in Delhi is doing this. Outreaches here usually focus on preaching the gospel to those of Christian background—as it does in the West—and church ministry here focuses mainly on maintaining the flock and keeping them happy and blessed. Joshua and Simon are doing something new, different and very fruitful. Word is getting out to other pastors. If one were to add up all the people in all the churches they have planted in the last year (from July 2007 to July 2008), the number could exceed the size of the largest church in New Delhi.