A total of 82 servants of God gathered from different states in North India for Basic Training II. At the end of each session, we did a demonstration of healing. The Lord graciously healed those who came forward during the demonstrations. 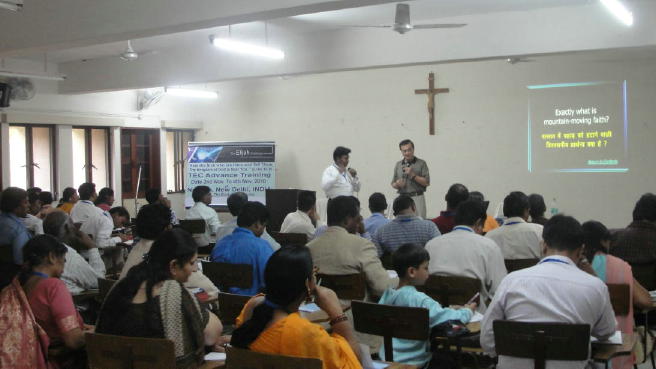 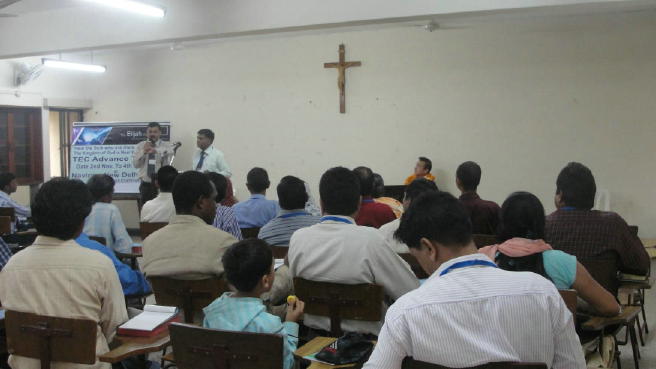 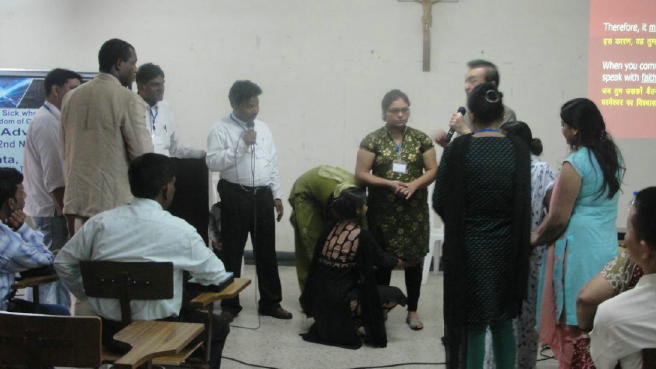 Demonstration of healing during Training session

It appears that the Elijah Challenge Training has been more fruitful here in India than anywhere else in the world. When the Hindus see miraculous healings, they respond quickly to the message of the gospel. Nearly 50 Elijah Challenge churches have been planted in mostly unreached areas since July 2007, with over 11,000 Hindus coming to Christ. Our leaders here are now planning to reach out to Nepal.

Our Elijah Challenge-trained co-worker Pastor Simon Haqq reported to me that the Lord recently opened the door for him to preach before 50,000 mostly Hindus in Andra Pradesh. After the message he ministered healing-at-distance to the crowd. Many were healed, including the blind seeing. 30,000 Hindus accepted Jesus Christ.

Learning to heal at a distance

On the second day of Training, the miracles during the demonstrations were remarkable—especially healing-at-a-distance as Jesus did in Luke 7, done in two different ways.

In the first stage, we ministered healing to the brethren utilizing authority alone while they remained in their places in the room without coming forward. Nine of them immediately came forward to testify that the Lord had healed them in this way. After that I had some of the brethren minister healing to various infirm people over their mobile telephones. Every person ministered to in this way testified from the other end that their symptoms had disappeared. One woman had a heart condition; another woman had constant itch all over her body, and another had pain of some kind all over. There was great excitement among the disciples when they witnessed how the Lord could use His servants to minister healing at a distance in this way, just as Jesus himself did. They have been set free from fear and doubt, and now have mountain-moving faith to heal the sick and cast out demons for the sake of the gospel. 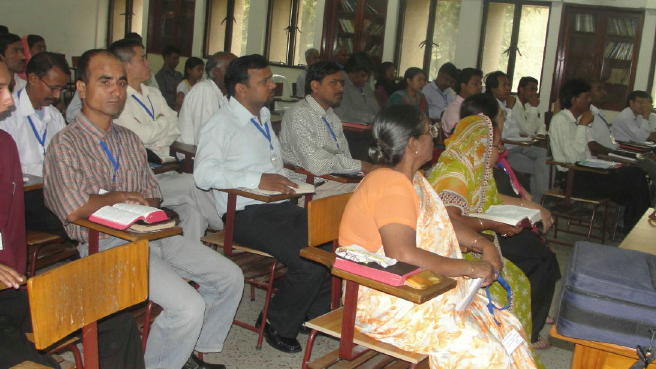 I am not surprised by such amazing results in places like India where the Lord is preparing to reap a great harvest during these last days. I expect to see similar results in China when we go there in the near future. The focus of the gospel and the accompanying miraculous signs is now shifting from west to east, from the more developed to the less developed, from the “already-heard-the-gospel” to the “never-heard.”

The Indian servants of God being trained saw the glory of God. They will go back to their home regions in the spirit and power of Elijah. We will hear from them of the mighty exploits they will do for the gospel.

Perhaps the testimony of one dear servant of God following the Training event can provide some flavor for what the Lord did. She was a faithful evangelist who had served the Lord for 46 years. A bit wizened after many years on the frontlines, her eyesight was fading. She had constant pain in her leg. During the demonstration of healing-at-a-distance (Luke 7) on Wednesday afternoon, the Lord restored her eyesight and she could see clearly. The pain in her leg disappeared. She beamed as she told us what had happened.

Yesterday following the final session, she pulled me aside and told me that in all her 46 years of serving the Lord, she had never heard such teaching from the Scriptures. I was so encouraged. In the photo below, she is standing third from the left. 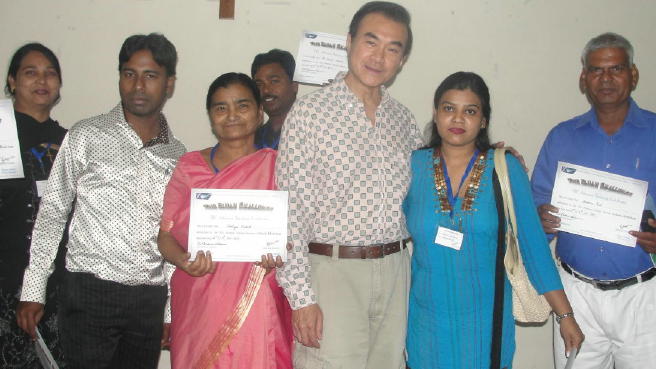 At the very end I laid hands on all the servants of God, sending them forth to proclaim the
kingdom of God in the spirit and power of Elijah. May great miraculous healings now accompany them as they preach Jesus Christ to the Hindus. May they eventually train others and produce much good fruit for our Lord and Savior Jesus Christ. 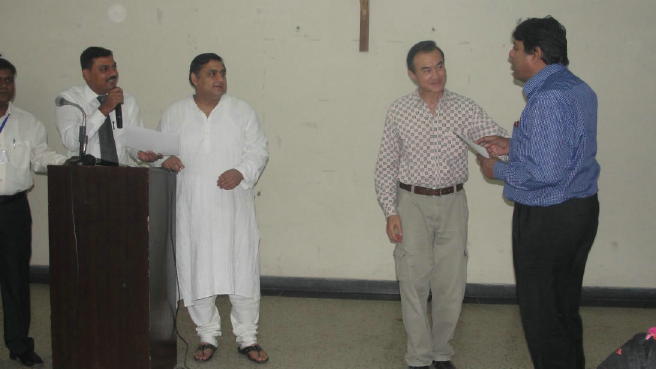 Elijah Challenge certificates given to the participants 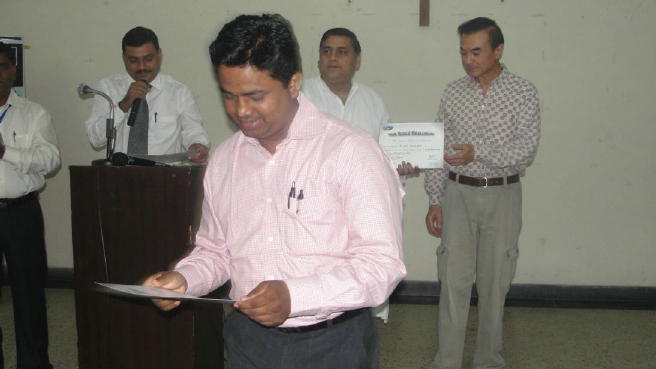 Subodh Jena, a pastor from Orissa, receives his Certificate

“Some of the healing reports after I attended the Delhi Basic Training. Let me share a few wonderful testimonies.

A brother named Banti is a Gym master who suffered a lot from fits since 1993. His parents were so upset. They went to many hospitals and to many doctors. But no where he was healed. I got the opportunity to minister to him. Praise God he is healed.

A man named Sudhir was hited severely on his leg he was not able to walk. According to them the leg was broken. They called me over the phone and I went and ministered him with much boldness. I came from there and did not feel any thing but after half an hour they called and said me that he is walking and it is completely miracle of God.

A sister named Dina has a severe spondelized for last one year. She went to Visakhapatnam hospital (Andhra Pradesh). She had severe pain also in both two hands. But last Sunday I ministered to her. Today she came and testified that she has no more pain and is completely healed. She used to wear some neck cover advised by the doctor. Now she is not using itanymore. 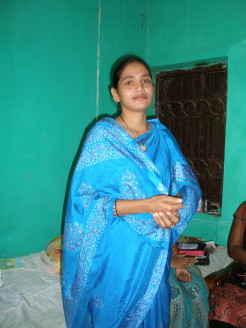 A sister named Rajita had very bad pain in her toe for many months. After I ministered to her she has been healed completely.

A small girl named Miki had severe fever and she was taken to the hospital but not able to even take the medicine. They called me over phone during the night. I ministered to her over the telephone. Within a few minutes she felt better and the fever was gone.” 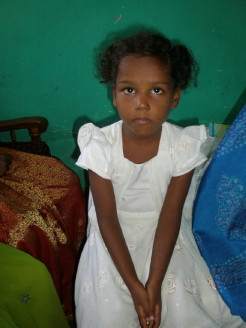 Subodh’s wife Rosy, who was unable to attend the Training along with her husband, wrote the following: “Subodh came home with much power. In fact, he preached the gospel on his journey home on the train from Delhi to Orissa and even brought a few unknown Hindus to our home.”

The following month in December Subodh conducted a historic Crusade in the mountainous area of Tandrang where hundreds of Hindus were healed of infirmities and accepted Jesus Christ. They came from twenty to twenty-five villages around the area to attend, some walking for several hours.