The Elijah Challenge in Australia

The first session of The Elijah Challenge Basic Training in Melbourne, Australia saw about 150 believers in attendance. The second session had well over 200 people. The Lord enabled us to teach His servants in a very clear fashion how to heal the sick as Jesus did for the purpose of demonstrating to the world that He is the only way to the Father. At the end of the session during the demonstration of healing, ten people testified publicly that they had been healed of an infirmity in their bodies as believers laid hands on them. Through the miracles the Lord confirmed the teaching: disciples of Jesus Christ have been given authority to heal the sick and cast out demons as they proclaim the Kingdom of God to the lost.
. 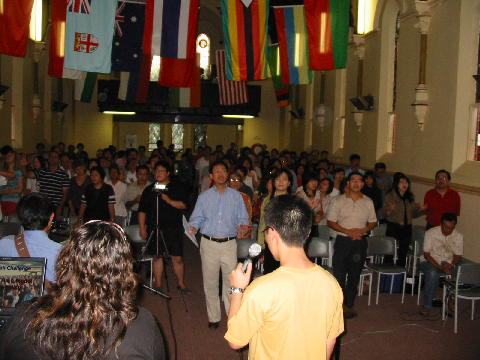 .
Over two hundred believers come for the equipping on the second night

One of the participants came all the way from Kazakhstan in Central Asia to attend the Seminar. He is a missionary named Simon who had been sent from Singapore to plant churches in that predominantly Musl__m country which is sandwiched in between Russia to the north and China to the southeast. He had heard about the Seminar from a cell group leader in his sending church. Simon decided to make the long trip from Kazakhstan all the way to Australia to be equipped. He believed that scriptural signs and wonders are a key to winning Musl__ms to Jesus Christ.

Kazakhstan is the most open to the gospel of all the former Soviet republics which are predominantly Musl__m. (Like Afghanistan, these now independent Musl__m countries have names ending in “stan.”) Simon told us that people from these neighboring “stans” migrate to the prosperous city of Almaty in Kazakhstan looking for a better life. Simon is stationed in Almaty. His vision is to win these Musl__m migrants for Jesus Christ, disciple them, and then send them back to their home countries which are basically closed to the gospel.

There were also two young ladies from near Vancouver, Canada who came to be equipped at this Seminar. Their names were Jules and Sherlyn.

The Evangelistic Healing Service on the final night was blessed with various miraculous healings as witnessed by those who came up to the stage to testify—about twenty in all. The Lord was glorified through His disciples who laid hands on the infirm and healed them in Jesus’ name. Each miraculous healing proved that Jesus is the only way to the Father. The servants of the Lord were excited at what God had given them.

Among others, the Lord used Simon, the missionary from Kazakhstan, and our young Canadian team members Jules and Sherlyn to minister healing with power. In the first Sunday service, an elderly woman who had come to the front with knee problems ran back and forth across the front of the sanctuary after Jule and Sherlyn laid hands on her. She was completely unable to run before. An Australian gentleman who had suffered from constant and debilitating knee and back pain for years was completely set free as Simon laid hands on him. He testified with eyes brimming with tears of gratitude to Jesus Christ.

Simon returned to Kazakhstan, equipped and excited and ready to equip his people to heal the sick and proclaim the kingdom of God to the Musl__ms there. You can read below what he did exactly one week after getting back. Our host Pastor Roland Seow is ready to start healing outreaches in the Asian community of Melbourne. He has received the challenge and the boldness to take the gospel outside of the Church to where the lost are. He and his people are going to obey Christ’s command to “heal the sick, and tell them ‘the kingdom of God is near you.'”

Simon’s report received the very next month in March:

This is Simon writing from Kazakhstan. Thanks for the teaching in Melbourne. I used the materials and taught my church members and we had an evangelistic meeting in our premises on February 19, 2007. There were a quite a few healed of stomach ache, neck ache, varicose veins, was healed of pain in the ear, another was healed of a backache, another was healed of women’s problem. During this period there were about 2 Tatars, (also Musl__ms) mother and son, who believed and prayed to receive the Lord as the Lord healed the mother. She was knocked down by a car recently and was limping, but after being prayed for by the members she was able to walk properly. There were others who came and they saw the miracles and they had a change in attitude towards the gospel, although not ready enough to take a step yet. The only problem as you mentioned is that there were very few unbelievers in our midst. Most of them had ran out of contacts with unbelievers after many years (not a good situation).

I am trying to do something else. Today I am meeting with the director of the Boarding School for hearing impaired children from grade 1 to 12. I praying that they will allow us to bring them out of their premises for a program. We will invite those from grades 9 to 12 and we want to get our church youths to minister healing. We are asking God for miracles to happen and for the youth to rise up in faith of God to heal. Please pray for us.

Report from Elizabeth L. who also attended the training:

Luke 4:18-19 was ‘the’ verse that God spoke through to me in 1974. I love sharing the gospel with unbelievers but had my reservations when it came to ‘healing the sick’. Praise God for a fresh understanding of His word through the ‘Elijah Challenge’ seminar. I agree with John Maxwell that the best way to allow God to write His truth upon our hearts is to quickly apply what we learn.

I give God the glory for His healing of my chronic back pain, AND for activating my faith in ‘healing the sick’ to proclaim the kingdom of God. At around noon on Monday, 12 January, a mailman came to my home with a registered letter. As he turned to leave, he grimaced, and clutched his knee as he descended the steps. I enquired whether he was alright. He said his knee had been giving him problems and that he was in pain. I asked, “Would you like me to pray for you?” He reiterated his condition and I repeated my question. He agreed on my third offer. I established that I am a Christian and that Jesus has given us the Authority, the Ability and the Command to heal the sick. I explained that as I lay my hands on his knee, Jesus will heal him. I proceeded to rebuke the pain and commanded the infirmity to leave in Jesus’ name. Upon the third command, he looked at me and proclaimed that the pain had gone. As I pressed for confirmation, he demonstrated and explained, “Before this as I stepped on it, it was painful. Now the pain is gone, no more pain!”

Glory to God! As was taught in the Seminar, we need Radical Obedience to grow in transition from our ‘Faith in God’ ( I know God can do it ) to the mountain-moving ‘Faith of God’ ( I know I can do it because I have been given the Authority, the Ability and the Command to do it ). A measure of authority over diseases and demons was given to whomever God sends out to proclaim the kingdom of God to the lost. When we demonstrate our ‘Faith in God’ by Radical Obedience, He will reward us with the ‘Faith of God’ that the world may know that He alone is God. To God Be the Glory!