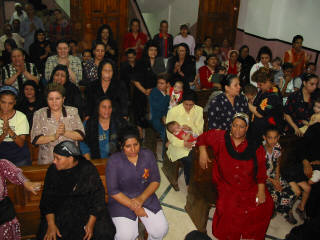 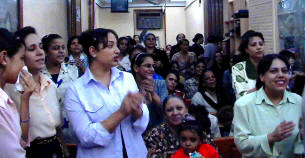 In Cairo we preached nightly in ten different churches at the same time. Team members had the opportunity to “try out their wings” by preaching the gospel, healing the sick, and casting out demons in their own gospel meetings. The Lord was faithful to manifest His power through them. Many precious souls were wonderfully saved, healed, and delivered in these ten nightly meetings.Significantly, in these nightly meetings the Lord began to use team members to minister mass healing, a ministry in which the Lord heals multiple people of their infirmities simultaneously in the meeting. This is preparation for possible mass evangelistic crusade ministry for these team members in the future.

“When I ministered in Cairo I saw between 70-85 salvations and mostly by count.”

“In Cairo, when I preached, there were 27 salvations and 3 testimonies regarding healings that took place that night.”

Several nights ago following the meeting in a Cairo church where I ministered I witnessed a miracle I have rarely seen in my ministry. There was a man in a wheelchair who was a paraplegic due to a spinal cord injury suffered in a car accident. For twenty years, this man was unable to feel or move his legs the slightest bit. He thought that this was the one type of injury that God could not heal. But as I laid hands on his spinal cord, he felt God’s power in his legs. He made a valiant effort to stand up out of the wheelchair. At the service the following evening, feeling began to return to one of his legs after team member Donna Elms ministered to him. The following night when it was Jennifer Campbell’s turn to minister at that church, he reported actually feeling his spine “growing out” as she and the believers prayed over him. We all rejoiced at what God has begun to do in this gentleman….we believe with certainty that as the local believers continue to pray over him nightly, God will soon complete the work which he began and he will get up and walk in Jesus’ name!

“During my second evening at the Embaba Giza church I had the believers lay hands on the sick and minister healing. One man had pain in his left elbow and upper arm (I do not know the cause of the pain). As the brother ministered to him the pain left — he acknowledged it by working his arm back and forth. Praise the Lord! There were others who said they were healed, but I really do not know for sure. In addition, at one of the Peniel churches after the service we had a meal at the home of one of the older gentlemen. His daughter had been suffering from lower back pain and head aches, but the Lord healed her that night as I prayed over her.

On the second-to-last-night in Cairo, my interpreter and I got lost and walked about 2 hours in the dark trying to find the church, but a Musl__m man led us to the church and he stayed for the service. That night a man was gloriously delivered from demons – it took about 2 hours but when he was free he was truly free and confessed Jesus as his Lord and Savior. After all this, the Musl__m man asked for prayer. I prayed for him and asked the Lord to be real to him—I did not know he was a Musl__m. After praying for him I looked up and big tears were in his eyes; he wouldn’t let go of my hands and he kept telling me he loved me. It was the God kind of love. Well, he escorted the pastor, interpreter, and myself back to the highway to catch the taxi. There again he grabbed my hand, told me he loved me, and his eyes began to well up with tears. I still did not know he was a Musl__m. As he left the interpreter turned to me and said, “did you know he was a Musl__m?” Well, the Lord did something in his heart, and I will not know exactly what until eternity. But that night I will never forget. As we walked to the church—lost—we tromped through more garbage than I had ever seen in my life. The stench of sewage and trash and trash burning was unreal. It was everywhere. But God gave me much grace! I wouldn’t trade these experiences for all the money in the world. To see the man freed from demons and to see this Musl__m man’s face were priceless!

I think of Sister Solfol at one of the Peniel churches. God set her free and delivered her. She had been in witchcraft earlier in her life, but the power of God is greater and set her free and she was delivered and received Jesus as her Lord and Savior. She later said that was the first day of her life, she felt such joy and happiness and she really looked different. Praise the Lord!”

“In Cairo, I preached 7 times in 7 different churches. It’s the first time I’ve ever preached in a church and honestly I was pretty nervous. But God in his mercy used me and spoke through me just as he promises in Scripture. During those 7 services, about 50 people responded to an invitation to receive Christ as Savior and Lord. I’ve discovered that I actually enjoy preaching and teaching from a pulpit. I also had the opportunity to pray for the sick and many people got healed. After one service as I was praying for the sick, my interpreter advised me that a Musl__m woman had come for prayer and that I should go to her immediately. It was quite rare for a Musl__m to enter a Christian church so she must have been desperate. I’ll never forget the dark, death-like look that she had on her face. She explained how she had fell and hit her head years ago and had been suffering from non-stop headaches ever since. I placed my hands on her head and rebuked the pain. She began to smile as she told us that her headache was gone. God healed her as he healed so many others. I told her to give Jesus the glory.”

“While in Cairo I was in mostly the small Peniel churches. I would say I witnessed about seventy-five salvations for the whole week in Cairo. There was never a night I ministered in Cairo where there weren’t any salvations.

A memorable moment was when a group of young men joined with me as we prayed for a man in a wheelchair who had been a paraplegic for many years. These young men had learned about their authority over sickness and disease. The man in the wheelchair said he could feel his spinal cord growing! But better than this was the group of young men who are still in Egypt who are now equipped to destroy sickness and disease in the name of Jesus.”

“In Cairo it was a joy to bring the Good News to the many churches we were scheduled in. At each service I preached there were from two to thirty people that responded to the gospel in faith. It was amazing how God worked at times. A couple of times I went to a home to pray for someone who was ill and there would only be a few people in the home. But before I was through praying the house would be full of people and many would receive Jesus into their hearts. Once again I witnessed God heal many people of various infirmities through the laying on of hands and also in ministering mass healing.”