Nearly three hundred people from various area churches registered and showed up for the first session of the three-day Elijah Challenge Seminar. Although there was a heavy downpour outside the first evening, the auditorium where the equipping was held was nearly full. We were pleasantly surprised by the number of people whom the Lord brought through Pastor Alvin Tan of High Praise Ministries, the organizer of the event. 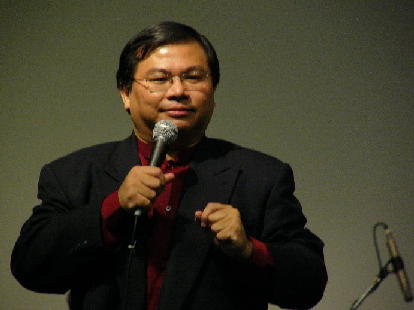 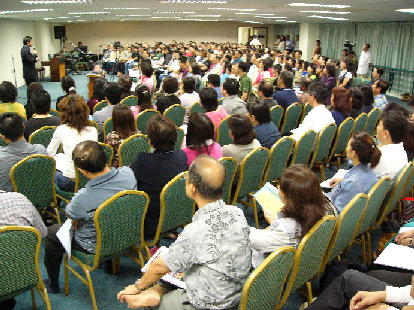 The Lord graciously anointed us to teach and equip His servants. No one was bored or restless…it was new and arresting for them. At the end of the first 3-hour evening session we had a demonstration. The Lord graciously moved to heal the infirm as we and other believers came up to the front to lay hands on the infirm.

At the very end of the evening, we had the people with infirmities lay hands on themselves as the entire body of believers exercised its God-given authority over disease and demons. The result was quite powerful as several people came up, some almost running, to the front to give the Lord the glory for healing them. Some were quite powerful healings from long-standing infirmities. This is a wonderful result for a prosperous city like Kuala Lumpur where the Church is dealing with the temptation of materialism, as in the United States. Miraculous healings here are rare. To witness miracles of this sort, Malaysian believers usually must go on a mission trip to a poor and spiritually-dark country like India. The Lord demonstrated quite clearly to His people in the Equipping Seminar that He has given authority to them to heal the sick for proclaiming the Kingdom of God to the world.

Following the Seminar came the climax of the event—the Evangelistic Healing Rallies where the newly-trained believers would heal the sick to prove to the lost that our God is the only true God and that Jesus is the only way to Him. 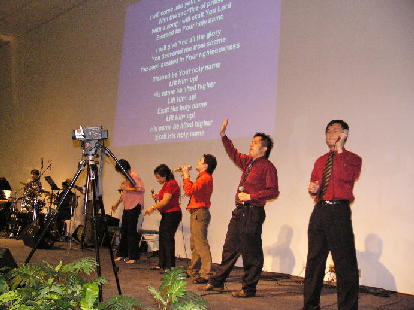 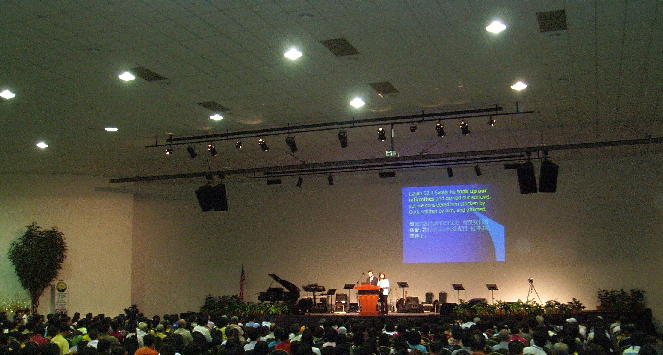 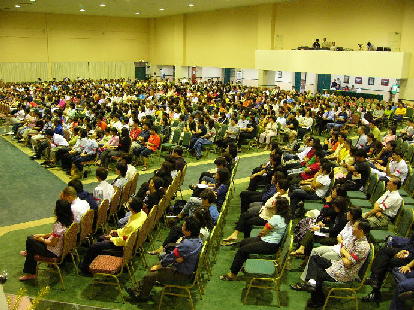 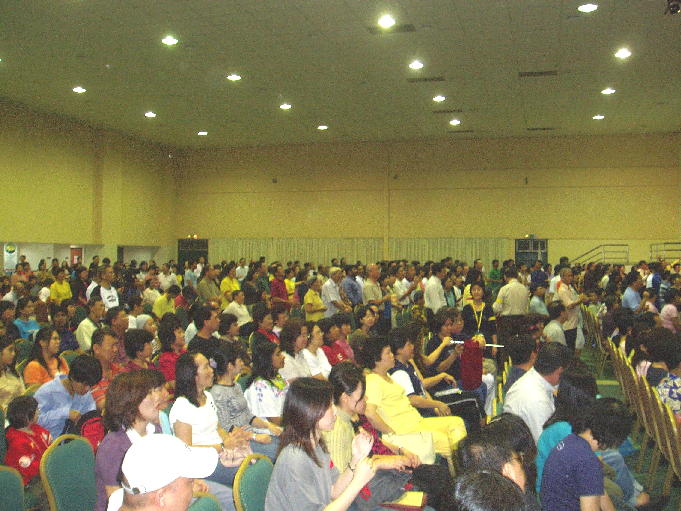 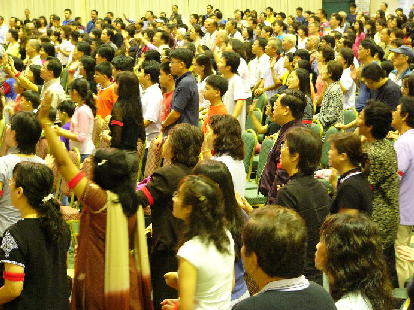 At the Evangelistic Healing Rallies held in the large auditorium of Full Gospel Tabernacle, we witnessed great victories for the Kingdom of God. In the very last meeting on Sunday evening, We preached the gospel according to John 14:6. The believers trained in the Seminar then ministered to the infirm with great faith and effectiveness. 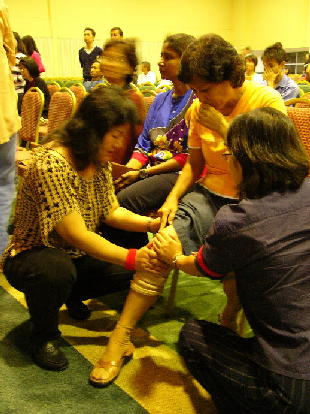 Above & below: Laying hands on the infirm in Jesus’ name 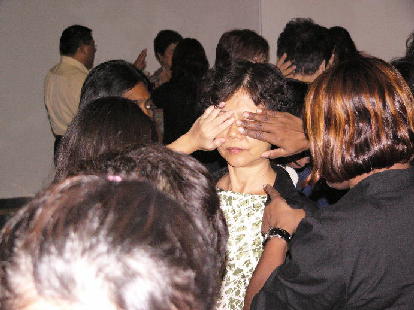 There were very many testimonies of miraculous healings as people lined up on the stage to thank the Lord for what He had done for them. In particular, people who had come with cancer reported relief from the pain caused by the disease. Elderly people testified of their eyesight being restored. Others strutted and squatted on the stage to show that their infirm legs had been restored. One young lady was dramatically delivered from six demons and afterwards saw the Lord Jesus in a vision. The reports were too many to remember and recount. The name of Jesus was greatly glorified. One elderly man who came to the meeting in a wheelchair was able, with help, to climb up to the platform to testify (see photo below). 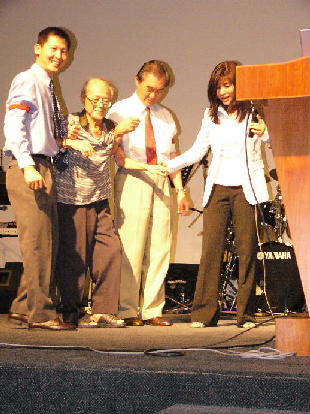 Elderly man climbs up to the stage to testify 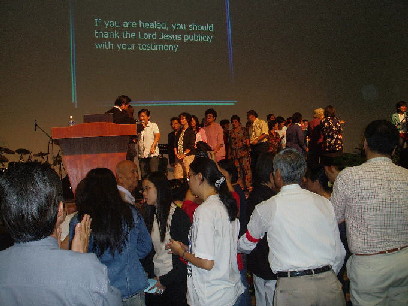 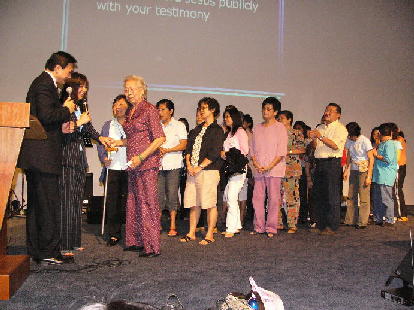 People who are healed line up to testify

Above: Elderly woman demonstrates she is healed 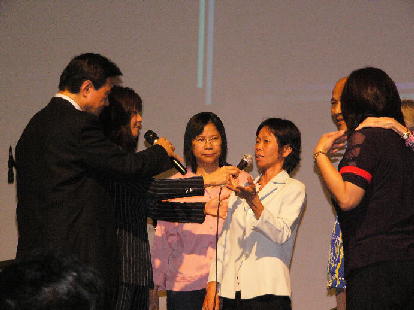 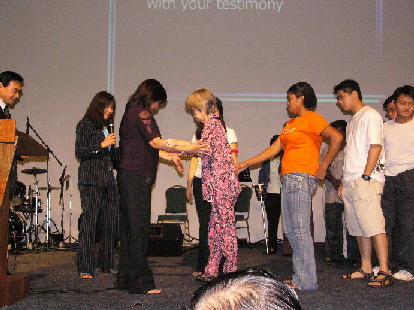 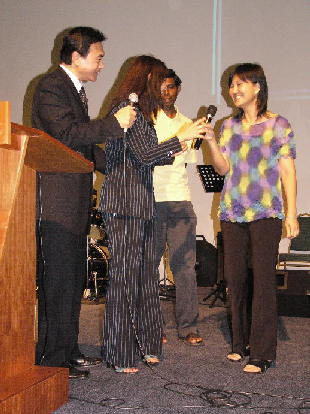 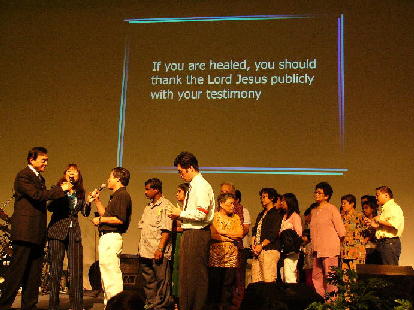 Above photos: People testifying that they are healed

After all these testimonies we proclaimed the Kingdom of God to the people. All the miraculous healings proved that the only way into the Kingdom of God was through Jesus Christ who died on the cross to bear man’s sin. When the lost were invited to renounce foreign gods, to repent of their sins, and to put their faith in Christ Jesus alone as Savior, they streamed to the front. Many of those who made the decision to follow Jesus Christ for eternal life were Buddhists and Hindus. 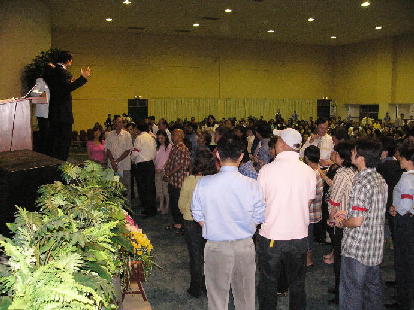 Above & below: souls come forward to follow Jesus Christ 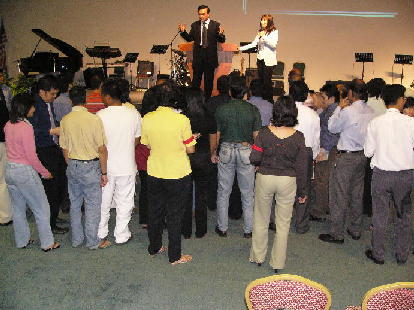 We can say that the equipping of the saints with the spirit of boldness and power through the teaching of the word of God has been successful. We are confident that this impartation is permanent; the believers are going to continue to preach the gospel with power. The Lord is fulfilling here his promise in John 14:12—those who believe in Him will do the works that He did, in particular preaching the gospel, healing the sick, and casting out demons. There will be no more need to depend on one-man-show, superstar evangelists to fly into town for huge meetings in which miraculous healngs take place. The age of the body of Christ—the nameless, faceless believer—has begun. 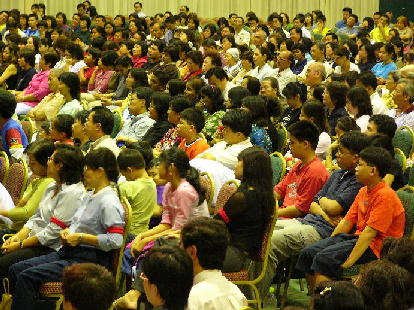 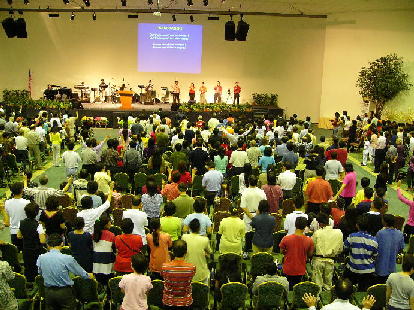 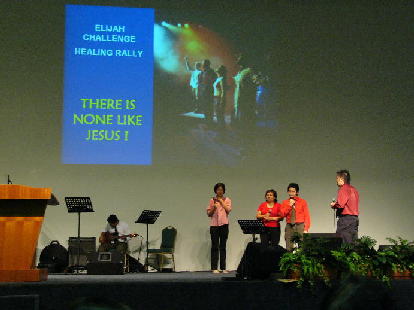