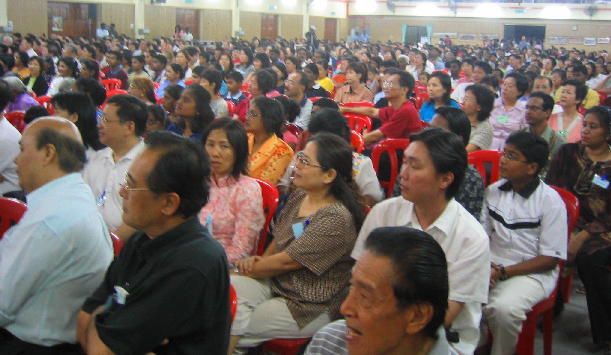 .
In July 2004 the Lord opened the door for us to minister in Musl__m Malaysia along with teammates Sarah and Christina. They held training & Crusades in the capital city of Kuala Lumpur as well as a city-wide Campaign in Ipoh, two hours north of the capital. While we taught the adults, teammates Sarah and Christina were busy teaching the same principles to the children who attended.

Malaysia is a prospering economic powerhouse in Southeast Asia where in some ways the churches are beginning to resemble churches in the United States. Many churches are mature; they are giving and sending churches. And just as in the United States where churches immersed in secular western culture rarely encounter the supernatural, miracles are not commonplace in the life of Malaysian churches. In order to witness miracles, Malaysian believers must go on mission trips to Third World countries like India.

In Ipoh the meetings were organized by the Secretary of the Ipoh Pastors’ Fellowship, Pastor David Tan. Prior to the meetings there was a serious need for revival among the churches. Moreover, with three different language groups—English, Tamil, and Chinese Cantonese—there was a lack of unity between churches. Even within the Tamil-speaking churches and Chinese-speaking churches of the city there were troubling fractures. On top of that there was the usual divide between conservative evangelical churches and their charismatic counterparts.

Bringing the pastors and churches together for a meeting would be difficult, especially in the spiritually lethargic climate of the city. But the Lord gave grace to Pastor David to personally visit the pastors of the city, not to invite them to attend a teaching about healing, but one that might enable them to further the Great Commission. It would be a teaching to raise up an army of nameless and faceless believers who could prove to the world that their Lord is the true God through miraculous healings. In the beginning Pastor David prayed for an impossible goal of 500 registrations knowing that even if 300 people signed up it would be a satisfying turnout.

But Pastor David’s approach struck a responsive chord with the churches, and to everyone’s amazement approximately 650 pastors and leaders from over thirty churches representing the entire spectrum of the body of Christ in Ipoh showed up for the two evenings of training. It was historic for Ipoh. The Holy Spirit Himself also graciously showed up, and infirm believers were healed at the demonstrations which capped each evening.

Then began three evenings of evangelistic rallies. The first two evenings for English and Tamil speaking people were attended by over 2,000 people. We told the crowds that Jesus was the only way to the Father and the Lord used the trained believers—both evangelical and charismatic—to heal the sick in the name of Jesus as indisputable proof that He was indeed the Son of God. When the invitation for salvation was given, precious Buddhist and Hindu souls responded. On the third and final night with Cantonese-speaking people present, forty-four mostly Buddhist souls streamed to the front to accept Christ as Lord and Savior. The gospel was so convincing because of the miraculous healings which confirmed its truth. Among many other miracles of healing done in the name of Jesus by the trained believers was that involving a young woman who was completely deaf and dumb since birth. She demonstrated before the amazed crowd that she could indeed hear and speak for the first time in her life. 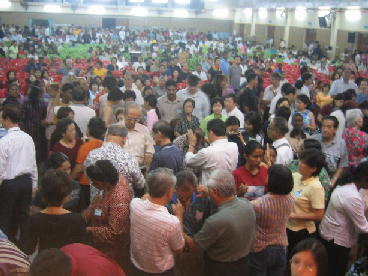 Trained believers heal the sick to confirm the gospel

Of greatest significance is not the total number of souls which accepted Christ during the three evenings. What is most noteworthy is that unlike a typical evangelistic healing service in which the speaker does all the ministry, the Lord used the trained local believers to publicly minister healing to the sick. We only preached the gospel. The conclusion is that a special gifting for healing given only to an elite few is no longer a requirement for an effective evangelistic healing Crusade. We are now in the last days and the Lord is restoring His power to the whole Church, to every witness of Christ. The dry bones of Ezekiel 37 are being resurrected to form a mighty army for the Lord.

Pastor David Tan wrote to us, “We believe that the Lord sent you to teach the evangelicals and remind the pentecostals & charismatics again of things that one part of the body had ‘missed out’ and the other part of the body had slowly left ‘defunct’ due to carelessness and disuse. The feedback I’ve gotten so far is very positive. Many evangelicals….have been most impressed with the ‘systematic and biblical way’ the subject was taught!” 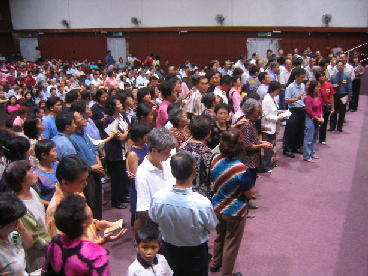 Buddhists and Hindus accept Christ as Lord and Savior