m
On March 25 (Good Friday) after arriving in Pontianak, we took a three-hour speedboat ride to Batu Ampar where we had a joyful reunion with the believers over whom we labored for seven years from 1980 to 1987. The story is in our book, Dancing on the Edge of the Earth. They have continued in the faith which we shared with them years ago. In the evening we ministered at their Good Friday service, and with the help of the Lord we re-ignited their faith for the powerful signs and wonders which occurred in their midst during the earlier years of the church. Several miracles of healing took place during the course of the meeting.

On Saturday the next day we returned to Pontianak by speedboat and held our Seminar on the End Time Model of Evangelism in the morning and afternoon, followed by a Crusade meeting in the evening. An elderly man who had been paralyzed by a debilitating stroke had been brought to the Crusade meeting by his sons. During the time of mass healing, he suddenly stood up from his seat, rejecting help from his sons, and began to walk. Back and forth in front of the people he paced briskly, raising his arms in the air in victory over his infirmity. The people erupted in praise and astonishment at the miracle they were watching. Quickly I told them that the miracle was the proof that Jesus had authority to forgive our sins. (See Mark 2:1-10 where Jesus healed a paralytic to prove that He the Son of Man had authority to forgive sins.) Later more miracles of healing occurred as the believers trained in the Seminar ministered to the sick. When I gave the invitation to accept Christ as Lord and Savior, precious souls responded, having heard the Word of God and witnessed the confirming miracles.

On Sunday morning there was still another Crusade meeting that was broadcast throughout West Borneo on the radio a couple of hours later. The listeners heard the gospel as well as the testimonies of people who had been healed, including a man whose hearing was restored after 30 years of hearing deficiency. In these meetings we also met people whom we had discipled decades ago in Batu Ampar when they were still children and who had since moved to Pontianak after growing up. They are faithfully serving the Lord, some as pastors and pastors’ wives, some as successful businessmen. They brought their children for us to see, introducing us to them as “Grandpa and Grandma.” We really don’t feel or look that old, but we were so honored. What joyful encouragement the Lord gave us to be reunited with them after the passing of 18 years when we last saw many of them! 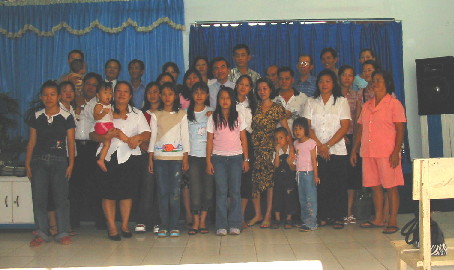 At 6 AM also on Sunday, we also ministered in the Sunrise Service of the Pentecostal Church of Indonesia (Gereja Pantekosta di Indonesia) in Pontianak. It was Pastor Luwuk, the gentle Dayak pastor of this church (now with the Lord) who welcomed us and provided a legal covering for us when we arrived in Pontianak in 1980. The Lord graciously used us to return a blessing to this church as miraculous healings were performed in the name of Jesus Christ during the meeting. One of the miracles involved a sister with a chronic thyroid condition that disappeared. The swelling of the glad had simply vanished during the time of healing ministry. On Sunday evening I ministered in one of the largest and fastest-growing churches in Pontianak, River Jordan Church (Sungai Yordan). They have 100 hundred full-time workers in West Borneo. Once again, the Lord was gracious to multiply miracles of healing during the service.