Elijah Challenge Events with Vietnamese Churches around the World

One week before Christmas 2004, Brother William met with a group of disciples of Christ at the Freedom Worship Center in San Jose, California. He trained them in preparation for a Christmas Crusade targeting the gospel-resistant Buddhist Vietnamese community.

Mostly unbelievers came to the Crusade meeting, likely drawn by the hope of healing for their physical infirmities. Infirm believers also came, and the church sanctuary was nearly full. In attendance were also eight non-charismatic pastors from Baptist and Christian & Missionary Alliance Churches. Brother William shared the gospel concisely and briefly. He asked the Lord to demonstrate that He indeed had authority to forgive sins, thus delivering the Vietnamese Buddhists from punishment in the afterlife for their sins. The demonstration would be the miracles of healing in His name.

Then William invited the trained believers to come forward to minister healing. The sick also came up for ministry. And the Lord did wonderful miracles. A man confined to a wheelchair for several years stood up and walked. People with deafness in their ears could hear. Sight was restored. A woman with difficulty speaking could speak. There were forty known testimonies of healing. Many of these came up to testify. 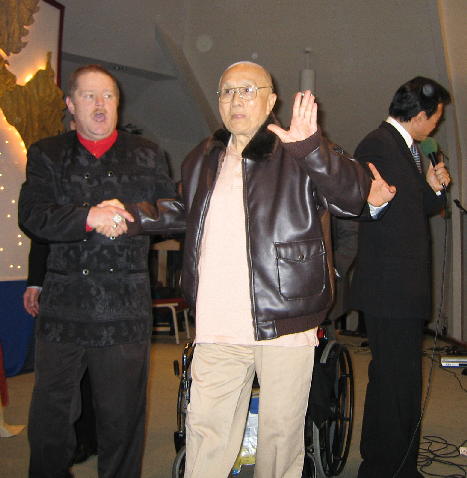 When William gave the altar call to accept Christ, twenty precious Buddhists came forward for the forgiveness of their sins. There was much rejoicing in the church hall as well as in heaven. This was the first time such an event had happened in the predominantly Buddhist Vietnamese community here.

This is just the first of many such meetings for the Vietnamese churches in San Jose. Pastor Hoa Tong of the Freedom Worship Center will most certainly continue them in his churches and outreaches. The eight evangelical pastors present were very pleased and want to work together with the charismatic churches on larger scale training and evangelism in the future.

One key evangelical leader wrote: “I thank the Lord for the opportunity to witness his miraculous healing and mercy poured out on the Vietnamese community during your last crusade event in San Jose. Praise God for the victory in Jesus’ name and thank you for spending your precious time with us during the training and evangelistic event. I have been talking to a few [traditional evangelical] pastors and leaders in the San Jose area to learn about their interest in organizing a summer 2005 evangelistic and training event. Most of us are very interested in learning the authority-based healing method as an important tool to advance His kingdom and minister effectively among the Vietnamese community.”

A reporter from a Vietnamese secular newspaper was present and took down the testimonies of healings for publication. According to Crusade organizer Thuy Kropp, his article said that “our program was well organized, skillful, and enjoyable…the audience was totally into it. The most important part of the evening was the healing part… (The article) did a good job summarizing the (salvation) message. The message was preached again through the newspaper! In fact, this morning, a gentleman called my sister Van saying that he read the newspaper and wanted to be healed. We’ll get to see him this Sunday. The column also describes in good detail what really happened to the people who got healed and their testimonies.”

It was a great victory for the Kingdom of God in the Vietnamese community in San Jose, the beginning of its advancement toward the fulfillment of the Great Commission here.